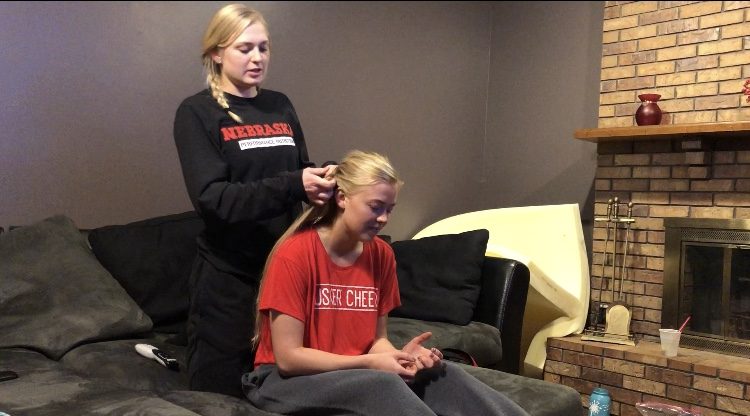 When two overachieving sisters have competed in many of the same sports, had some of the same injuries, and even have the same major it should not be surprising that they chose the same college to attend.

Maddie Yerigan, 20, and Stephanie Yerigan, 17, are both student-athletes at the University of Nebraska-Lincoln. Both girls danced, played soccer and ran track, but decided to pursue different events in college.

Maddie was a standout high jumper in high school and competed at the 2015 World Youth Track and Field Championships. She chose to compete in high jump at UNL, but found other interests when she joined the team.

The UNL men’s and women’s pole vault and multi-event coach, T.J. Pierce, said he and the coaching staff debated which events to put her in for the best interests of the team and herself.

“The only problem with Maddie is, well gosh, she could be good at just about anything, so which one do we pick?” Pierce said.

Despite also running track in high school, Stephanie decided to pursue cheerleading at UNL. She is one of five girls and one of just three freshmen added to UNL’s Spirit Squad this year.

Stephanie has been dancing since she was two years old and began cheerleading when she was 14 years old. She was the youngest ever to dance the lead part of Clara in the Stanwood Dance Company’s Nutcracker performance.

Despite her dancing accomplishments, Stephanie says it was because of Maddie that she chose UNL.

“I feel like the only reason I really came here was because of Maddie,” Stephanie Yerigan said.

Maddie disagreed. UNL’s cheer team does not perform stunts, so Stephanie was able to use her extensive dancing background to land her a spot on the team.

“Since Nebraska doesn’t have stunting, Steph was actually able to try out for cheer instead of just the dance team,” Maddie Yerigan said.

Stephanie excels at cheering for UNL and has already cheered at various events including football games, volleyball games and many more.

Maddie comes to support Stephanie cheering every chance she gets.

“We are used to having our parents at every single sporting event, so for me it’s exciting because people ask which one she is and I get to say, ‘Oh, she’s the cute blonde one,'” Maddie Yerigan said.

Stephanie is waiting for her opportunity to support her sister. Maddie suffered an ACL injury just before the start of the 2018 outdoor track and field season. She will hopefully begin competing outdoor pole vault in the 2019 outdoor season.

“It’s nice being able to support each other, and I actually like watching pole vault,” Stephanie Yerigan said. “It’s an exciting event.”

Stephanie also suffered an ACL injury when she was in high school so she is able to relate to Maddie on her recovery process and help to boost her morale.

Samantha Cowger, UNL’s Assistant Director of Life Skills, said the two girls not only boost each other’s spirits but they also help create a positive impact on the Lincoln Community.

Stephanie makes appearances as a cheerleader and Maddie avidly volunteers in various events including mentoring, tutoring and many more. Maddie was even named as a recipient of the 2018 Sam Foltz 27 Hero Leadership Award.

Attending the same college has also enabled the two girls to remain closer with their parents’ back home.

The girls are able to get together and Facetime their parents and older sister. They said is feels more like home that way. They also said their parents have twice the reasons to come visit now.

Despite their similarities, the two said they live separate lives at college but try to see each other at least once a week.

“We usually get together on a Sunday or something,” Maddie Yerigan said. “We like to go on Target runs, get food, make brownies, go shopping or do hair.”

Stephanie loves being able to spend quality time with Maddie and thinks she has helped her adjust to life in college.

“It’s been really helpful having Maddie here, I haven’t really gotten that homesick, and I think it’s because Maddie’s here,” Stephanie Yerigan said. “I have my own little piece of home.”

However, like any sisters they don’t always agree on everything. Sometimes they borrow clothes without permission and sometimes they are associated together instead of as individuals.

Despite these minor downfalls each girl is thrilled to have the other attend UNL and wants to see her sister succeed in sports and in school.