A group of University of Nebraska-Lincoln Iranian Student Organization members chanted this phrase in front of the Nebraska Union on Sept. 28 as part of a peaceful demonstration displaying solidarity for the people of Iran following the death of Mahsa Amini while under the custody of the morality police, a special unit attached to Iran’s law enforcement with a focus on religious principles.

The morality police placed 22-year-old Amini under arrest in Iran for not following hijab guidelines in early September. She died on Sept. 16 under suspicious circumstances. While police cited a heart problem as the issue, hospital records indicated head trauma. Her death ignited a nationwide outcry across Iran.

“People in Iran are killed in the streets for the very simple human right of freedom of choice,” said Kimia Ameri, a UNL graduate student from Iran. “We just want to have one life. We don’t want to live a double life, where we are afraid of what we’re going to wear.”

The demonstrators began the event by standing in silence while news coverage of the Iranian protests blared from speakers. Dozens held signs displaying information, political cartoons and images of Amini. Her name was chanted numerous times by the crowd alongside the slogan “Women. Life. Freedom.” 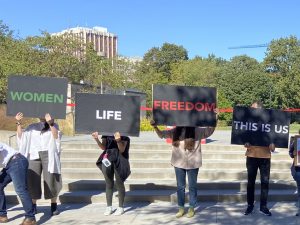 The event followed the Iranian government’s mass shutdown and censorship of the internet. Groups like the Iranian Student Organization have taken it upon themselves to spread information about these struggles because citizens are unable to communicate what is happening internally.

“They have cut down their internet connection just to silence their voice,” ISO alum Seam Salamifar said. “The people don’t have any connection to the free world to show what’s happening there. So, we feel responsible to be their voice to overcome this brutal regime with support from all people across the world.”

According to Ameri, young Iranian girls can be denied access to school if they fail to meet a subjective dress code that can change every day. She said the morality police can assault a woman “because they have a bad night,” and it would go unquestioned.

Ameri emphasized that these laws were enforced on every Iranian woman, regardless of religion.

“It’s not just about the hijab,” Ameri said. “It’s about women in Iran. And we suffer a lot.”

One demonstrator, who wished not to be named for fear of their family members still in Iran facing retribution, cited an incident in which she was placed under arrest by the morality police for not following these guidelines. She was refused any information on her location and was not allowed to contact her family.

“I was so scared because none of my family members knew where I was or what could happen to me,” she said. “The only thing I wanted at that moment was to be free. But this is the way they behave to us.”

According to her, this occurrence of arrest is one most Iranian women must endure.

For Iranian students at UNL, this rally emphasized the necessity for solidarity with their home country. Their message to the community was clear: Iranian citizens need a worldwide voice.

“I know we don’t have a very big community here in Nebraska,” Ameri said. “We stood up with Black Lives Matter. We stood up to the Ukrainian war. As Iranians, we stood up to anything that we feel is wrong. So, we want Nebraska’s people actually supporting us. We want them to be our voice.”

How musicians can use psychology for effective practice