MENUMENU
Home On Campus The Art of Woodblock Printing as shown through Helen Frankenthaler’s “Tales of...
Facebook
Twitter
WhatsApp
Print 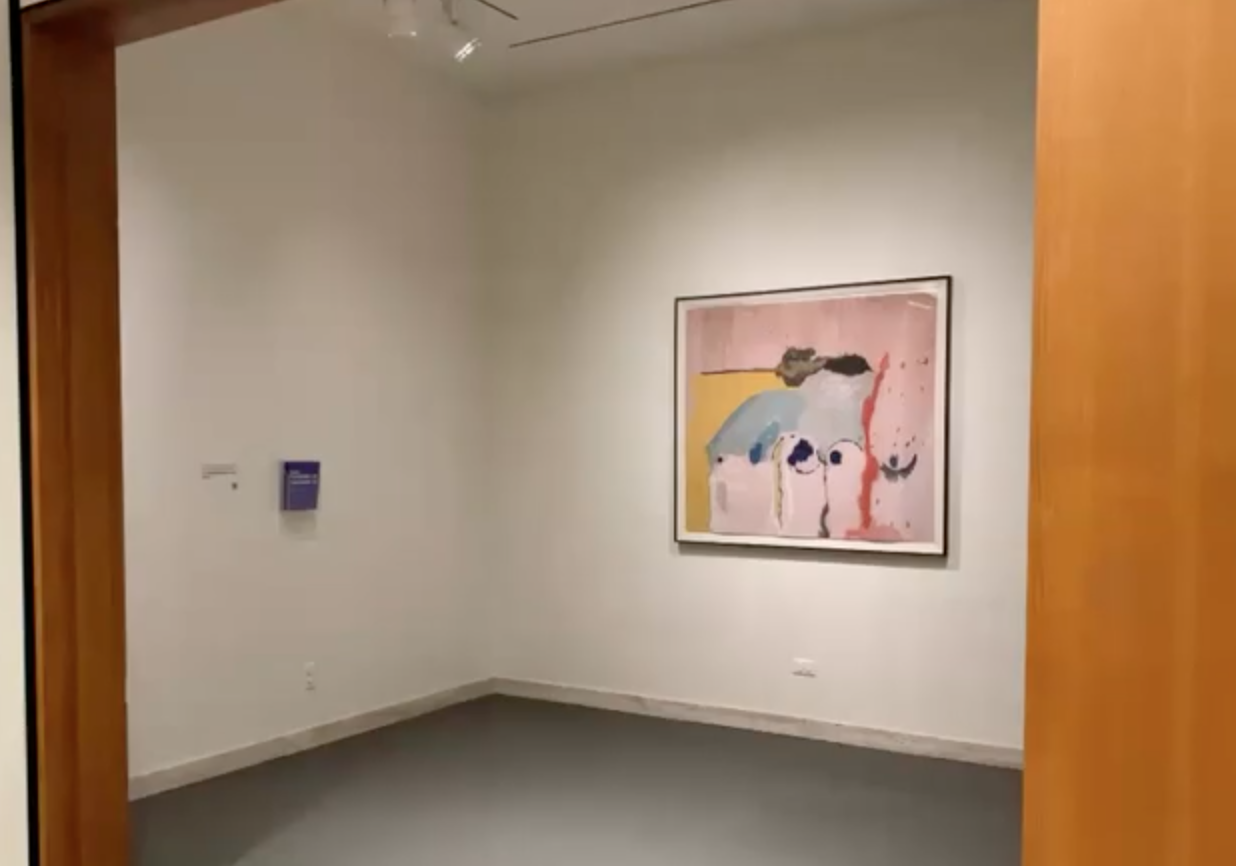 The Sheldon Museum of Art recently acquired a print of the first in a series of six woodblock paintings titled “Tales of Genji” (1998) by abstract expressionist painter Helen Frankenthaler.

This exhibit is inspired by the classic literary work “The Tale of Genji,” and is written by Murasaki Shikibu, a Japanese novelist, poet and lady in waiting on the Imperial court, during the Heian period. It is located in the focus gallery on the second floor of the Sheldon Museum of Art in Lincoln.

With the help of twentieth-century abstract painter and printmaker, Kenneth Tyler, Fankenthaler was able to experiment with printmaking through the recreation of her series, “Tales of Genji,” which was originally done as a plywood painting.

“This print originated as a soak stain painting, where Frankenthaler poured diluted acrylic paints onto a piece of plywood,” said Melissa Yuen, associate curator of exhibitions at the Sheldon Museum of Art. “The printmakers at Tyler Graphics then translated it into a woodblock print.”

In 1976, Frankenthaler began to work within the medium of woodcuts in collaboration with Tyler Graphics. The first piece they created together was “Essence Mulberry” (1977), a woodcut that used eight different colors.

“Helen Frankenthaler was a significant printmaker throughout her career; she made prints in etching and lobography, as well as woodblock,” said Karen Kunc, Cather Professor of Art at the University of Nebraska-Lincoln. “A pivotal work of Helen’s is titled ‘Essence Mulberry’ from 1977; it is a landmark print that was part of the woodblock revival, an innovation that kind of grew out of the 70s and 80s.”

The process of recreating Frankenthaler’s original “Tales of Genji” painting as a print, however, was not easily done. The time it takes to make a print often depends on the complexity of the image and its color scheme. The process can take several months.

“The whole process to make the print was initiated when Helen Frankenthaler made a painting on plywood,” said Erin Hanas, curator of academic engagement at the Sheldon Museum of Art. “She brought that painting on plywood to Tyler Graphics– to these printmakers– and they looked at that painting and then created woodblocks and made a print that replicated the painting.”

The exhibit itself, although only the first in a series of six, is a bold introduction to Frankenthaler’s woodblock artistry, which is an extension of her earlier abstract expressionist paintings.

“The printmakers at Tyler Graphics and Frankenthaler ended up replicating the pooling and layering of acrylic paints that she used in her earlier works,” Yuen said. “You can really see the lovely pooling and staining of the paints– the print itself also really has the wood grain built into it– extending to the edges of the sheet and really soaking into the deckle, as well.”

This technique, called “soak stain,” was one Frankenthaler invented in the 1950s. The technique involved using thinned-down paint to create abstract paintings. Instead of using thick, opaque oil paint, the artist would add paint thinner until it was the consistency of watercolor– which would impact the application of the paint as the art was created.

“Frankenthaler pioneered the soak stain method, and you can actually see another example of a painting that uses soak stain on display at the museum currently,” Yuen said. “ It’s a painting on the first floor in the Perry gallery titled “Red Frame,” which was done by Frankenthaler as well.”

Fankenthaler’s work, although named after the classic 11th century Japanese novel “The Tale of Genji,” does not feature any specific scenes or depictions from the novel itself– but is rather an expressionist series which leaves ample room for viewers’ own interpretations.

“Frankenthaler had her own style of painting– she wasn’t illustrating the novel in the same way that some of the earlier modern Japanese examples were– I think she was more broadly inspired by the novel,” Hanas said. “She wasn’t trying to recreate specific moments necessarily, but was likely inspired by the story and the elements in it.”

In addition to this, even the title of Frankenthaler’s work deviates from the novel it was inspired by. Using the plural “Tales” instead of the singular “Tale,” as employed in the original title, was also a brief topic of discussion, initiated by Ikuho Amano assistant professor of Japanese at the University of Nebraska-Lincoln, Ikuho Amano.

“I would surmise that the plural form of “Tales” is meant to signal Frankenthaler’s visionary response to “The Tale of Genji,” which unpacks the multiple dimensions of the ancient individual and his ephemeral life moments through her intuitive projection of colors,” Amano said.

Despite the deviation Frankenthaler’s painting has from the style exhibited in the Japanese novel it was inspired by, her art has been considered some of the greatest contemporary work in the medium– which can perhaps be attributed to an idea that Frankethaler herself conveyed during a 1994 interview with her printmaker Kenneth Tyler.

“There are no rules,” Frankenthaler famously said. “That is how art is born, how breakthroughs happen. Go against the rules or ignore the rules. That is what invention is about.”