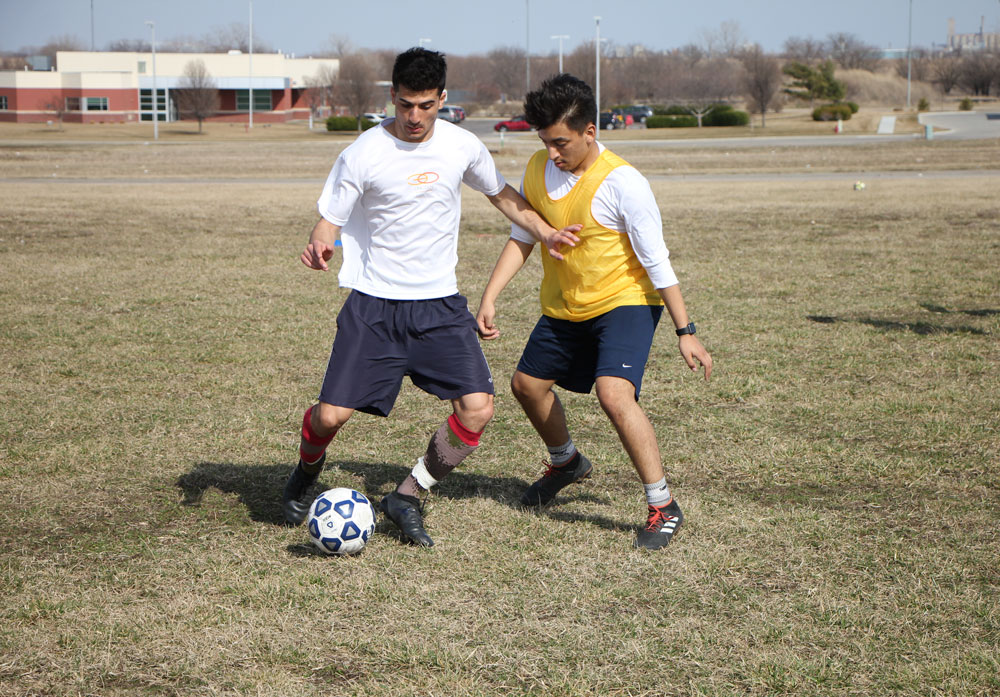 A kid from Vietnam passes the ball to a kid from Iraq who sets up a Sudanese kid for a shot on goal. They call out each other’s names, too, their accents carrying through the windy spring air. Angel calls for Mumtaz, and Ahmad tries to get Jose’s attention.

This is just another day in the life of coach Jason Brunott’s program, which usually features players from seven to 10 different countries. Most of them are refugees or immigrants.

North Star is home to one of the largest populations of foreign-born students in Lincoln Public Schools. Eleven percent of the kids at the school are in the English Language Learner (ELL) program, a number that accounts for 35 percent of LPS high school ELL students.

Soccer is the world’s most popular sport, and many countries are better at it than the United States. That’s apparent by the diversity on the North Star fields.

The players who are immigrants or refugees all have different reasons for coming to the United States. Whatever the cause, they all have two things in common: They were transplanted into a new country far different from their own, and they all love soccer.

Brunott said having soccer as common ground helps reconcile whatever cultural differences or life challenges the players might have.

“No matter what background they come from, they’re going to play for each other because they’re representing North Star,” he said. “I think that’s what’s special about these guys year in and year out. They’re playing for our community.”

There are obstacles to getting such a diverse group to work together. The style of play in the players’ home countries varies, and a lot of parents give their kids different coaching at home than what Brunott gives them.

Brunott said this group of guys is very high-character and they work hard. There are no issues with chemistry or personalities, problems that have surfaced with past teams. Still, the results haven’t translated onto the field. North Star sits at an 0-5 record.

The Navigators went 12-6 a season ago and qualified for the state tournament, but most of the key players from that squad either graduated or transferred to different schools. That leaves a group who has played mostly junior varsity before this season to pick up the pieces, and it’s showing.

One player in particular doesn’t seem happy about the slow start to the season.

Mumtaz Blaseeni, a senior, stands out as the vocal leader at practice. He constantly shouts instructions and isn’t afraid to call out his teammates when a drill breaks down. It’s easy to see he’s tired of losing.

Blaseeni stands out physically, too. He’s one of the more stronger and well-built players on the team. Muscles bulge from his calves as he runs through practice.

The Yazidi said he’s been playing soccer since he was four or five years old, a playing journey that started in his home country of Iraq. His family moved to the United States in 2014 amid the chaos of Islamic State, and the kid who didn’t know a word of English had to start from scratch.

Despite having to make such a big adjustment right before starting high school, Blaseeni said he picked up the language quickly. He was fluent in three years.

“It was hard in the beginning, but if you like something and you want to learn so badly, you learn so quickly,” he said. “That’s how I am.”

American culture took awhile to pick up on, though. He said he was used to being able to be very friendly with acquaintances and slap them on the shoulders. Not everyone he met was used to his overt friendliness.

But soccer provided a connecting point with other kids who, despite being from different countries and cultures, had faced similar challenges of starting a new life in America.

“It’s not hard, because they already know that same thing,” Blaseeni said.

He laughed as he shared stories of post-game celebrations from last year. After a long win streak, they piled into a car, and Blaseeni blasted his Kurdish music, the lyrics of which no one on the team seemed to understood. But they all loved it and had an impromptu dance party.

Blaseeni plans to go to college and study in a health-related field. He wants to play college soccer somewhere if he gets the chance.

Another player on the team attacks the game differently than Mumtaz. Usama Ismail, a tall, lanky midfielder, goes about his business quietly and gracefully. The senior, whose family is from Sudan, speaks softly.

Ismail’s family fled their home country, and he was born in Saudi Arabia. He moved to the United States soon after and has grown up immersed in American culture. He has clear vision for his future, one that involves helping his home country of Sudan.

Once he graduates from North Star, Ismail is headed to the University of Nebraska-Lincoln to study computer science. He wants to get a career that will help him make a difference back home, where some of his family still lives. He visits Sudan every few years.

Ismail started playing soccer at age seven, but he said he’s prepared to hang up his cleats once his senior season is over. He calls it realistic thinking, saying he just doesn’t see himself as good enough to play at the next level.

That isn’t to say he doesn’t value the community of his teammates.

“A lot of us are friends outside of soccer, but a lot of us are in different grades, so we’re not around each other as much with different lunches and stuff,” Ismail said. “But when soccer season comes, we’re like brothers.”

One way Brunott said the team honors the heritage of it players is by letting them hang the flags of their home countries behind the bench before each game. But once the game starts, everything happens in the universal language of competition.

The coach said the life stories of some of his players teach him as much as he teaches them.

“Some of these guys, it’s not just soccer as a sport, but as their passion, their life,” Brunott said. “That’s what they had back home. Some of them didn’t even have school because they couldn’t go to school because it was unsafe. So they’d figure out how to play pickup games on dirt or wherever they were.”

New heights in the Great Plains: A look at Lincoln’s first bouldering gym

One year after graduation, Floersch trying to make name for himself in Nashville