About 28 people in the United States die in drunk-driving crashes every day — that’s one person every 52 minutes. However, Nebraska’s cities have seen a steady decline in DUI rates since rideshare services like Uber and Lyft have entered the market.

Uber is a rideshare service that allows users to order a driver via an app on their phones at any hour of the day, similar to a taxi. Studies are showing that this service, which launched in 2014, is saving lives from drunk driving.

Before Uber and other popular rideshare apps, like Lyft, were launched, people who were consuming alcohol had fewer options when it came to finding a safe ride home. Most relied on a designated sober driver or taxis. Michael Muff, Sergeant of Traffic Enforcement in Lincoln at the Lincoln Police Department, said that taxis weren’t ever popular in Lincoln.

“In a town our size, taxis weren’t always available,” Muff said. “People would have to wait a long time, but now with Uber, it’s pretty quick. It gets people home. If people are waiting for a taxi and then half an hour later, they may get a little drunker and think “Oh, I can drive, I’ll be fine.’” 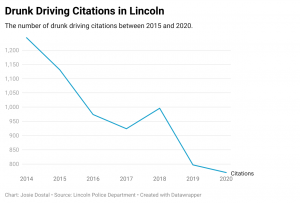 Although there may be multiple factors contributing to the declining rates, Muff said that Uber has been a positive addition to the city over the years in helping stop DUIs.

“When I’ve worked the streets and worked nights, I know that I’ve seen more people using Uber. Even just talking with people, it sounds like it helps them get home easier,” Muff said.

The Journal of American Medical Association published a study by the University of Texas Health Science Center at Houston that shows just how much of an impact rideshare services have had on drunk driving.

The study, Association of Rideshare Use With Alcohol-Associated Motor Vehicle Crash Trauma, concluded introducing rideshare services, like Uber, to cities is associated with a significant decrease in DUI convictions. The study analyzed hospital and DUI conviction data in Houston, Texas between 2007 and 2019.

Not only is this declining trend happening in major cities like Houston, but the effects of Uber can also be seen in Lincoln and Omaha.

The UThealth study also found that age groups under 30 have had the largest drop in DUI convictions and motor vehicle-associated trauma with a reduced rate of 39%. After Uber was introduced in Houston, motor vehicle collision traumas decreased by 23.8% on Friday and Saturday nights for all ages, and 38.9% for individuals under 30 years old.

According to the Global Web Index, the majority of Uber users are aged 16-34. Morgan Seybold, a senior at the University of Nebraska-Lincoln from Omaha, Neb., said that she relies on Uber to get home on the weekends.

“My roommates and I always Uber when we go out on the weekends,” Seybold said. It’s just easy to order it on the app and know that we’ll be able to go home any time that we need to.”

Uber has been consistently growing over the years and currently has 118 million users. 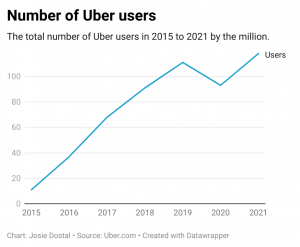 Muff said one of the downsides of having Uber in Lincoln is that cars have started stopping in the street to pick up passengers.

“When they stop in the road, they can back up traffic, and then people coming down the street don’t expect someone to be stopped, so then accidents can start to happen,” Muff said.

Muff said other factors that may contribute to the lowering DUI rates include fewer police officers entering the workforce and fewer people traveling during COVID-19.

New heights in the Great Plains: A look at Lincoln’s first bouldering gym

One year after graduation, Floersch trying to make name for himself in Nashville