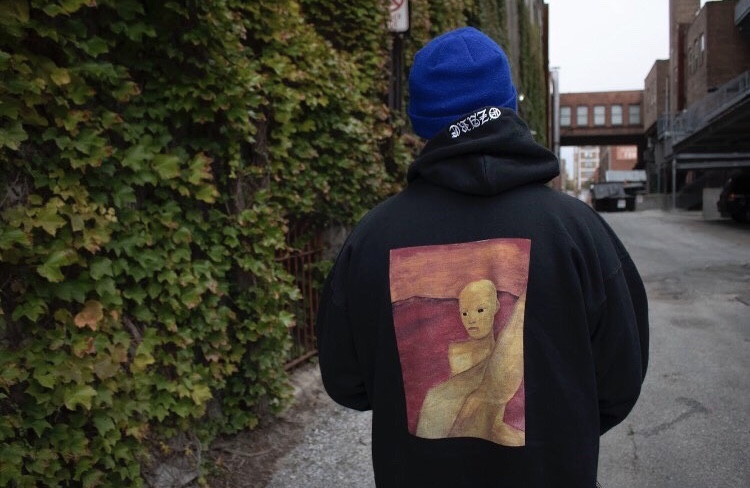 Streetwear is a distinctive style of modern fashion. Throughout the late 70s, this style emerged from punk, hip-hop and surf culture in California.

Throughout the decades, this subculture of independent do-it-yourself brands that started in the 70s has transformed into an entire global market with a cult following. Today, luxury brands and pop-culture have influenced streetwear culture but much of its exclusive do-it-yourself nature remains.

But what exactly is streetwear? Although streetwear is a fluid genre of clothing, design-wise it’s built around baseball caps, sneakers, hoodies, and t-shirts. But the streetwear market is far more complex than random logos printed on t-shirts.

“Streetwear is a culture, not just a product,” says artist Diego Erazo-Reyna, founder of streetwear clothing brand OZARE in Omaha.

Reyna is part of a wave of young artists who have started their own brand following the same do-it-yourself approach that characterized streetwear in the very beginning. He is currently a senior at the University of Nebraska at Omaha studying graphic design and is the creative mind behind OZARE.

OZARE started as a hobby in 2015. After four years in the game, he’s discovered that his brand is a fantastic way to be creative, make money, learn about business, develop new skills and make connections.

On a typical weekend, you’ll find a young man locked in his basement brainstorming, designing, marketing, shipping-off orders or planning his brand’s next pop-up show.

But what exactly does it take to hop onto the streetwear wagon and start a brand?

Starting a brand is not what every beginner thinks, Reyna says. Yes, you need to spend a considerable amount of time working on the smaller details like designing and marketing but there’s much more to it if you hope for success.

The most important thing about starting a brand is actually creating the brand itself, says Reyna. A brand isn’t just a logo. A brand is a culture that embodies its followers.

It’s a process you need to approach just right in order for it to work.

Reyna was born and raised in South Omaha and he wanted to pay homage to its rich culture that has shaped him and his art. Before coming up with OZARE, Reyna dedicated much of his time developing his brand that would represent just that.

That’s what sets apart successful brands from the brands that enter and disappear the market within the same year, says Reyna.

“I’ve seen so many brands—some of my friend’s brands even—die out so fast. I started my brand when I was just a Junior in high school. It’s crazy that I’m still doing this years later.”

Unlike fast fashion brands, OZARE does not follow the standard supply and demand curve. In a standard market, the more people demand something, the more it is produced.

Streetwear fanatics thrive on the concept that the products they are consuming are very limited so it fixes supply and ignores the demand. By following this marketing strategy, Reyna is able to create higher quality custom products.

In terms of the creative side of owning a brand, Reyna says his clothing line is mainly inspired by his travels and photography, but anything can be a source of inspiration.

Like any other artist, however, Reyna has idols that have made an impact on his craft.

Managing his business wasn’t always easy. After years of going through the trials and tribulations of starting a brand from zero, he’s discovered that creativity and business do not always mix.

OZARE values being eclectic and inclusive. Every season, Reyna strives to release a new line of clothes that follow those values but there are times of money scarcity, creative blocks and sometimes—life just gets in the way.

“I’d always get asked when I was going to release new things,” He says. “At one point it took me an entire year to release something.”

Although it may not seem like it to the public, during these pauses Reyna is still working.

While starting this journey with his brand,Reyna admits it was hard to sustain financially. The creation of a streetwear clothing line is not free, but sometimes people didn’t take that into account. Although he had supporters from the start, there were always people who tried to take advantage of their relationship with Reyna.

Although he faces challenges, his passion and desire to connect with others through streetwear motivates him to continue. The support he receives from his followers, friends, and family also keeps him going.

Upon graduation, his goal is to pursue OZARE full-force.. He plans on expanding his one-man-business into something bigger.

For those wanting to dip their toe into creating their own streetwear brand, Reyna has one tip.

“Remember why you started and truly be passionate.” He says.