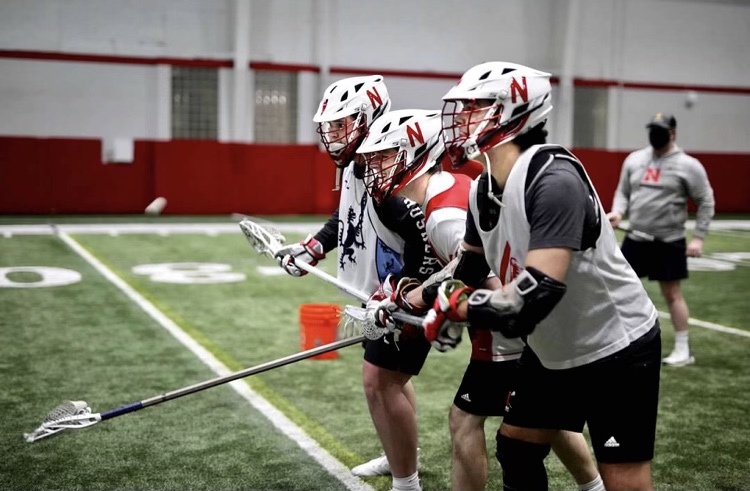 In Sept. 2021, Tim Schartz, president of the University of Nebraska-Lincoln’s men’s lacrosse club sustained a concussion that ended his lacrosse-playing career. But, this has not prevented him from being involved with the team.

As the club president, he has his hand in everything regarding the club’s functionality, and because it is a registered student organization (RSO), it is entirely student-run.

Schartz was initially supposed to take on the role of president his sophomore year, but because of restrictions from the Covid-19 pandemic, the lacrosse club took a hiatus and postponed playing until the following year.

The team resumed play this season, meaning the now senior Schartz could finally assume the position of president.

With the combination of having played lacrosse since the fourth grade and his undergraduate degree in accounting, he was ready to take on the role.

From El Segundo, California, Schartz didn’t want his passion for lacrosse to wither when he went to Nebraska. So, he joined the men’s lacrosse club and has been an active member of the club for all four years of his college career.

Schartz said he appreciated the most recent president, Jimmy Moran–now the current defensive coach for the club–for being organized and teaching him the essential information.

“It wasn’t too difficult [to train him] as he was kinda my No. 2 guy when I ran the club,” Moran said. “I wish I showed him more of how to handle his [executive] board. Running the club takes a lot of work and when a board member slacks off it can really impact the club.”

Schartz said he is also trying to improve the transition from one president to the next. While he knew enough to understand the team’s framework, there was a lot more depth that he had to learn along the way.

Even the basic knowledge is still complicated. Scheduling, contacting, incentivizing opposing teams to play against them, orchestrating the travel, and being recognized as a club by the university is only the beginning of his responsibilities.

“It’s like this whole laundry list of things,” Schartz said. “In the beginning, it was stressful because of the time crunch. The game is set, you gotta play, and you have to have university approval. This is why he wants to write a how-to guide on the roles and responsibilities of the president.

“With the University, there’s so many policies, and every policy has another policy within it,” Schartz said.

These are all surface level to Schartz; there are many levels to something as basic as traveling. In addition to the goals he wants to achieve as president, Schartz is training another player, Braden Grinstaff, to assume the position next season.

“Tim has been great at showing me the behind-the-scenes work that goes into running the program, including me in meetings with officials, directors, and other teams just trying to help the process of transitioning this team over to me next year potentially,” Grindstaff said.

Schartz said he regrets not taking a more interactive approach with Grindstaff’s training instead of delegating tasks that ultimately fall back on him as the current president.

As an accounting major, Schartz admits that he often finds himself treating the club too much like a business. For him, the hardest part of being the president is the management of the team and the relationships of the players.

“The most difficult part would be to hear people out, and not just think of it in terms of money or university policy,” Schartz said. “I was more worried about the bank account and trying to budget everything. But you know, there’s a whole gameplay aspect to it.”

He also believes that the strictly business mindset comes from not being able to play and compete with his teammates.

In addition to the presidency, he acts as an assistant coach, focusing on the game’s more technical and nitpicky rules.

He watches the field to ensure there are always 10 players on the field, no instances of offsides, and other small rules that are easy to miss.

“I’m more under control now that I’m not playing, but I yell at the refs because I question them all the time,” Schartz said. “I’m not even in the game anymore, and I’m still getting so into it.”

Playing the game of lacrosse for so long has allowed him to appreciate it however he can.

This is Schartz’s last season playing lacrosse and as expected, he is sad about not competing.

“I love to compete and win,” Schartz said. “I like to have the emotion of feeling something like that.”

Not being able to play with his team will not hinder his involvement with the club whatsoever. Schartz said he plans to focus on the goals he wants to achieve as president before he has to pass on the title.

The team still has four more games to look forward to, then onto the championship stretch.