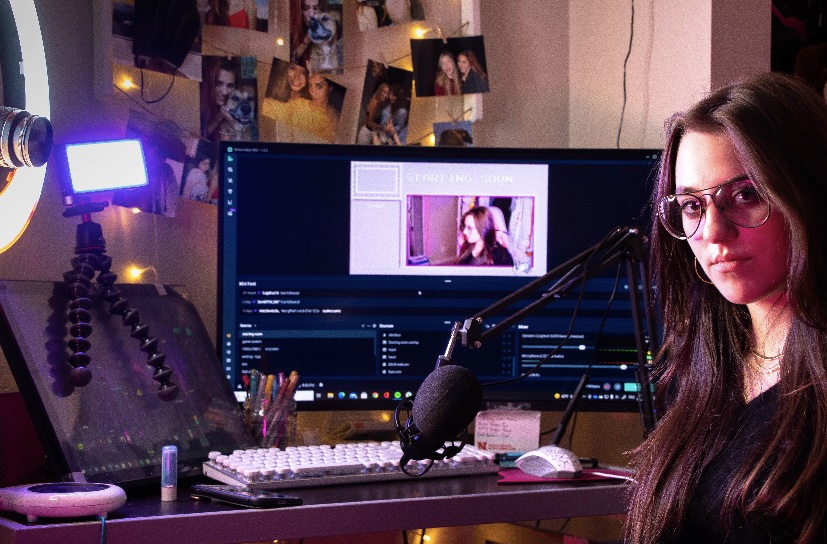 For Morgan Pruitt, there’s an excitement that comes as an esports announcer. And for her, it’s a fit, thanks to her energy and love for announcing.

“The esports landscape is changing day by day,” Pruitt said. “The outreach that goes into finding people to compete is becoming more important each tournament and announcing during the streams is a challenge but tons of fun.”

Pruitt is a University of Nebraska-Lincoln (UNL) graduate who is currently an esports announcer. She said she could not have gotten to this point in her career if it wasn’t for her past. Gaming has been an important part of her life and two of the most important parts of her day deal with gaming.

Pruitt received her bachelor’s degree in Journalism in December. This not only helped her get a job in the field, but helped her continue side hobby as well. Pruitt is currently a streamer on the platform Twitch, and an esports announcer for Brag House, a premiere esports platform for casual college gamers.

Esports is organized competitive video gaming and is becoming a hot commodity. It usually involves two teams that compete against each other in tournament style for a prize.

Pruitt helps with most positions at Brag House, including production work, commentating, and social media.

She said her favorite position at Brag House is announcing.

“I have always enjoyed announcing and I enjoy what I do.” Pruitt said, “ I think that the Journalism college helped prepare me for this position. I took a number of classes that refined my skills while I was in college.”

Pruitt typically announces games of Super Smash Bros Ultimate and Rocket League but there are many games in the future that she will commentate on.

For Pruitt, there are many pre-game activities that have to be finished before the games begin. First, she researches the game that she will be commentating on. Pruitt said this is an important step in the process. She wants to be aware of the gameplay details and the slang that is used in that game’s community.

“The research that goes into a game is one of the most important parts of being a commentator,” Esports commentator Gabe Hinrichs said. “You need to know what is going on during the game to give the audience what they need.”

Pruitt also plays the game with one of her friends to better understand it. One of her friends who has helped her in the past is Tarek Lawson, who helped prepare Pruitt for the Super Smash Bros. tournament that was held last semester.

“She wanted to learn advanced terms for Super Smash Bros. for the esports stream,” Lawson said. “I stream my gameplay for her and go over some advanced terms and different characters’ strengths and weaknesses.”

The streaming of esports itself requires a handful of tasks including commentators, announcers, and camera operators. This is a team effort that needs everyone to help out and do their part to succeed.

Pruitt is usually a commentator. She is not just announcing the game but is elaborating on different topics before, after and during streams to give different insights to the listeners.

Following the stream, Pruitt’s job does not end there.

There is a critique given by co-workers of the work that she has done that tells her the strengths and weaknesses of her performance. This is an honest review that helps in the long run and gives insight on what this person can do better.

Not only is Pruitt an Esports announcer, but she is also a Twitch streamer.

“There are many benefits to streaming,” Pruitt said. “Streaming is a great way to sharpen my skills and network.”

Pruitt has played video games since she was 5 years old and has played many games including Animal Crossing, Alice: Madness Returns, Mario Kart, and Super Smash games.

Streaming has become an important part of gaming. There are many platforms that have streaming capabilities. One of the most famous is Twitch.

Pruitt has streamed on Twitch for more than one year. On Twitch the user base is 65% male and 35% female. Those numbers will not define what kind of a streamer someone is due to their gender.

After being asked if there will be a more equal ratio in the future Pruit had some answers.

“Maybe not in my lifetime, but hopefully in the future,” Pruitt said. “There needs to be more equality in the esports industry, but I’m excited to be a part of it and will continue streaming and announcing.”

As technology has changed, so has her streaming setup.

Pruitt has created a gaming setup that fits her needs. The theme is rabbits in a nod to her own pet rabbit, Alice. Due to her first game that she ever played on stream which was Alice: Madness Returns.

Pruitt said that she likes to follow a schedule of games on Tuesday and Thursdays evenings. For these streams you can expect games played such as Resident Evil, Minecraft, Alice: Madness Returns, ect.

One of Pruitt’s moderators, Nick Nylin, has been a moderator since her channel started about a year ago. A moderator is a key part of a person’s stream that does jobs such as work on discord page, make sure that the chat is clean, and makes sure that the stream is running smoothly.

Like esports Pruitt has to be live which takes a lot of confidence and skill. She and her mods  make sure that she is ready to start the stream by testing sound and video quality before viewers see the stream.

Then the stream starts.

You can gain followers from playing certain games but personality is the main attraction to why people watch certain streamers. Pruitt attempts to make her streams as entertaining as possible.

This past year, Pruitt obtained a soundboard that includes many sounds that make the stream more entertaining. There are many different aesthetics included on the stream including a popup when somebody subscribes to her account.

These little additions matter when it comes to gaining a following.

Even though Pruitt is playing a game, said she makes sure to read the  chat and responds in some way. A streamer who is close to their audience makes it more personal for the viewer.

To end the stream she thanks everyone for attending.

“Video games have been a part of my life for years,” Pruitt said. “I might as well stream what games I am playing to try and entertain others.”