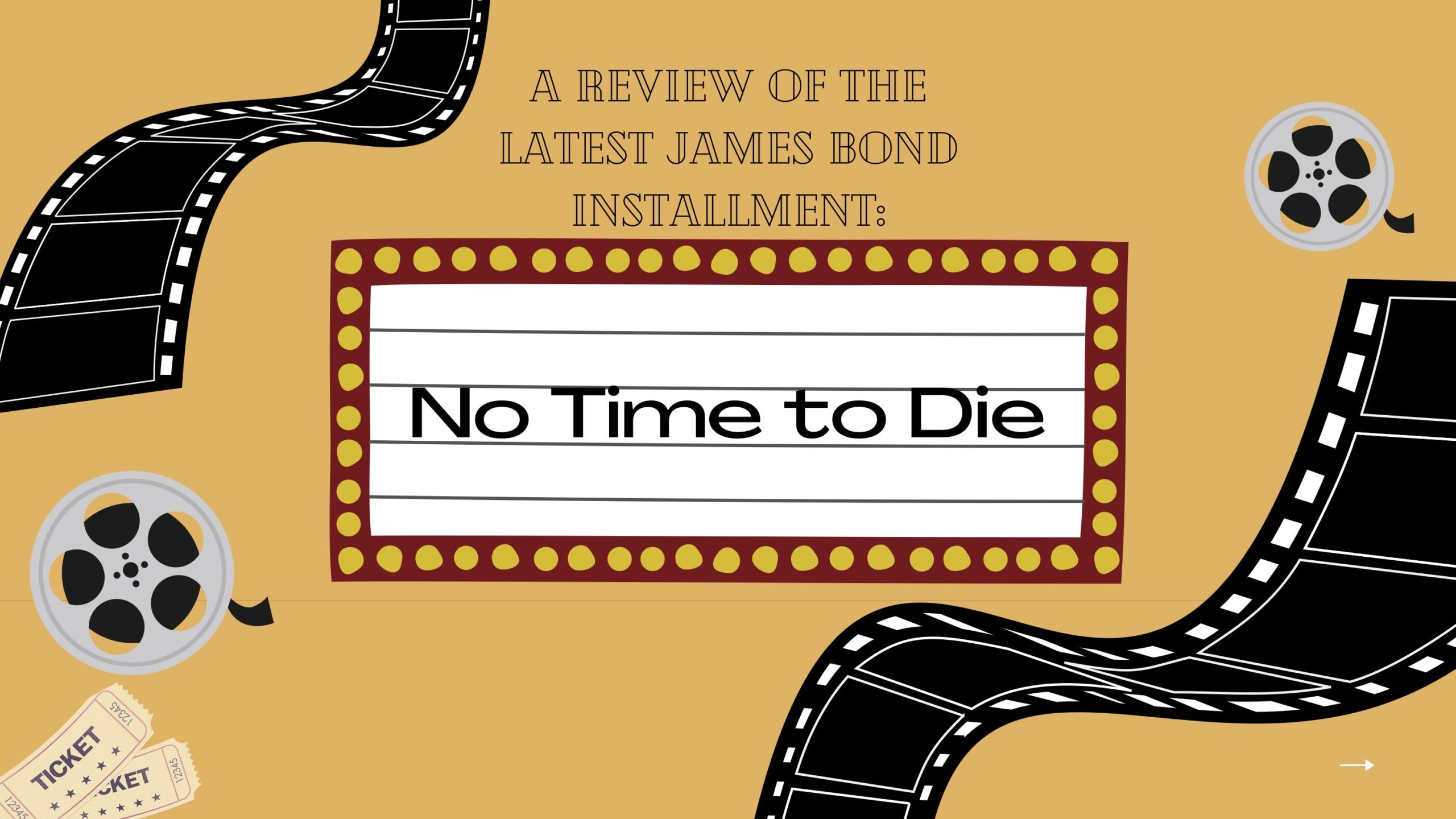 Since 1962, the character James Bond has appeared in 25 adventures on the big screen, with “No Time to Die” being the latest. Bond has been portrayed by multiple actors ranging from Sean Connery to Daniel Craig.

“No Time to Die” is Daniel Craig’s final film as Bond, and this movie serves as the big finale to his series of movies, tying up loose ends. The film went through a series of production issues, from switching directors to its release date being delayed repeatedly due to the COVID-19 pandemic. The film was released in the United States on Oct. 8, 2021.

The plot picks up where 2015’s “Spectre” left off. Bond is now retired and living in Jamaica. He is approached by his friend Felix Leiter, a CIA agent who needs Bond’s help with a new mission, thus dragging Bond out of retirement.

Going into this movie, I was expecting the film’s quality to be akin to that of “Quantum of Solace,” Daniel Craig’s second Bond film, which was also plagued with production issues including a writer’s strike. However, I was pleasantly surprised.

“No Time to Die” serves as a great send-off to Craig as Bond, with lots of great callbacks to previous films as well as more character development. One of my favorite aspects of this film was how much Bond is humanized. In past Bond films, especially those with Connery and Roger Moore, Bond is characterized as a superhero who can do no wrong. With Craig playing the role of Bond, the writers have tried to ground Bond and bring him to our level. “No Time to Die” puts this concept to the forefront, highlighting his relationships with Madeleine Swann and Felix Leiter.

Speaking of characters, “No Time to Die” brings back all the greats while introducing some interesting new ones. Characters like Madeleine Swann, M, Q, Moneypenny, Felix Leiter and Ernst Stavro Blofeld are all played well by their respective actors and actresses. New characters included Ana de Armas’s Paloma, Lashana Lynch’s Nomi and Rami Malek’s Safin.

Nomi is an MI6 agent who became the new 007 after James Bond left service. When Bond comes back, this leads to a somewhat friendly rivalry with lots of banter, but you can tell there’s a good sense of respect between them.

Safin is the main villain in this film. The character of Safin himself is passable, albeit a little bland, but Malek’s performance is what saves the character from being completely unmemorable. His performance is quite intimidating and sometimes even creepy. But, Safin pales in comparison to past villains of the Craig films, as his motives constantly switch and there doesn’t seem to be any real reason behind them.

In terms of the action set pieces, “No Time to Die” delivers. The film’s cold open in Italy, the shootout in Cuba and the climactic battle at Safin’s island are all highlights. These great scenes are partly due to the direction of Cary Joji Fukunaga. Fukunaga adds life and color into these scenes and they are extremely visually appealing. This is in contrast to Sam Mendes’s work in “Spectre,” with many shots looking dark, murky and relatively bland.

Even with issues regarding the plot and villain, “No Time to Die” is a fantastic final entry for Daniel Craig. It’s unfortunate that this is his final one, but this served as a great and well-deserved sendoff for the character.

“No Time to Die” is playing in theaters all across Nebraska.

Opinion: Who should be Nebraska’s next governor?

Opinion: The Five Things You Should Know about the Green New Deal