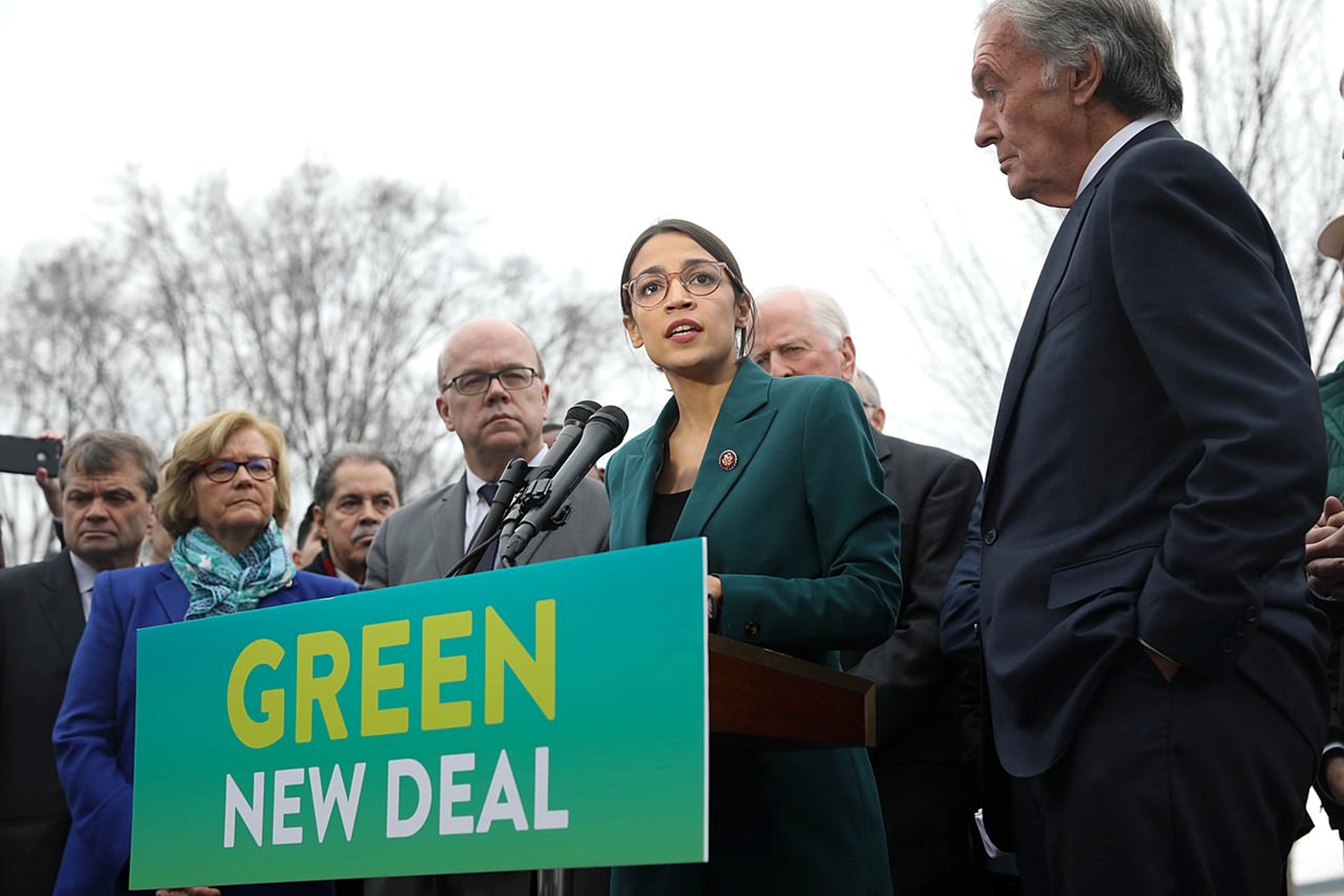 And a brief aside about why many of us may not know them yet.

The Green New Deal (GND) is quite possibly the most buzz-worthy piece of legislation in 2019, and with its sweeping aspirations and the support of liberal firebrand Alexandria Ocasio-Cortez, it’s easy to understand why it gets so much media attention and elicits such heated responses from across the isle.

However, legislation can be complicated, and often competing narratives about it can confuse what’s actually at stake.

So, what is it? And what are the implications for the country? There are five key things to know.

What it is and what it isn’t. The Green New Deal’s is House Resolution 109, a 14-page document penned by an environmental think tank that asks Congress to formally recognize the problems of climate change and to agree upon a set of promises to the American people about future climate change legislation.

It’s not a full bill. It’s not really even a fully formed policy. It’s an admission of the problems before us and a list of aspirations and goals about how to combat climate change. It’s a framework, and a starting point for a broader debate. It’s not gospel.

It comes in two distinct halves. The first half covers the challenges that the nation faces due to the changing climate, frequently referencing the IPCC’s recent report on Climate Change and other evidence on the scope of the problem. The resolution claims that without action now, the nation could lose over $500 billion in economic output before the end of the century, and 350 million people could be exposed to “deadly heat stress” by 2050.

The second half covers what Congress should do about it and the goals it hopes to set. This iteration of the bill doesn’t mandate any action. The bill’s proponents hope that comes in the future. This bill simply lays out priorities and sets the stage for a full GND.

The GND is incredibly bold. One point of relative consensus is that the GND is a BIG FREAKING DEAL. The aforementioned second half of the bill calls for total decarbonization of the United States by 2050. That means zero coal and natural gas power plants, zero fossil fuel burning cars and a drastic reduction in the production of red meat.

The GND isn’t shy about the fact that it’s a condemnation of the lack of U.S. response to a rapidly-changing climate, and it simultaneously promises to be a total overhaul of the U.S. economy. It calls for retraining and continued education of workers in affected industries. These sections are perhaps the skimpiest on details, leaving considerable uncertainty about how it would be implemented.

The bottom line is this: The authors of the GND know there’s a cost to decarbonization, and they want to mitigate that cost … somehow.

It contains a laundry list of promises to all sorts of folks. The GND will have negative repercussions for large swaths of the public that work in industries that contribute to our carbon footprint. At the same time, the resolution looks to protect groups that have historically suffered because of climate change and economic disparity, which includes, as listed in the resolution, “indigenous peoples, communities of color, migrant communities, deindustrialized communities, depopulated rural communities, the poor, low-income workers, women, the elderly, the unhoused, people with disabilities and youth.”

That’s an awful lot of people, and it promises all Americans quite a bit of protection as well.

The reception on Capitol Hill has been mixed. Democratic leadership is not all that fond of the bill, and many Republicans have latched on to the resolution’s more radical calls, seeking an opportunity to score points with their base.

Some polling points to the idea that the public is broadly in favor of congressional movement on climate, but until more concrete narratives develop, it will be difficult to tell what exactly public reception will be.

One thing is for sure: The devil lies in the details. Obamacare, a recent piece of flagship legislation, contained thousands of pages of regulation in total by the time it was passed and implemented. We have the GND’s first 14.

There’s a whole bunch more this piece can’t cover. We’ll track it throughout the summer, but there’s plenty of great coverage from other sources. The resolution itself is a good place to start, and Vox’s coverage of the GND can shed some light on the issue, including its YouTube explainer and David Roberts’ piece about it, here. The GND covers all sorts of corners like small family farms and infrastructure deals, but these should become more clear as discussion around it continues in Congress and the 2020 Democratic primary.

One last thing. There are plenty of reasons that the conversation around the GND has been tenuous. It’s a major piece of legislation, and there is a large amount of misinformation circulating about it. However and perhaps most importantly, media coverage has been confusing. Many sources have covered what people think about the bill, and whether or not it can pass, but stories on the content and substance of the bill have been few and far between. This could be the centerpiece of the 2020 election and possibly the flagship of an upcoming administration. It could also be a political football that both parties struggle to define while no genuine progress is made. The conversation that America has surrounding this issue and this resolution could shape the future of the economy and the future of the globe. It matters how we discuss it. Journalists have a responsibility to inform the public well, and the public, too, is responsible for being well-informed.

Opinion: Who should be Nebraska’s next governor?

James Bond’s spectacular return in “No Time to Die”