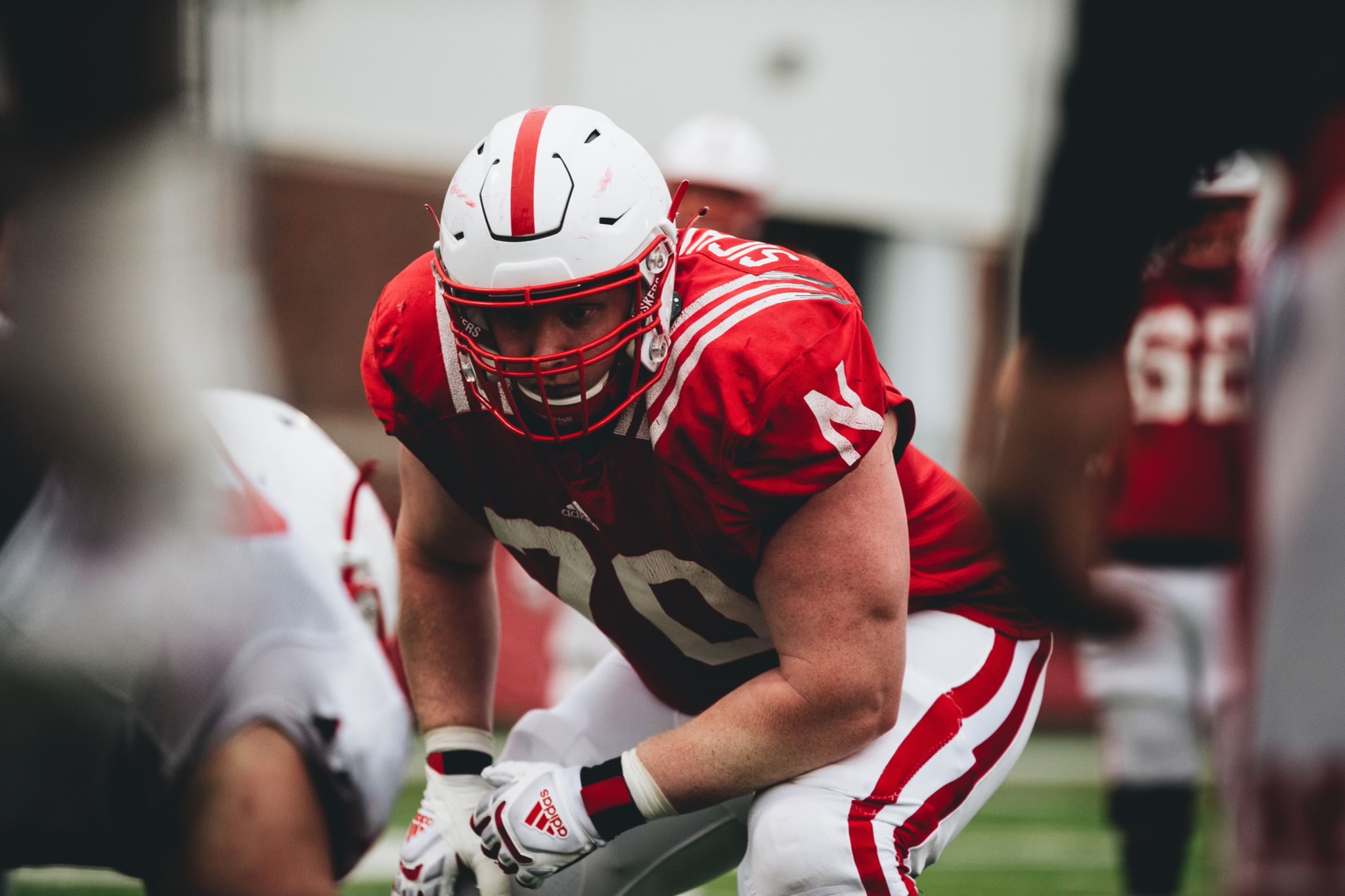 The 6-foot-4, 315-pound lineman stares at the four-pound, 15-inch laptop screen’s lines and lines of text. To most people, these cryptic lines look like nothing but chaos — a jumble of words, numbers and symbols randomly thrown together.

But to junior software engineering major Matt Sichterman, this is code.

After five more minutes, he slams his arms down in frustration.

His body is demanding rest for the punishment endured for the day. He knows that in five hours, he will have to go through that same punishment and he needs time to recover.

His mind is also irritated by the homework assigned last week, which is due in 10 hours. After spending countless hours every night on the assignment, he’s still having problems with his code and does not know where the problem even starts.

But this is exactly where Matt wants to be.

“My dad always told me to pick something hard and be the best at it,” Matt said.

With his father’s advice, Matt picked one of the most challenging and demanding majors at the University of Nebraska-Lincoln: software engineering, all while competing in the grueling sport of Division I football at Nebraska.

Originally from Cincinnati, Ohio, Matt, a triplet, comes from a family of athletes. His father, Mark, played football at Drake University while his mother, Judy, swam at Clemson University. His older brother by a minute, Dan, is plays football at Iowa State University, and his younger sister, Megan, swims at the University of Tennessee. He also has two older sisters, Claire, who played basketball and soccer in high school, and Lauren, who swam at the University of Miami of Ohio.

The Sichtermans are all athletes, and they also train in academics.

“It was never really pushed on us, but it was always that expectation,” Matt said. “As I said, excel at everything.”

In high school, with multiple AP classes, he scored a 30 out of 36 on the ACT and earned the Academic All-Ohio Award forr athletes with a 3.5 GPA. Matt graduated with a 4.4 GPA.

Outside of the classroom, the competitiveness between his brother and sister sparked some motivation.

“We would always get our report cards and compare our grades, trying to see who was the best,” Matt said.

The siblings took many AP classes together, and each exam always ended in boasting from one to the other. Every grade they achieved turned into ammunition to claim the title as the smartest triplet.

And that competitiveness wasn’t just between his brother and sister, but his entire family as well.

“My dad beat me in the ACT by one point, and it kind of ticked me off,” Matt said.

On the football field, Matt played multiple positions in high school: right tackle his junior and senior year and tight end prior. He was selected for First-Team All-Southwest District and First-Team All-Tri-State Pick. Combining his academic and football career’s success alongside his community involvement, he was awarded the “That’s My Boy” award by the National Football Foundation. He also won the Anthony Munoz Scholar Lineman of the Year Award for his academic and football achievements.

In high school, 247Sports scouts ranked Matt as a top 20 player in Ohio and one of the top offensive linemen prospects. Matt drew multiple Division I offers and a total of 29 schools, four of which were Ivy League schools, and eight Big Ten schools.

He created a spreadsheet and gathered data on each of the colleges. Ranging from attendance numbers to athletic program rankings, Matt left nothing off the sheets — what each school was like and how he would fit.

The most important thing was whether he could pursue his passion for software engineering, which started in high school and instantly captured his interest.

“It was a lot different than a normal class. There were a lot of hands-on building projects and coding. It was interesting, fun and also challenging,” Matt said.

He fell in love with coding and its challenges and decided to major in software engineering. Pair that with playing Division I football seems like a challenging task for anyone.

But Matt wanted the challenge; he just needed to find the right college to challenge him both athletically and academically.

Through his recruiting process, he made one official visit, and that was to Nebraska.

Dennis Leblanc, Nebraska’s executive associate athletic director for academics, remembers the discussion with the Sichtermans at the time.

“His dad was very interested in Nebraska and asked, ‘Can my son play football at Nebraska and get a degree in engineering?’ And I said, ‘Yes,’” Leblanc said.

This conversation then turned into an interview, where the Sichtermans asked everything they could to see what the University could do for Matt, aware of the time that football and software engineering demanded. They wanted to know if Matt could do both at a high level and how the athletic department would support him.

“I told them that we would do everything to avoid scheduling conflicts with practice and class. And if there were an unavoidable conflict, we would prioritize class,”  Leblanc said.

With five national football championships to its name, Nebraska dominates off the field, too, leading all colleges with 340 Academic All-Americans — the highest — ahead of MIT and Notre Dame.

“Some schools kind of turned off the idea of being an engineering student and playing football. But when I came here and saw the mix of 90,000 strong every week and the academic support, I knew,” Matt said.

Matt stands at the Training Table, looking over the buffets to see his options for breakfast.

In the cold buffet machine is a wide variety of colorful and fresh-cut fruit, parfait served in tall cups and a variety of overnight oats.

Matt wanted something that would fuel him until lunch, but at the same, won’t weigh him down at practice. He goes for a few scoops of watermelon, potatoes and a breakfast sandwich. After that, he stops at the nitro cold brew machine.

The recommended serving size for the nitro cold brew is eight fluid ounces and contains 220 milligrams of caffeine.

Matt, running on five hours of sleep, grabs a 20-ounce cup and pulls on the tap to fill it.

“This is the secret on how I balance football and software engineering,” said Matt.

For most people, 20 ounces of cold brew could be a little excessive, but Matt needs the energy for his morning meeting and practice. After filling the cup to the brim, he walks over to a table for breakfast with other offensive linemen before heading over to their position meetings.

During the season, Matt is obligated to two things: being a full-time student and a full-time athlete. The combination of the two can present its challenges.

“It’s pretty rigorous. The concepts are challenging to learn, and the courses are fairly difficult,” Person said.

Code is not something students can learn through reading; it takes a more hands-on approach to learn how to code software. The assignments rarely ask to recite information but for the students to apply their knowledge to create something.

An example assignment that software engineering students might see is with three different scenarios. They must create a solution that can pass all three scenarios while also passing some software tests.

Also, the students will not have an outline to follow, just the scenarios, so they have to create from scratch their code that can account for each scenario.

And if that isn’t hard enough, there is no real way to see if the software will work until the very end.

Students can use intuition and create breakpoints within their code to occasionally see if the program is functioning. Still, even the most proactive students in this regard are bound to run into frustrating errors with their code.

And if there are errors in their software, the code will never explicitly state where or what the error is. These errors can be caused by a minor flaw that could stop the software from working altogether, such as forgetting a simple backslash.

In this position, students spend more time looking through their code to see where the issue (or issues) occur. It becomes a search for a needle in the haystack.

Every day, he wakes up at 6 a.m. and heads to Memorial Stadium for breakfast before meetings at 7 a.m. After that, he gears up in the locker room and heads to Hawks Championship Center for 8 a.m. practice, which lasts about two hours.

Once practice ends, he grabs some snacks and Gatorade to continue to refuel before going to the weight room to lift at 10 a.m.

At 11 a.m., Matt goes back to the Training Table for lunch and hangs out with his team for about half an hour before heading out for class.

Around 5 p.m., he comes back to Memorial Stadium for either team meetings or another lift, which lasts another hour.

After that, he returns to the Training Table for dinner at 6 p.m. and hangs out for another half hour before going home for the day. He spends an additional 15 hours per week developing software at Hudl as a part-time software engineer.

Matt arrives back at his house after another long day.

After stepping into his room, Matt pulls out his phone and looks at his calendar app.

On the screen, he has his schedule for today. Everything up to 6:45 p.m. is marked as complete. He looks at the endless list of tasks that he needs to complete for tonight: a Zoom meeting with his classmates, software for Hudl and another class assignment.

He puts his phone away and pulls out the MacBook from the bag. He knew that he was going to have another long and hard night.

But this is exactly where Matt wants to be.

The reason for Matt’s success is his careful and meticulous planning. At the beginning of every semester, Matt turns to his calendar and creates a regimented schedule of upcoming assignments and meetings.

But the biggest reason for Matt’s success wasn’t because of his organization, but his passion.

“I’m not surprised about his success because I know that Matt cares a lot about his academics, and he cares a lot about football. It takes a really dedicated individual who really wants all of these things to make it happen because it truly is a lot that he has on his plate,” said Person.

Leblanc said he was always aware that Matt was a “rare guy” who would succeed in whatever he wanted.

“Matt is not a cocky guy. He has this calm sense of confidence,” Leblanc said. “He’s the kind of guy where, if the building was burning down and I was screaming, he’d tell me to relax. He would tell me, ‘I understand how this building is built, and if we go over there, we’re going to be just fine,’ and I would believe it because he’s a smart guy.”

Matt doesn’t have a lot of free time due to football. But when he does, he makes use of every minute.

“In my free time, I’m either catching up on work, which I enjoy doing, or learning something. Watching YouTube, relaxing, keeping that learning train going. I think it’s just my passion to learn,” Matt said. “I enjoy what I do, and that makes each day fulfilling.”