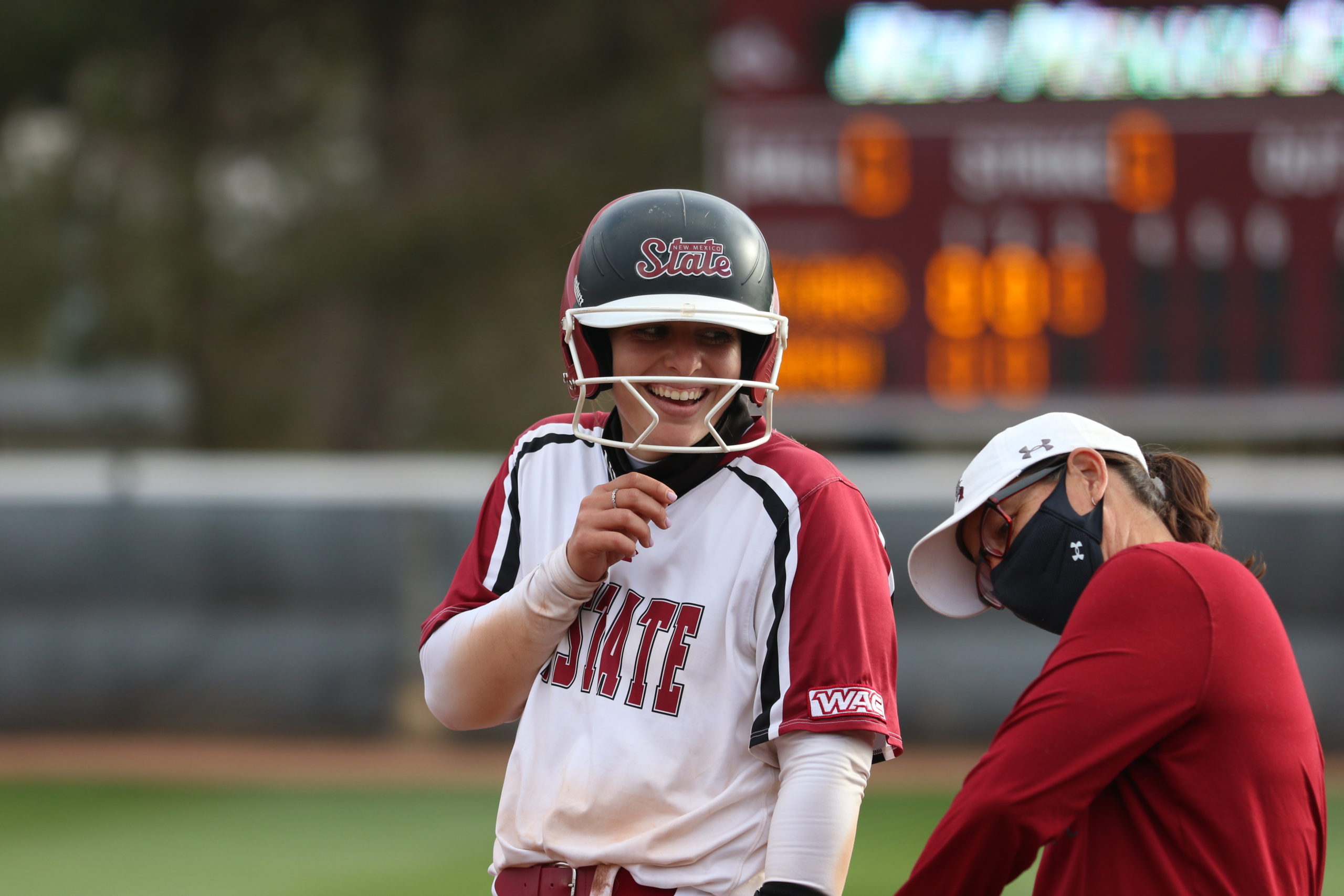 I take a nice hot shower to wake myself up and prepare for the long day ahead. I tuck my crimson NM State polo into my khaki shorts. I put on my prohibited Nike tennis shoes, as NM State is a strict Under Armor school.

Everything was different, but I never once doubted if I made the correct decision.

As an intern, I have direct oversight of the softball team, the women’s soccer team, the track and field teams and the cross country teams. I am responsible for each team’s social media along with keeping up with stats. I write previews, recaps and feature stories that get posted to the official New Mexico State Athletics website.

The short version is that I should know more about each of my teams than anyone else in the world. They call us sports information directors or SIDs for short. Any fact that you hear during a live telecast of a sporting event probably came from someone just like me.

As I prepare for my three-and-a-half-hour trip to Tucson, I check my equipment: camera, two laptops, extra batteries and chargers — all randomly thrown into the black Under Armor backpack. I hop into the black Chevy suburban the school rented for me, and at 6:45 a.m., my work day officially begins.

I cruise along I-10 in the middle of the New Mexican desert on my way to the University of Arizona campus. I stop by a Wendy’s just two blocks north of Rita Hillenbrand Stadium and grab a 10 a.mx. to try to satisfy my hunger until dinner.

I stop at a gas station across from Arizona Stadium, the home of Arizona football. I grab a Monster Energy drink and a couple of waters to get me through the 90-degree day. Two college girls jump in front of me, very much displeased with the lack of choice of alcoholic shooters present on the hot Saturday morning.

I head back over to the newly renovated softball stadium two and a half hours before first pitch. The mammoth press box makes the Hawks Field press box look like a Division II facility. I meet the Arizona sports information director who tells me I will be seated on the concourse under the large overhang that protects three-fourths of the crowd from the Arizona sun. I set up my laptop and take my obligatory video of the stadium to put on the NM State softball Instagram story as well as my own personal Instagram.

As the Aggie softball team makes its way out to the dugout, I head down to our dugout to grab our lineups for our exhibition game against Team Mexico. One of the nicer perks of being on the inside — an SID rather than a reporter — I can pretty much go wherever I want.

I trot across the grandstands back up to my station and post our starting lineup graphic to social media. For the remainder of the afternoon, I ran back and forth from the photo bay, the dugout and my work station sorting and posting some of my photos. Following the first game, I plug the final result into our website and post a final score graphic. After that, I ran down to our dugout to give them box scores and get the lineups for game two against No. 8 Arizona. I head down to the dugout to get some in-game photos (like I said, the perks of being a SID.) The game ended and unfortunately for the Aggies the eighth-ranked Arizona Wildcats got the best of them.

I head back to my workstation to begin my postgame recap. After the softball recap is posted, I begin to write my track and field recap, which finished up action during the final softball game. As I am finishing the track and field recap, I receive a text for my boss asking if I can finish up his baseball recap. I spend another half hour at the stadium before sending the baseball recap out to local media.

By 6:30 p.m., my day at Rita Hillenbrand Stadium is done. I quickly Google to find the closest In-N-Out Burger and drive 10 minutes for my first-ever meal at the iconic fast food restaurant. I spend an hour trying to find an open hotel room. I settled on a Holiday Inn Express and began to sort and edit the hundreds of photos I took throughout the day.

11 p.m. rolls around, and I decide it is time to head to bed. I set the alarm for 5:40 a.m. for a little golf before I make the three-and-a-half-hour drive home. After arriving in Las Cruces at 6 p.m., I make a quick run to the office to do about an hour’s worth of work.

Monday comes along, and at 6:30 a.m. I stumble out of bed for my COVID test. I then spend the rest of my morning compiling game notes for the upcoming WAC Women’s Soccer Tournament.

At 1:30 p.m. I begin packing for a possible weeklong trip to Phoenix, for the conference tournament. The assistant coach, a player and I leave the soccer facility at 4 p.m. for the six-hour trip to Phoenix. On Tuesday morning, I put together a release for our two track athletes awarded WAC Athletes of the Week.

I squeeze in my JOMC 487 JOMC 487 Media, Ethics and Society class before we make the 10-minute drive from our hotel to the 3 p.m. kickoff against the University of Texas Rio Grande Valley Vaqueros (UTRGV). I take some pregame shots of the scene and continue to take in-game shots while live tweeting the match from my laptop that sits right behind the bench.

The Aggies pulled out a 3-0 win for its first WAC Tournament win since 2014. As the team showers, I sit outside the Jerry Colangelo Museum on the campus of Grand Canyon to write my recap. After a team dinner, I spend the remainder of my night going through the photos until 10 p.m.

I repeat the same soccer process on Thursday along with compiling game notes for the upcoming softball series on Wednesday. Unfortunately, the Aggies fell in a penalty kick shootout to the No. 1 seed.

At 8 a.m. on Friday morning, we make the six-hour trip back to Las Cruces. Upon my 3:15 p.m. arrival at the NM State campus, I quickly unload my suitcase from the van. I grab a pair of unwashed khaki shorts to change into before I make the quick trip over to the NM State Softball Complex where I arrived in the third inning of the first game of our doubleheader. I capture the moment of the Aggies’ first no-hitter in a decade.

I get right back to work with photos and live tweeting while making sure all of the stats are correct. Game one ends, and I wrap up the recap. I run box scores down to the coaches, get their lineups and set up scoring for game two all within the 30-minute period.

I spend the rest of my night live tweeting while helping out our student worker with scoring. The game ends, and I repeat the same process as game one. I tracked down our star pitcher who pitched the no-hitter in game one for a little postgame interview. Due to some awful Wi-Fi, I go back to my apartment to write my postgame recap and update our social media graphics.

I am the first one in the press box, common on most game days. Sometimes, I am there before the team.

The maintenance crew works on our field as I set up the game ahead. This includes the scoring software, live stats, posting lineup graphics, inserting lineups into the software and running down some pregame stats to the coaches.

If done correctly, a burden is lifted off of my shoulders. Everything seems to be working. One of the student workers is running the scoreboard. My coworker is running the stats. I run the Twitter account posting highlights, and we dominate the series finale. The game ends, and I do my routine of running stats down to coaches. The Wi-Fi seems to be working today, so I spend the next hour writing my recap and compiling notes.

I leave the press box, and notice that I’m the only one left in the ballpark. Coaches are all gone. Maintenance crew is not there. It’s just me. Then my worst fear came true. The gates were locked. I was locked inside the softball complex.

I looked to my left and right before hopping over the fence with my bag strapped to my back and drove home. Just another week in college athletics.