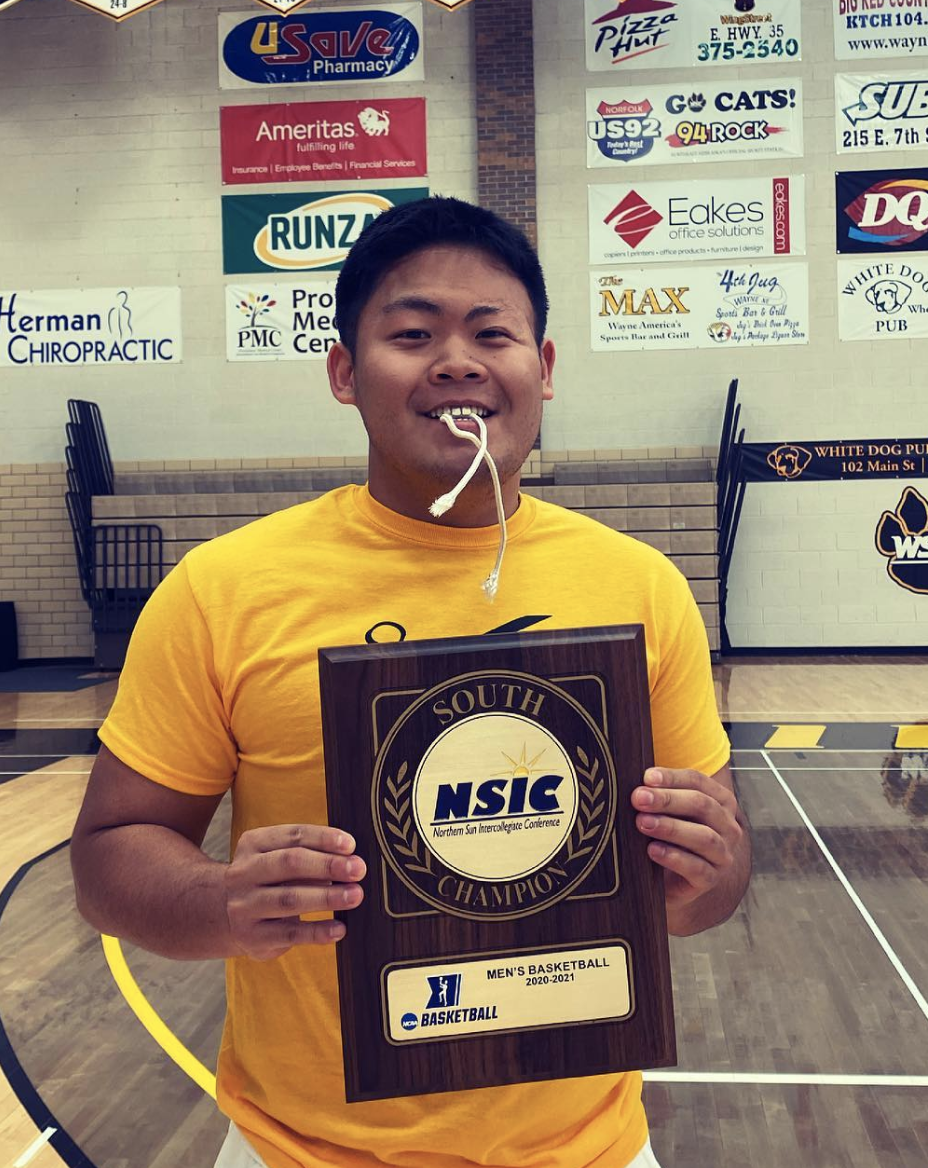 Swimming deep in the sea of red that engulfs Lincoln’s Haymarket District for Nebraska’s football spring game, Creighton basketball stars Alex O’Connell, Rati Andronikashvili and Keyshawn Feazell enjoyed the madness on a day off from the hardwood.

A few proud ‘Jaysker’ fans spotted the inconspicuous Bluejays and asked for pictures, but one interaction with a fan was quite different.

Zach Helms, a South Korea-born 22-year-old who stands just taller than Feazell’s hip, introduced himself to the trio. Feazell flipped the script and asked Helms if he’d be willing to pose for a picture with them.

They were fans of him.

Helms, who grew up in Arlington, Neb., is the creator of the popular Twitter account CreighTakes, where he offers commentary on the Creighton men’s basketball program. The account, which he created a little over a year ago, has helped Helms build a connection with the likes of Feazell, O’Connell, Adronikashvili and many Creighton standouts and coaches.

“The number one reason I made the account was to help the team by reaching out to recruits and telling them why they should come to Creighton,” Helms said. “It just blew up from there.”

Helms’ account has grown to reach over 4,800 followers, and three contributors have joined the team to keep up with the demand for content, Helms said.

“Working with Zach is a one-of-a-kind experience,” CreighTakes manager Brett Renner said. “From his access to sources to his dedication to the Jays fanbase, I’m grateful to be a part of it.”

For those who know and have worked with Helms, the success in the basketball industry comes as no surprise.

“It’s purely the love of the game for me,” Helms said. “I think everything about basketball is so beautiful that I can always find an interest in it off the court.”

When he’s not creating content for CreighTakes, Helms lives out his passion for basketball as a student assistant coach for the Wayne State men’s basketball team and runs an annual two-on-two basketball tournament in his hometown.

Fresh off his high school graduation, Helms reached out to Wayne State head coach Jeff Kaminsky and asked if he was looking for a student manager.

Kaminsky had a different idea for how Helms could help the team.

“I thought, you know, I’m just gonna be the waterboy or blow up balls, but right when I got there, they knew how serious I was about basketball and laid out a plan for how I could work my way up to become an assistant coach,” Helms said.

It’s not often you’ll see a 19-year-old student going on recruiting visits or creating detailed scouting reports, but Helms tried to use his knowledge of the game to separate himself from the norm as an aspiring professional in the basketball industry, he said.

The roots of that knowledge grew from a young boy’s pure wonder.

“I always liked math when I was a kid, and I would watch TV and I always saw games in the hundreds,” Helms said. “I was like, ‘Whoa, that’s a big number,’ so I just started watching basketball ever since then.”

That initial awe for the game has blossomed into countless friendships and memories for Helms.

“When he was little we knew he was crazy about basketball, but I honestly had no idea how big of a role it would play in his life,” Helms’ mother, Julie, said. “Although I know he loves playing, he has found a way to play a huge role in other ways, on the sidelines, off the court, in the stands, and in the community.”

Helms has especially played a large part in bringing high level basketball to his community.

He got the idea to start an organized two-on-two basketball tournament in Arlington after he played in a few tournaments run by his friend, University of Nebraska-Lincoln senior Isaac Woita.

After a smaller-scale inaugural Arlo 2v2 took place in 2018, the tournament has now grown to include 32 teams, which represent 32 towns across Nebraska. Duos of collegiate basketball players, Nebraska All-State high schoolers, and even father/son teams have all traveled to Arlington to compete in Helms’ tournament and dunk contest.

There are several reasons for the tournament’s growth.

“A lot of the players who were rivals in high school can all just socialize and make friends and bring up some funny memories while still playing basketball,” Helms said.

If you ask the players, however, most say it is Helms’ dedication to provide the best competitive, fun experience that brings them to rural Arlington every year.

“I have a lot of respect for Zach keeping the tradition alive because it is a ton of work and stress to get it all planned out,” Woita said. “He does a tremendous job advertising and making sure the local town gets recognized. That’s what it’s all about!”

It’s not easy to put on a high level tournament as a busy college student, Helms said, but he does it to impact his community and has even raised money for local charities through Arlo 2v2.

“I have some of the top players in Nebraska in my own backyard,” Helms said. “I always feel passionate about basketball and passionate about Arlington, and when you combine those two things, it’s just special.”

While Helms has made a profound impact on his hometown, Arlo 2v2 and basketball have shaped his life tremendously.

Helms has created lifelong friendships sparked by the interactions he’s had through organizing the tournament, coaching at Wayne State and running CreighTakes, he said.

“We’ve always been friends,” said Justin Allen, a UNL senior whom Helms has recruited to help with the logistics of Arlo 2v2. “But with him being in Wayne and me in Lincoln, 2v2 is just a great opportunity to bring us together and a good excuse just to hang out and see each other.”

Each of Helms’ involvements in basketball have allowed him to make professional connections as well.

Former Creighton basketball player Josh Jones reached out to Helms and asked if CreighTakes would provide traveling coverage of the Creighton alumni team in The Basketball Tournament, a nationally televised tournament featuring some of the game’s biggest stars. The team is coached by Jones and Helms’ favorite player, Doug McDermott.

“It’s a really cool opportunity for me and CreighTakes,” Helms said. “I think things like this will keep coming up, and I’m gonna take advantage of them. I always want to be around the game.”

It’s an attitude that projects well for Helms in his dream of working in basketball. While it’s hard to balance time between school, coaching, CreighTakes, and Arlo 2v2, Helms said it’s always been in his nature to always be around basketball.

His former teammates can attest.

“Helms is a very passionate basketball player on the court,” Landon Walkenhorst said. “He expects success, he hustles, and plays his heart out no matter the score, and those same things can be said about him off the court. He puts his heart into whatever he’s devoting his time to and it shows.”

That determination for perfection is seen outside of basketball as well. Whether it’s running a basketball tournament, playing the violin, or even mastering card tricks, it seems as though Helms is always pursuing excellence.

It’s no surprise that stars like O’Connell, Feazell and Andronikashvili are fans of Helms. He plans to continue growing a fruitful career in basketball, and he’s got the support system to do so.

“I’m just really blessed,” Helms said. “Basketball has given me a lot.”