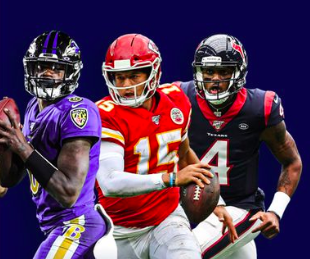 A big controversy is going on right now around Patrick Mahomes and Lamar Jackson and who is better. So, I wanted to look at them as well as the other quarterbacks drafted in 2017 and 2018 who are now starting for their respective teams.

The quarterback position might be the most controversial topic in football. Let’s look at all of the different metrics used when comparing quarterbacks before coming to any kind of conclusions.

First, I compiled all of the stats for regular-season games played by the quarterbacks and broke them down to the basics. I looked at career wins, losses and starts. 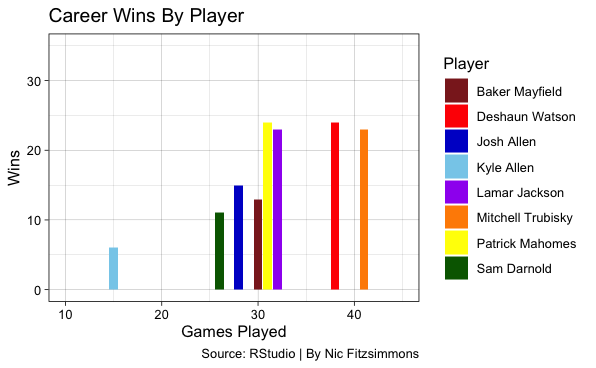 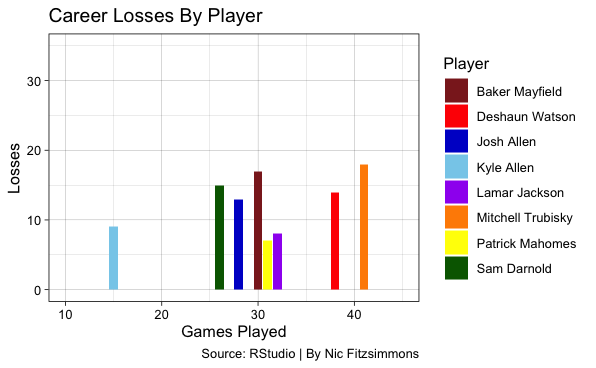 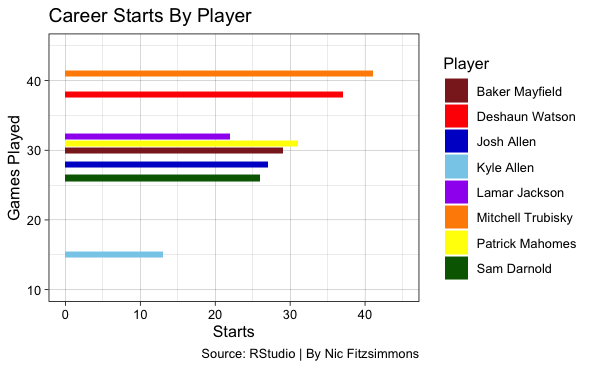 From these graphs, Mitchel Trubisky and Deshaun Watson have played a lot more games than everyone else and have about the same number of wins. Trubisky has recorded four more losses but has played in three more games than Watson.

Mahomes and Jackson also have the same number of wins as Watson and Trubisky at 23 and 24. Jackson has played in one more game than Mahomes, but Mahomes has more career starts. 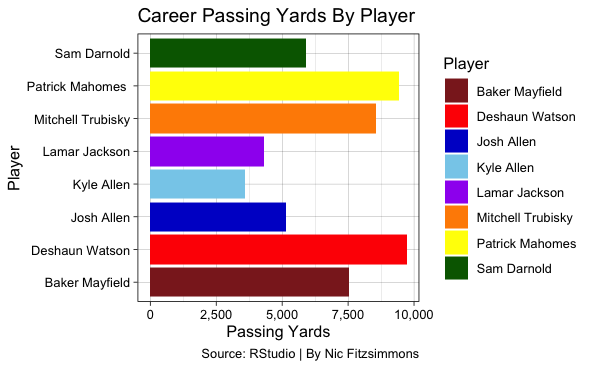 This statistic is personally hard for me to look at because when a quarterback has high numbers for passing yards, that usually means they aren’t getting a lot of help on defense or in the running game. This is still an important stat and players want to accumulate more passing yards than not. Watson leads the pack, but Mahomes is a close second with seven fewer games played. 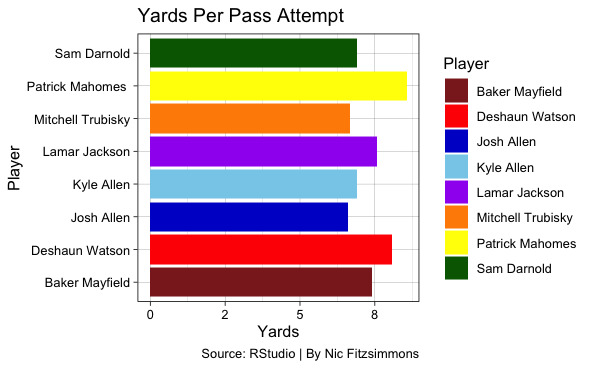 Mahomes takes the cake here, followed by Watson and Jackson. Firmly behind Jackson is Baker Mayfield. 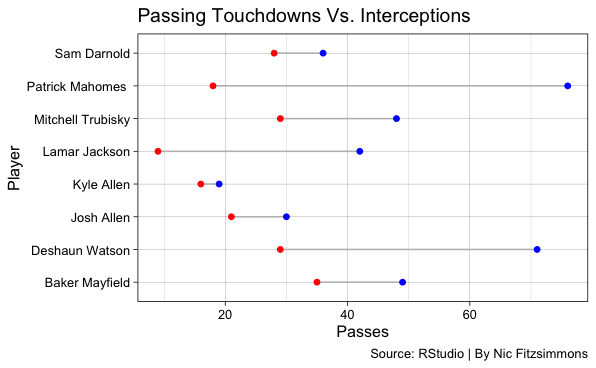 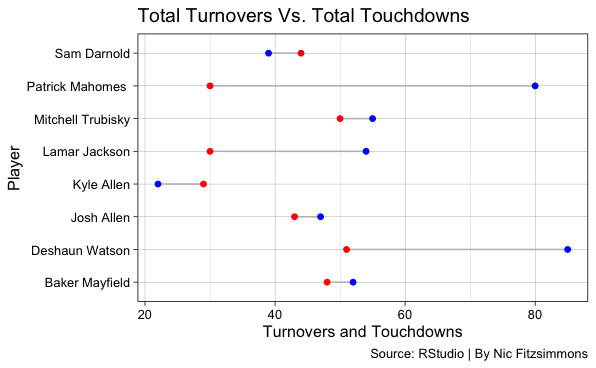 Touchdowns and turnovers ultimately determine wins and losses. The quarterback being the most crucial position on the field determines whether his team puts up points or turns the ball over. Watson and Mahomes continue to dominate these stat lines, with Jackson still close behind, resulting in more wins for their respective team. 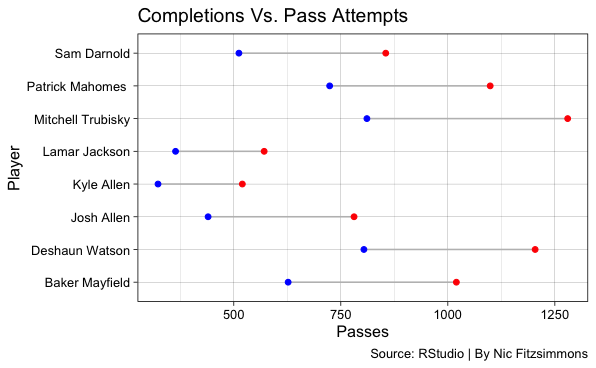 This made me curious to just look at their completion percentage. 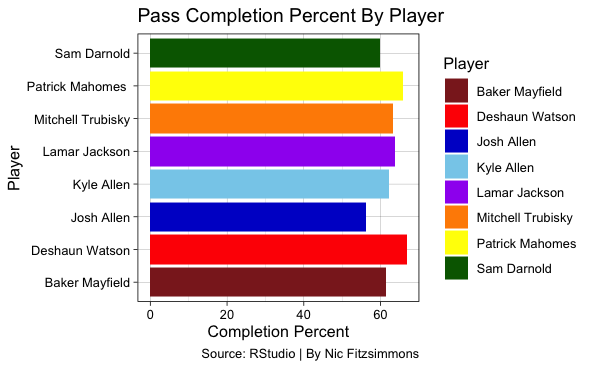 This statistic is continuously changing after every throw a quarterback makes. When looking at this analysis, you can generally get a feel for how each quarterback is performing. Schalter and Hansen from the Bleacher Report said, “anything below 60 percent meant a quarterback probably wasn’t living up to expectations.” If this is true, we can see that Josh Allen Sam Darnold are living up to their potential.

With that, the other six quarterbacks are above 60 percent with Watson and Mahomes again leading this category. 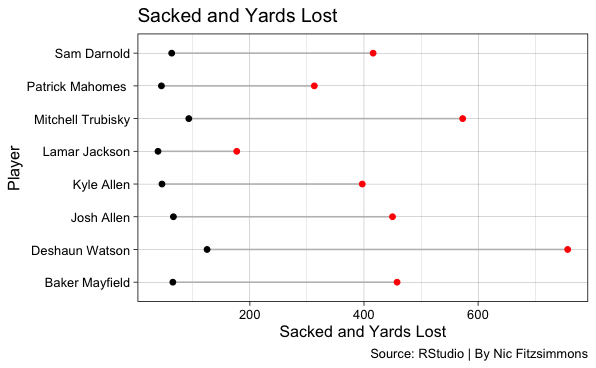 The offensive line has a significant impact on how its quarterback performs. Watson has been sacked way more than any of the other quarterbacks. As a result, he has lost more yards than any of them. Mahomes comes in second behind Jackson, who was sacked the least amount of times. Jackson has the least number of yards lost. Mahomes was only sacked six more times than Jackson but lost 136 more yards. 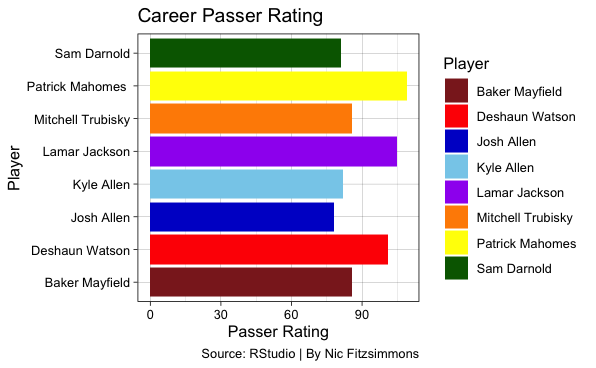 The more statistics used to determine who is a good quarterback and who is bad, the better chances you have of being right.

Four categories are used when compiling a passer rating: percentage of completions per attempt, average yards gained per attempt, percentage of touchdown passes per attempt and percentage of interceptions per attempt. The system that was adopted in 1973 is now 46 years old and still one of the most important statistics to quarterbacks today. In most cases, the highest-rated passer is often the quarterback who looks like the game’s best passer. It is no surprise that Mahomes leads this category with his unbelievable numbers since taking over for Alex Smith and becoming the Kansas City Chiefs go-to guy.

I wanted to see how they each stacked up in the rushing game. So, I created a plotly that shows each quarterback’s career rushing attempts and total rushing yards. When visiting this link, make sure to hover over each plot, allowing you to see each player’s name, rushing yards, rushing attempts, and the total number of touchdowns. 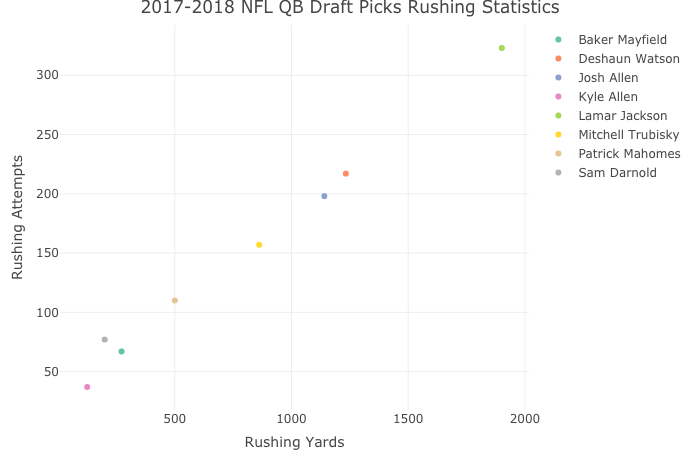 From this plotly, it’s evident that Jackson was the No. 1 quarterback in rushing yards and rushing attempts. I can’t say I’m shocked to see Jackson so far ahead of everyone, including Watson, even though Watson has around 10 more games under his belt. I also wasn’t surprised to see Kyle Allen at the tail end of things again, playing way fewer games than the other seven quarterbacks.

I did find it surprising to see how much Josh Allen ran the football. When hovering over all of the players, you will notice that Josh Allen averaged more yards per carry than Watson. SamDarnold averaged the lowest number of yards per carry.

While Jackson blew everyone out of the water in rushing yards and attempts, he came in third in rushing touchdowns with 12. You will find Josh Allen at the top with 17 rushing touchdowns followed by Watson with 14, Trubisky with seven and Mahomes with four. Kyle Allen, Mayfield and Darnold all have three.

After compiling all of the statistics through these young men’s early career and completing the analysis, I think it’s safe to determine the Super Bowl 53 most valuable player Mahomes as the top quarterback from the pool of quarterbacks in the 2017 and 2018 NFL draft, followed by Watson, Jackson, Trubisky, Mayfield, Kyle Allen, Josh Allen and Darnold.

Despite this, Jackson has a chance to make the jump to the top if he keeps performing at the top of his game.