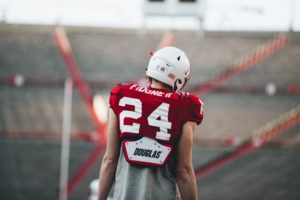 At spring football practice, Thomas Fidone fell to the ground and felt his knee twist.

He knew immediately that his leg was hurt and his season was at stake.

One of those gifted enough to play football at the highest collegiate level, Fidone was the No.1 tight end recruit in the nation in 2021 with 36 offers to play Division I football across the country.

But his injured knee required surgery and put a stop to whatever hopes he had of playing for the first time in front of 90,000 fans.

“There are very few tight ends who can move or run routes like I can. I’m not a traditional tight end, more like a Kyle Pitts,” Fidone said.

Committing to the University of Nebraska-Lincoln in January of 2021, Fidone continued developing on the field, in the weight room and in the classroom.

Despite not being able to do what he loved, Fidone found a way to grow as a man and as a player, even without touching the inside of the white lines that season. The Council Bluffs, Iowa native became known for his gritty work ethic both on and off the field.

Gabe Ervin Jr., a freshman running back for the Huskers and Fidone’s roommate, noticed his teammate’s passion for the game in wanting to do everything right. As some kind of hometown-hero, Ervin Jr. knew Fidone bled Husker red.

“I notice the little things about Thomas, the things that make him great at football and also how much he loved Nebraska, being from the area,” Ervin Jr. said.

After the injury, Ervin Jr. offered Fidone his advice and challenged him to fight past it.

“Everything happens for a reason,” Ervin Jr. said. “This time, it happened to you, and it’s how you react to the injury. Are you going to let the injury beat you, or are you going to overcome it and come back stronger?”

Nationally, Fidone is one of roughly 7,000 Division I football players, yet believes his injury and rehab set him mentally ahead of the competition.

“Everyone’s got to go through adversity,” Fidone said. “I went through mine, and a lot of people wouldn’t be able to bounce back like that; it takes a different mentality that a lot of people don’t have.”

While rehabbing in Lincoln over the summer, Fidone had one thing on his mind that helped him focus on his recovery.

“To never let it happen again. I thought about how I can make sure it never happens again, whatever it takes,” Fidone said.

Fidone answered his roommate’s challenge, hitting the gym only weeks after his injury and showing up for practice, even if it meant only being able to encourage his guys from the sideline. Outside of practice, Fidone hasn’t let the injury affect his mood, either, friends say.

“Thomas is a goofy dude who can get serious at times; he is a friend who loves and cares about you on and off the field, which is what we created our relationship on,” Ervin Jr. said. “He encourages us every day in practice as well to get better and better.”

As the fall football season approached, so did Fidone’s return to the field, but not quite yet. Fidone’s cousin, Sal Fidone, who ran track at the University of South Dakota, had similar injuries to the tight end and returned to action too early, a mistake he won’t let Thomas make.

“I always tried to get as healthy as possible as fast as possible and get right back to it because they needed me. He needs to take his time with recovery, listen to his trainers and have trust in those guys cause they know what they are doing,” Sal said.

Fidone knew he wasn’t quite ready either, but that didn’t bring him down. It did the opposite, actually. On game days, Fidone tries his best to get the fans into it, jumping up and down with his teammates, pumping the crowd up with his arms.

“I try to bring a lot of energy,” Fidone said. “Against Buffalo, I’d say I was probably the most energetic person on the sideline, bringing all the energy. If there was a consensus on the team, I’m sure everyone would agree.”

Now, it’s all about getting the chance to finally step on the field and do what he does best.

“He’s just ready to grind and get back out there with his team. I think he is ready to show everyone all of the work he has put in and will continue to put in for Nebraska,” Sal said.

Hoping to still play as a freshman next season, Fidone said he wants to improve his health and learn at practice, even if it is outside of the white lines.

“Once I realized I could potentially be back in a few weeks, I said screw it and got to work,” Fidone said. “I’m able to see different things now that I’m not on the field and kind of help where I can.”