MENUMENU
Home Sports Did the 2008-09 Texas Longhorns deserve to be in the Big 12...
Facebook
Twitter
WhatsApp
Print

In 2008, the Big 12 Conference had a year filled with controversy.

The Oklahoma Sooners made the Big 12 Championship over the Texas Longhorns and the Texas Tech Red Raiders. All three teams finished 7-1 in the Big 12 South, ending in a three-way tie for first place in the division.

The Big 12 decided to use which of the three teams had the best Bowl Championship Series rating to determine who would play the Missouri Tigers in the Big 12 title game. This ruling meant that journalists, coaches, and computer rankings would decide who would play the Tigers.

The controversy that surrounds this season stems from a simple fact: Texas beat Oklahoma earlier in the season and both teams finished with the same record. Oklahoma had a .9351 BCS average, while Texas had a BCS average of .9223. Insanely close.

Minus the controversy, the Big 12 Conference had arguably the best year in conference history as seven of the twelve teams finished with eight wins or more. Players like Sam Bradford, Colt McCoy, Dez Bryant, Michael Crabtree, Ndamukong Suh and many more notable future pros dominated.

Texas quarterback, Colt McCoy (2006-09) was one of the most consistent QB’s in college football history.

Before Joe Burrow had his unreal season in 2019-20, the closest quarterback that came close to McCoy’s passing percentage was Kellen Moore, and he wasn’t even that close.

Burrow broke the all-time passing yards record in a season and completed 76.3% of his passes. Yet, McCoy still holds the highest passing completion percentage of any quarterback in college football history at 76.7%.

This demonstrates how fortunate the Longhorns were to have McCoy under center and how much of an impact he had for years to come.

In order to win games you have to play defense, even in the Big 12. The Big 12 Conference has always been known for their offensive power, but in the late 2000’s they had some of the best defenses in the country. 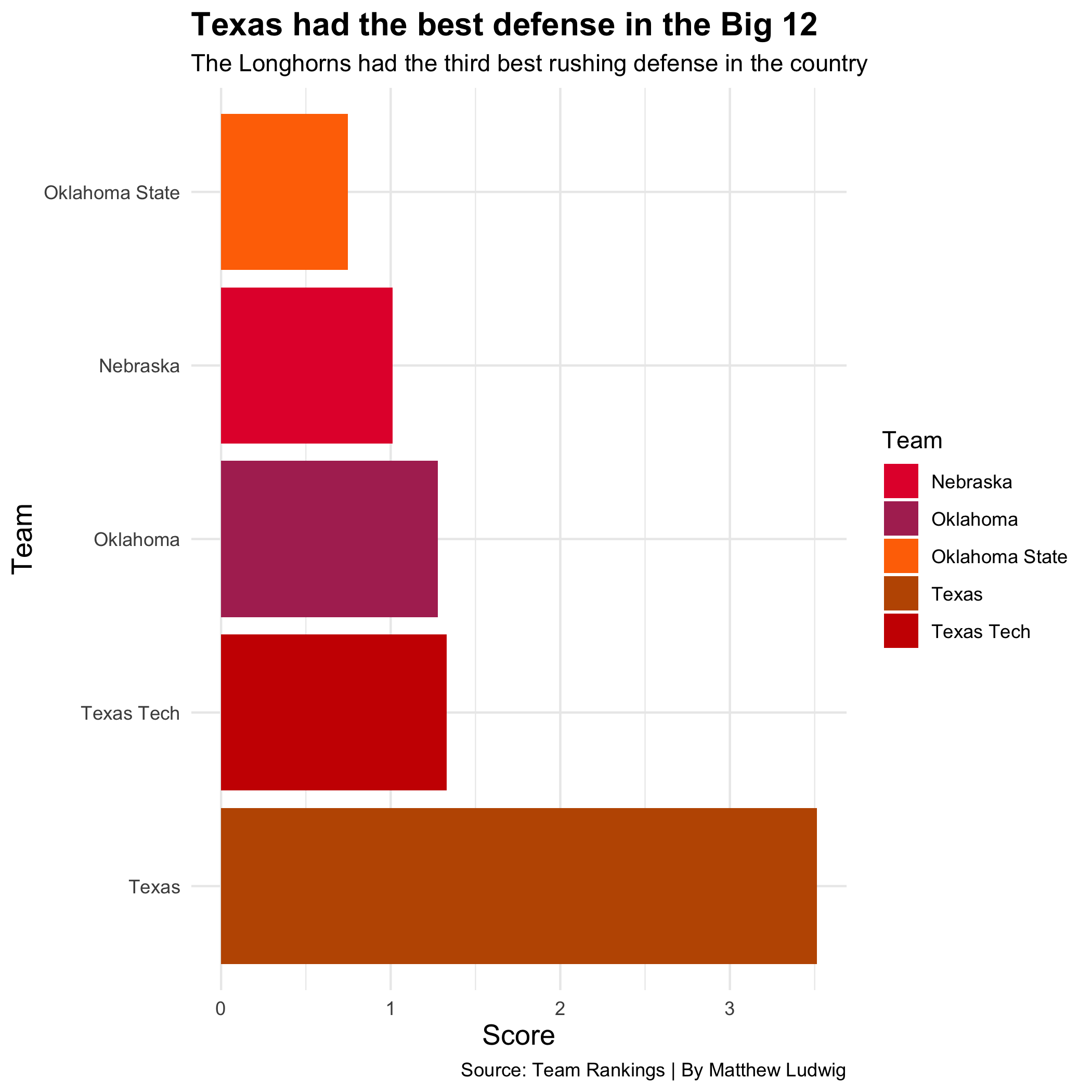 Z-scores — where stats are put on the same scale, with 0 being average — are good for comparing teams/players by year or era (hence in this example, every team’s defense in the Big 12). The higher the z-score, the better. This specific z-score consists of yards given up during the season and average points given up per game.

The Longhorns had the best defensive z-score in the Big 12 by a pretty reasonable margin. Texas allowed the fewest amount of yards the entire season and only gave up an average of 18.6 points per game. Texas knew how to stop the run, as they had the third best rushing defense in the country.

Colt McCoy wasn’t the only widely known star on offense. In 2008-09 the Longhorns had the best wide receiver in school history, Jordan Shipley. The words “McCoy to Shipley” still gives Big 12 defensive coordinators nightmares to this day. This QB /WR duo was almost unstoppable. 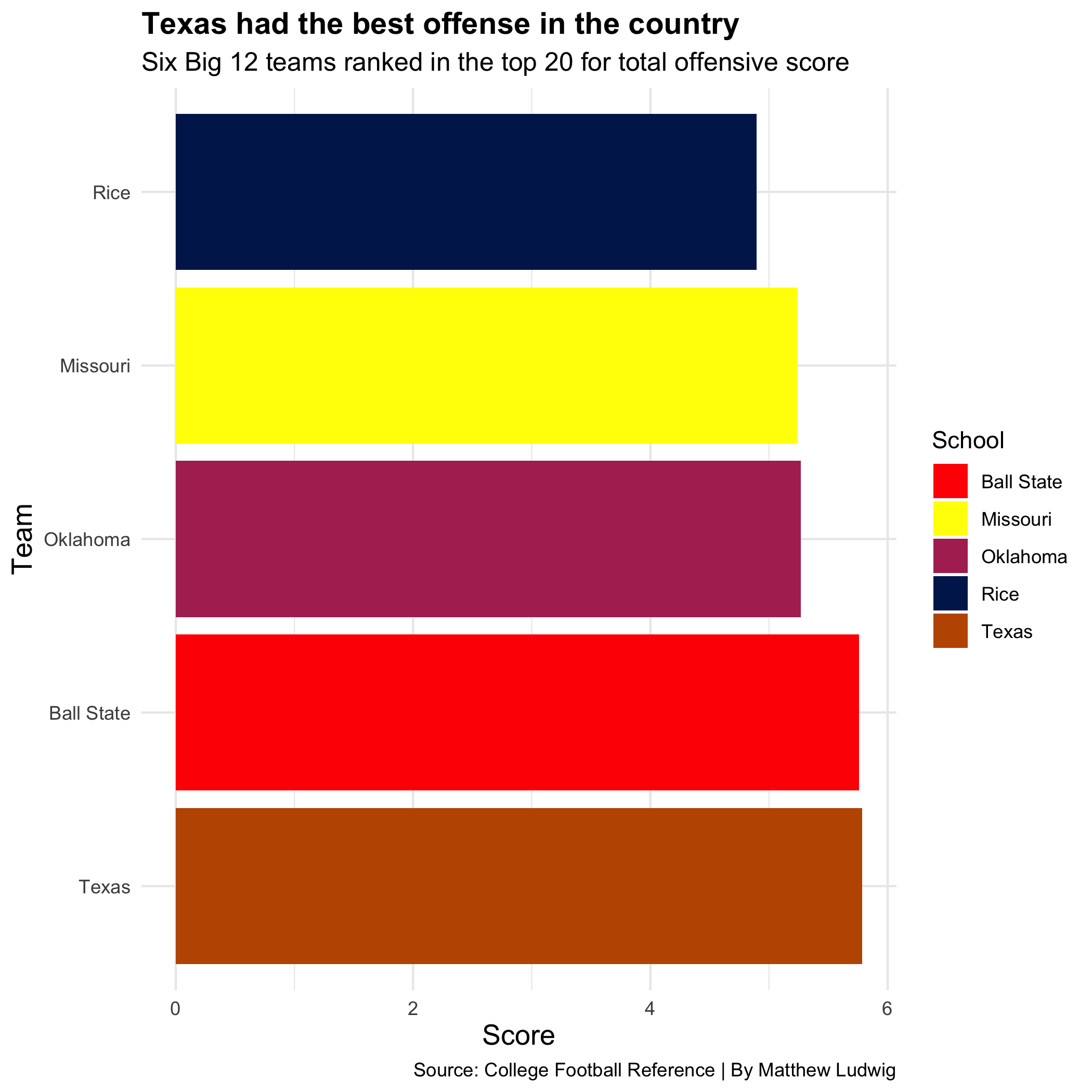 Using passing percent, penalties, turnovers, and offensive yards, Texas had the best offensive z-score in the country. The Longhorns had very few penalties and rarely turned the ball over.

Six teams in the conference ranked in the top 20 for total offensive z-score, it shows how talented the offenses in the Big 12 were.

The hype around the 2008 Red River Rivalry game was outsized. College Gameday came to Dallas in week 5 to see the No. 5 Longhorns vs the No. 1 Sooners.

Texas beat Oklahoma, 45-35 and gained the No. 1 ranking in the country a couple of days later.

The reason the Longhorns won? Their rushing defense was outstanding. OU averaged 198.5 yards rushing per game, Texas held the Sooners to only 48 yards on the ground. Texas had 302 passing yards and 161 rushing yards. Oklahoma had 409 yards passing and 48 yards rushing. UT outgained OU by six total yards.

Texas beat No. 1 Oklahoma and No. 11 Missouri. The Longhorns lost once in the season at No. 7 Texas Tech on a last second touchdown.

OU didn’t play Missouri until the Big 12 Championship, but the Sooners demolished Texas Tech on Nov. 22. That was the most critical reason why Texas didn’t get the higher BCS standing over Oklahoma. Texas losing to Texas Tech and Oklahoma beating the Red Raiders in that fashion was a bad look for the Longhorns resume.

If the Longhorns held on and won the game against the Red Raiders, there would be no controversy. In the bowl games, Texas won the Fiesta Bowl and finished the season ranked No. 4, OU lost to Florida in the National Championship, and Texas Tech lost in the Cotton Bowl.

Texas had the best defense in the Big 12 and also had arguably the best offense with one of the best quarterbacks in the country. There is enough evidence to say the Longhorns had the better team in 2008-09 than Oklahoma and they deserved to be in the Big 12 Championship, beat the Tigers once again, and play Florida in the National Championship.