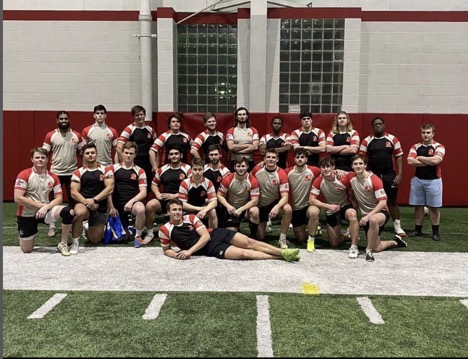 Seemingly nothing could stop Nebraska club rugby team as the 2019-20 school year neared. The Huskers closed their 2019 spring sevens season as one of the best squads in collegiate club rugby.

Nebraska impressed in a tough Heart of America Conference, took home the league championship and earned an appearance in the 2019 College Sevens National Championships in Tucson, Arizona, where the team finished No. 11. By all accounts, the Huskers seemed to be ready to parlay their successes in the fast-paced, seven-a-side variation of rugby to its 15-a-side rugby season in fall 2019.

Team leaders were ready to run it back in spring 2020 with an improved, more seasoned sevens squad.

“The team that went to nationals in 2019, they’ve even admitted that they weren’t quite to the national level that they should’ve been,” Nebraska club rugby president Brennen Palmer said.

Only the COVID-19 pandemic altered those plans.

The pandemic canceled the sevens season in the spring of 2020, then Nebraska’s rugby team didn’t play at all in the 2020-21 season due to continued COVID-19-related concerns. A lengthy period of inactivity proved difficult to overcome for club leadership, especially in the wake of Nebraska’s accomplishments in sevens on a national stage.

The Huskers returned to a normal schedule in the fall of 2021, and wrapped up their 15s season in November with an eighth-place finish in the conference. Still, the team entered the offseason excited with the progress it made in the fall and built plenty of momentum for the spring campaign ahead.

“We made a lot of good strides [before the 15s season] with recruiting,” Palmer said. “We had a good core group this year. We probably had one of the larger forward packs in our conference this year, which is something different. We’re normally outweighed by quite a bit… We just got outworked because we didn’t have the depth we should have.”

Since the general student body returned to campus in mid-January of 2022, Nebraska rugby has hit the ground running in preparation for defending its place atop the conference in sevens, where the Huskers are unquestionably stronger according to Palmer.

In addition to two-hour practices on Tuesday and Thursday nights, the team has implemented morning conditioning workouts and post-practice strength and agility work, according to Palmer. While these sessions are optional, Palmer said that the team has seen consistently solid attendance — a further testament to the team’s determination to have a strong spring season.

Aside from rugby-focused training, Palmer said that the group preparing for the sevens season has spent plenty of time together off the field. Seven-on-seven rugby is much quicker than traditional 15s rugby, with sevens games lasting just 14 minutes compared to 80 minutes for 15s games. Because fewer players are on the field at a time, strong chemistry is an absolute necessity in putting together a strong sevens team.

“In sevens, it’s really important to have team chemistry and be able to read off each other, and you can’t just do that on the field,” Nebraska club rugby vice president Jeron Johnson said. “You have to be hanging out off the field and things like that.”

Little things like post-practice dinners and morning conditioning sessions add up. It’s a crucial part of what makes the club rugby team at Nebraska such a successful program and why it enters the sevens season as the defending No. 1 seed in the conference.

Maintaining that standard of winning and dominance in sevens can be tricky for a program veteran like Palmer. Given the length of time between the last sevens season Nebraska played in, there’s been team-wide emphasis on reiterating that, despite a litany of new faces, the Huskers are still the team to beat.

“The older guys have definitely kind of put it in our minds that there’s that target on our back,” Johnson said. “Personally, I don’t feel any pressure. I’m pretty confident in the team and our capabilities. I know that there are going to be certain players on certain teams that have experienced that, and they’re going to want to beat us more. As a team, we’re staying pretty confident that we’re working harder than the other guys and so we’re going to perform better than them.”

In preparation for nationals, Nebraska will face a litany of outside opponents in order to get the team prepared, according to Palmer. On April 2, the Huskers hosted the north division of the Heart of America Conference for a one-day, round-robin sevens tournament. The Huskers welcomed Minnesota, Iowa, Iowa State and Truman State, and how teams fare in the divisional tournament will help determine seeding for the conference tournament on April 16 hosted by Iowa.

Repeating in the Heart of America Conference will be no easy feat. Palmer noted the strength of the Cyclones’ program in particular, particularly their strong sevens squad. The south division, which features Kansas, Kansas State, Missouri, Oklahoma State and Arkansas, figures to be equally as strong.

The April 16 Heart of America Tournament, which features all 10 teams in the conference, will help determine whether or not the Huskers are able to make it to nationals. Palmer and Johnson said that the Huskers would be a shoo-in for nationals if they won the tournament but might also earn an at-large berth if they were to finish in second place.

Settling for second place isn’t the team’s goal, though.

“With us being the reigning conference champs, we just want to go out and dominate and win the conference again because that gives us an automatic bid,” Palmer said.

As far as Johnson is concerned, there’s plenty of optimism that Nebraska can in fact make a return to nationals. The Colorado native and called this Husker squad “one of the best teams he’s been a part of,” a testament to the long hours spent recruiting by Palmer, Johnson and other club officers.

Palmer, who is unable to play in the spring season after suffering a severe shoulder injury in the fall season, has a simple goal he’ll look to emphasize while cheering his teammates on from the sidelines

“We definitely want to win the national championship,” Palmer said. “That’s the goal every year.”

Above all, they’re just grateful to be on the field again.