MENUMENU
Home Sports Football student manager lives out his dream to be more than a...
Facebook
Twitter
WhatsApp
Print 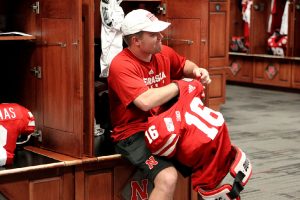 Sunday mornings are a day meant for reflection as some University of Nebraska-Lincoln students wake up mostly hungover from a long night, drinking in celebration after a football game just hours prior.

But for one Nebraska football student manager, the obligations spill over into their day of reflection and pretty much every other day of the week.

“Sunday mornings, we would have to clean and repair the helmets after games and that’s always kind of something you don’t want to do,” Kyle Young, a UNL graduate assistant, said.

Young bled Husker red from the day he was born. Growing up, he had one goal in mind: to be at every Nebraska football game.

“When I came to Nebraska, I just wanted to be a fan, but then I wanted more, you know, I want more than this,” Young said.

Realizing that his capacity was limited by his size and athleticism, Young did the next best thing: work in equipment.

“For somebody like me, it was a good place to start. You are around in the building doing stuff all the time. I was lucky enough to get a chance there, because not everyone does,”  Young said.

Gaining experience during his undergrad as one of equipment managers, Young was able to live out his dream, even if it wasn’t exactly how he pictured it as a kid.

“At some point every day I’m like, am I really doing this? I’m extremely lucky to be in the position I’m in. I get to do something different every day, doing something I never imagined I’d get to do,” he said.

Even with a swirling schedule full of recruiting visits, calls and questions from prospects about the program, Young embraces the grind for his lifelong passion.

“My job is to help answer questions and concerns that parents or recruits might have. It’s a little different than usual since I didn’t play here, but I spent my time as an undergrad around the program and graduated from school here, so I’m able to give a different perspective than most people in the department.”

After graduating with a bachelor degree in business administration, Young is in his final year of graduate school and looking forward to the future.

“I’d love to stay here at UNL, but you have to go where there’s an opportunity,” he said.

On the chance he doesn’t get to stay in Nebraska, Young is ready to make the move, alongside his fiancé, Paige.

“Since I’ve met him, there’s nothing I’ve ever seen get him more excited than sports, and they consume his life,” she said. “Even when we first started dating, we were pretty career-driven and had big goals and didn’t want to have to sacrifice those and be able to encourage each other and pursue those. I’m fully committed for the next 20 to 30 years of my life to moving whenever, and lucky for me as a teacher, that will work.”

While Young was able to do things he couldn’t even imagine as a child, he had to make sacrifices to get there, mainly with his friends and family. With little off-time from work and school, Young tries to juggle his relationships with his parents and his brother, Seth, while also spending time with his friends and Paige.

“On game days, it’d be nice to watch football games with my brother again like we did all through high school, but he’s always busy with it, taking calls from coaches at family events among other things, but I really admire his dedication,” Seth said.

Because his weekends are filled with game days and recruiting visits during the season, regular “social hours” are not on Young’s agenda— one of the few things he would have liked to experience in school that he couldn’t because of his responsibilities to his job.

“Game days at Nebraska are a big thing socially, and I missed out on that, but I never really found myself envious of what they were doing. I always thought I had the better experience on game days,” he said.

Prior to becoming a full-time employee, Young had a little extra free-time and help from coworkers getting into a daily rhythm.

“Equipment was great because I was able to do anything that I needed to do. I was able to manage my studies and still do well in school while also having a social life outside of that, so it definitely takes up time but if you manage your time well it’s very rewarding,” he said.

With a supportive family around him, Young is able to enjoy making a living without any guilt about quality time missed.

“I hardly ever see my fiancé but she’s great and supports everything,” he said. “She tells me all the time how tough it is but she loves that I have the opportunity to do what I’m doing, and she understands it.”