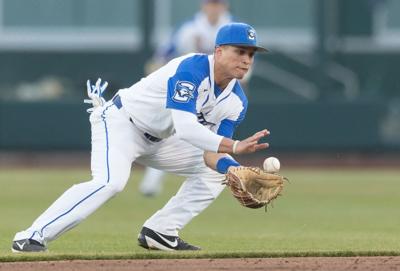 When Issac Collins was just four or five years old, his family moved to Omaha, Nebraska. Little did Collins know, this city would open the door for his future of becoming a Major League Baseball player.

Before arriving in Omaha for the first time, Collins lived in Pittsburg, Pennsylvania. Then his family moved to Omaha and stayed for less than three years before relocating to Maple Grove, Minnesota where Isaac and his older brother Roman would graduate high school.

“It was so long ago, I honestly didn’t remember Omaha that much so it was a little bit of a change,” Collins said. “But it’s very similar to Minneapolis and I like the people here a lot so it was a pretty easy adjustment.”

Collins was a three sport athlete and excelled in both baseball and football at Maple Grove high school. He also earned one varsity letter in basketball.

Collins was the first player since former Minnesota Twin Joe Mauer in 2001 to be named a finalist for the Mr. Minnesota award in both baseball and football. He had the opportunity to play either of the two sports in college, but Collins knew that his future was in baseball more than a year before he graduated.

“Honestly, I probably knew my junior year when I got heavily recruited for baseball more than football, especially at the Division I level, so I knew that I would probably be playing baseball,” Collins said. “Also my older brother Roman played college baseball.”

Collins said he knew his junior year he was going to be playing baseball, but he didn’t know where he would be playing until later.

Creighton’s coaching staff first saw Collins play in the summer before his junior year when he was playing at a wooden bat tournament in Atlanta, Georgia. It only took one game to draw their attention.

“The hitting coach called me after a game and said he was really interested,” Collins said. “They offered me a big scholarship right away over the phone and that they wanted me to come visit,” Collins said.

From there, Collins knew Creighton was extremely interested in getting him. With only 11.7 scholarships to offer and 35 roster spots to fill, anytime a player is offered a scholarship to play college baseball they are one of that coaching staff’s top priorities.

This wasn’t even the extent to how much of a priority Collins became for Creighton’s head baseball coach Ed Servais. Before Collins’ senior year, Servais drove six hours all the way up to his house with an assistant coach.

After the visit from Servais, Collins decided it was time to visit Creighton’s campus. His two hosts were 2016 first team All-Big East outfielder Danny Woodrow and 2016 second team All-Big East shortstop Nicky Lopez. Both players have since been drafted to MLB organizations.

On the visit, Woodrow and Lopez showed Collins around campus, downtown Omaha and even brought him to a party.

“Right after that I knew I should probably go to Creighton because they showed the most interest out of any other school,” Collins said. “They really wanted me to come, so it was a no brainer.”

Collins’ career at Creighton began with a position battle at second base that lasted an entire week. By the second week of the season, Collins had proved he was the starting second baseman and would go on to start 44 games in his freshman season.

In his freshman year, Collins was first on the team in stolen bases with 11 and second on the team in hits with 46. This led to a second team All-Big East selection.

Starting in all 50 games he played in his sophomore year, Collins collected more hits than his freshman year, but saw a drop in his batting average. He once again led the team in stolen bases with 12, and also led the team in triples with four.

Collins finished his Creighton career his junior year with better numbers than both previous seasons recording 71 hits, 13 stolen bases and a career high .293 batting average leading to a first team All-Big East selection. Throughout his career, he led the team in stolen bases all three seasons and triples in the final two.

Even so, none of these statistics or personal accolades come to Collins’ mind when looking back on his three year Creighton career. Instead, he thinks about those who he spent it with and where they spent it.

“My favorite part about playing at Creighton was definitely my teammates because I thought they were all super cool. I enjoyed playing with them and playing at TD Ameritrade obviously was really fun, but honestly just my teammates,” Collins said. “I have a lot of great memories at Creighton and most of them were off the field.”

Regardless of his relationship with his teammates, though, Collins’ college career ended after his junior season when he decided to leave early and declare for the MLB draft. He knew he had a good opportunity to play professional baseball and he wanted to follow in his brother’s footsteps.

“June after my junior year [of high school] was when he got drafted and I was like ‘Damn. I wanna do the same thing for sure’,” Collins said. “He definitely influenced me to pursue the same path as him.”

His older brother Roman Collins was drafted in the fifth round by the Kansas City Royals after a college career that began at Des Moines Area Community College in Boone, Iowa and ended at Florida Atlantic University in Boca Raton, Florida. Roman played three seasons in the Minor Leagues and is now finishing up school looking to pursue a new career.

Still, Collins needed the exposure to be able to pursue the dream of getting drafted just like his older brother. This exposure began after his sophomore season when he played in the Cape Cod League in Massachusetts. Being one of the nation’s premier collegiate summer leagues, the league boasts over one thousand former players who have gone on to play in the major leagues.

During his summer in Cape Cod, which he described as “a really good summer”, Collins recorded a .320 batting average with 47 hits in just 44 games. His exposure didn’t stop there.

“That fall, a lot of teams came in to watch my teammate Will Robertson who was a big prospect, but also me and a few other guys,” Collins said. “So after the season, I kinda decided I wanted to play pro ball especially if I could get a good enough deal.”

The deal Collins was looking for wasn’t really from any specific team, but technically a group of teams.

“Ideally I was hoping to get with a team that had spring training in Arizona and that’s exactly what happened,” Collins said.

The Colorado Rockies selected Collins in the ninth round of the 2019 MLB draft. The deal included a $150,500signing bonus, which is exactly the slotted bonus for the 279th overall pick.

Not only did the Rockies have spring training in Scottsdale, Arizona, but they have a minor league system that Collins sees himself thriving in.

“Their whole mindset in the minor league system is just hit the ball hard, rake and steal a lot of bags which I think is really good for me,” Collins said. “I’m really happy to be with them. They’re very offensive minded.”

Collins arrived in Scottsdale for spring training on February 1, a whole month before minor league spring training actually started because they let them come down as early as they wanted. This way Collins got to begin working out at the facilities, which he described as “unreal.” He also got to start living his new, but temporary, Arizona life.

“It was awesome because in the month of February, I was working out playing baseball in the mornings until about 2:00 p.m. and in the afternoons I would just chill, play some golf and hangout with some of my buddies that went to [Arizona State University]. I was living the life in February,” Collins said.

Unfortunately for Collins, due to a global pandemic, spring training in Arizona ended short. With the NCAA college basketball tournament being canceled, the NBA suspending play and MLB delaying opening day because of the coronavirus outbreak around the world, minor league spring training had to follow suit.

“I was living the life in February, then four days of spring training went by and they banged it,” Collins said.

Even though MLB commissioner Rob Manfred canceled spring training, Collins was still drafted by a Major League organization and will continue working at his craft. Luckily for him, his former coach Ed Servais’ son runs a gym known as Servais Sports Performance.

However, Servais still needs to abide by social distancing guidelines.

“He’s letting like six guys in at a time, but there’s only like 12 of us that really go there,” Collins said. “I know Jake Meyers and Kyle Kubat are the two Nebraska guys that go there and then there’s a couple other Creighton guys with me that go so we work out there probably three to four times a week and that’s just lifting, no baseball.”

While the work outs don’t include baseball, Collins said he still tries to hit two or three times a week but isn’t able to as much because there just isn’t anywhere to go.

With MLB opening day still unscheduled, there are many uncertainties if there will even be a minor league baseball season. According to Collins, the path for a rookie like himself to make it to the Major Leagues is about six to eight years. Canceling an entire minor league season could make that time period even longer.