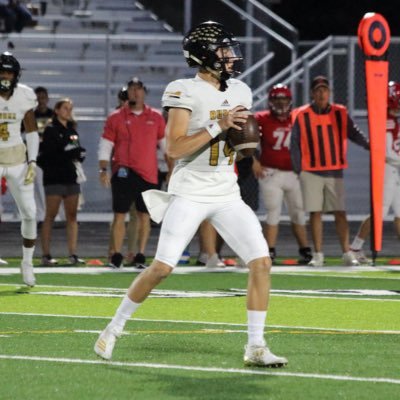 Reid Burke has been in love with football since he played for the Kingswood Athletic Association Steelers in second grade. Burke’s love for the game has lasted through his high school career and will continue at Central Missouri where he will play Division II college football.

“I’m looking forward to growing as a football player and a person. I want to be mentioned as one of the great QBs to go through UCM,” the Burke high school senior said.

Burke’s journey to Central Missouri included starting as quarterback for two different high schools in Omaha, Neb., and taking a handful of visits to Division I schools. In his high school career, Burke racked up 4,035 passing yards and 42 touchdowns with a 57 percent completion. According to MaxPreps, Burke also maintained a 100.3 quarterback rating throughout his career, throwing 14 interceptions.

The Central Missouri commit’s high school career began at Creighton Prep where he played in nine games as a sophomore and 10 the next season as a junior. Burke started two seasons with Prep but decided it would be best for him to transfer to Burke High School.

“The main reason I transferred was the opportunities it opened,” Burke said. “The coaching staff welcomed me and were great and the team had the same goal I had: to win.”

Burke and his new team did exactly that. The Burke High School football team finished the 2019 season with a 9-2 record, eventually losing to Bellevue West, the Nebraska state champions, in the semi-finals of the Class A Football Playoffs. Still, Reid enjoyed the one year he had at Burke, especially because of his teammates.

“My favorite part about playing QB for Burke was the guys I was around every day. Very few people get to be around as good of coaches and players as I was and throwing to Xavier was kind of nice,” Burke said.

Throughout his senior season, Burke was in search for the right place to continue his football career. While he is now committed to play for a Division II football team, Burke spent plenty of time talking with and visiting multiple Division I schools before making his decision to go to Central Missouri.

“I took around four to five visits to Nebraska, a visit to Notre Dame, a visit to North Dakota State and a couple others, but the only actual official [visit] I took was to Central Missouri,” Burke said. “As soon as that staff started talking to me, I could tell I was wanted and fit right into their system.”

Other than fitting perfectly in its system, there are multiple other reasons why Burke was attracted to Central Missouri’s football team. At schools like Nebraska and Notre Dame, Burke didn’t feel like he was needed. But during an in-home visit, Burke noticed the effort UCM coaches put into recruiting him.

“When the coaching staff first came to my house, I knew I was one of their top priorities, and they made that clear to me,” Burke said.

After figuring out that he fit well in the system and that he was an important target for UCM, Burke also learned about former Central Missouri quarterbacks and the success they had in their careers.

“The QBs they’ve had in the past and the offensive accolades that are associated with Central Missouri are unlike anywhere else in the country,” Burke said.

The three quarterbacks who stood out the most to Burke were Brook Bolles, Garrett Fugate and Eric Czerniewski. To this day, Czerniewski holds the Mid-America Intercollegiate Athletics Association records for the most career passing yards with 12,847, most career touchdown passes with 107 and the most pass completions with 1,043.

With their success in UCM’s system, Burke is confident he can do the same but knows he needs to be patient. Burke is already prepared to redshirt during his freshman year, and he plans on using that to his advantage.

“My goal is to learn the playbook as well as I can and to get bigger, stronger and faster,” Burke said.

Learning the playbook and getting stronger aren’t going to be the only things Burke has in store for himself his freshman year of college. Burke plans to get into the pre-med program.

“I’ve been shadowing multiple doctors now for about three years so that’s my plan,” Burke said. “But if that doesn’t work out, I’m also interested in business and sports management.”

Besides the high standard Burke will hold himself to in the classroom, he already has in place high aspirations for his future football career at Central Missouri. Burke’s goal at Central Missouri is to be an All American and a Harlon Hill winner, which is the Division II version of the Heisman Trophy.