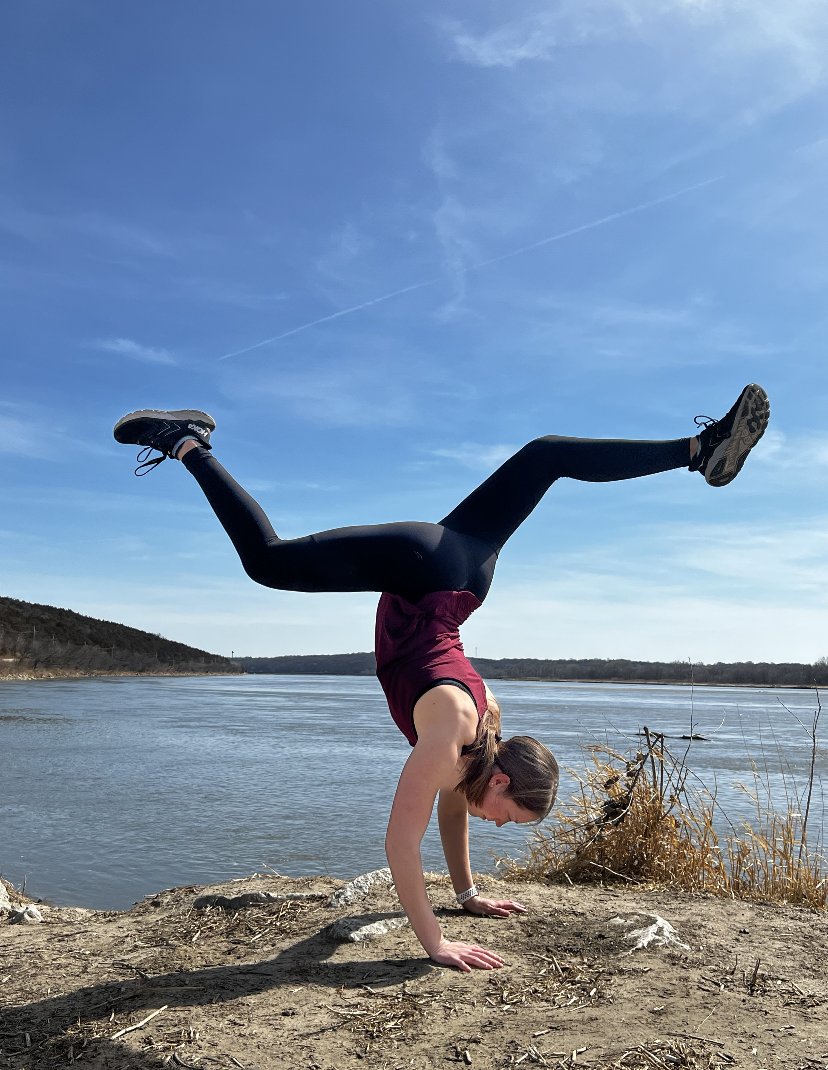 Gymnastics is one of the most popular sports for children in the United States. According to Statista.com approximately 4.81 million children that are the age six and older participate in gymnastics. During these athletes’ time in the sport, they learn many life tools that will help them succeed in life.

Shelby Andersen was once a part of this statistic and is now a 23-year-old ex-gymnast and gymnastics coach. After she competed in the sport that she has loved for years, she decided to become a coach in the Omaha area. There have been many ups and downs through her competition in gymnastics, but she seems to have finally found her place, as a coach.

Andersen competed in gymnastics until the age of 18. This sport has not only been a hobby but a life-changing role in her life.

Andersen was eight years old when her friend introduced her to competitive gymnastics. She attended the friend’s sleepover, which was being held at a gym in Omaha. While at this sleepover she learned what the sport was all about.

This not only gave her a chance to witness what gymnastics was but gave her more to talk about with her friend.

“I remember how much fun it looked, and I wanted to try,” Andersen said. “I am happy that I went to this sleepover because that sleepover is what brought me into the gymnastics world.”

Andersen quickly caught up in what the other participants had learned. While in her elementary and pre-school years, she was active and had already learned how to complete different moves.

Since Andersen was eight when she joined, she had lost a lot of important time and classes. Many join gymnastics start at a young age, around pre-school.

In her middle school and high school years, Andersen learned how to compete in the four main events including; vault, uneven bars, balance beam, and floor exercise.

While gymnastics is a sport, you do not only learn about gymnastics. Andersen said she learned many things that were not gymnastics based while being on a team. She learned how to be responsible and to always be on time.

“I needed to be on time for every practice and event,” Andersen said. “I learned time management and responsibility, which are really important to me.”

Gymnastics is also a great way to meet people. Andersen met many of her lifelong friends along her journey, including her friend, Rachel Simons.

Simons has known Andersen since the age of 17. Even though these two did not participate on the same team for long, they coached at the same place, Premier Gymnastics in Omaha. During this time they became good friends and considered each other family.

Andersen said she has met many people whom she still considers friends many years after being on the team.

“Gymnastics has definitely made me come out of my shell and socialize more,” she said. “It also taught me to test my mental boundaries and push myself hard and learn to get comfortable with being uncomfortable.”

From gymnastics, Anderson has also learned how to strive to be the best and to never give up.

While competition can be a challenge, the only way to overcome these challenges is by trying your best. If she could not figure out how to perform a trick, Anderson said she focused on this trick until she perfected it.

The skills that she has learned from gymnastics have helped her while coaching.

For Andersen, coaching came easily. She has taught most age groups starting from 5 to 16.

Anderson said coaching a class is fun for her. She gets to use all of the tools that she has learned from the past and teach another person, which she enjoys. Coaching is not only a job to her, but something that she loves to do.

While coaching, Andersen had many co-coaches, including Dakota Miller and Nick Goodlett. Miller and Goodlett also worked at Premiere Gymnastics while Anderson was there. During this time, he got to see how Andersen loves the sport.

“You can tell she loves working with the kids and the sport of gymnastics,” Miller said. “She puts a lot of time and effort into coaching and it is great to see.”

After years of competing in the sport, it is not always easy to transition into coaching.

Coaching is not the only job that Anderson has. She attended Nebraska Methodist College and is now a nurse. Even with limited time due to her full-time job, she still makes time to practice and coach the sport she loves.

Andersen said she has learned many important tools while coaching that she uses in nursing. She has learned how to communicate clearly and deal with stressful situations. Dealing with children who you coach may be different than dealing with patients, but she has implemented what she has learned into her career.

Gymnastics is an important part of Andersen’s life. She has learned many important tools that she uses in her career and life.

“I love gymnastics, and I can’t imagine not competing,” Andersen said. “I have learned a ton from the sport, and I plan on keeping gymnastics a part of my life as long as I can.”