Baseball has recently been headed in a downward spiral. With old-school values and unwritten rules, the game has given Major League Baseball plenty to try and change in order to keep younger generations interested to play the historic game. According to howtheyplay.com, in 2018 the MLB’s total attendance for the first time in 15 years dropped below 70 million.

A team in Savannah, Georgia named the Savannah Bananas is doing everything it can to make the game more focused on fun than strict rules that push emotion to the side. This includes half-inning productions, parades before the game and TikToks showing off their wacky rules.

As the Bananas gained traction on social media, Gretna, Nebraska and Huskers right-handed pitcher Quinn Mason got a front row seat for it. And to him it was a no-brainer to go to Savannah for the Bananas even with other options that he could have taken.

“I had the choice to go to the Wilson Tops or the Savannah Bananas.” Mason said. “I chose Savannah, obviously, who wouldn’t want to go there. It’s a circus, it’s unlike anything I have ever experienced.”

The Bananas’ owner, Jesse Cole, has said he wanted to create a nine-inning display of baseball and entertainment for one simple purpose: he thinks baseball is boring. Cole believed games could still last the same amount of time as normal baseball games. In Savannah, the fans came out in masses for the game but cleared in the later innings. Cole and the Bananas brass have made ‘Banana Ball’ an inning-by-inning spectacle that brings fan excitement to the forefront.

Mason played the 2021 summer Coastal Plain League (CPL) for the Bananas, and got immersed into the culture. He pitched 11.2 innings and gave up 15 hits, stuck out 13 batters and finished with a 7.71 earned run average. 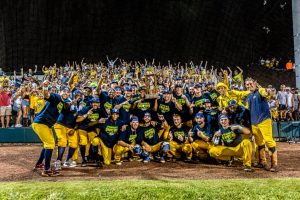 On its way to winning the 2021 CPL championship Savannah prioritized entertainment over wins and losses. Fortunately enough for the Bananas, the team did not have to suffer too many losses, however, the team’s main focus was getting to play the game of baseball and have fun playing it.

“We were so close and everything was going so well we kind of expected it,”  New Orleans left-handed pitcher Dylan Cunningham said. “But when we realized that the summer was over and that we had completed the task everyone was sad and we had people crying, not upset but bitter sweet. It was just a surreal moment with so many people in the stands too. It was an electric summer.”

Last spring, Nebraska won the Big Ten and pushed for the College World Series, but Mason had few chances on the mound. He arrived in Savannah after a handful of games had already been played but said he quickly knew that this experience was going to be unlike anything he had ever experienced before.

Mason’s love for the game of baseball was headed in the same downward spiral but his experience with the Bananas not only resurrected his baseball life, it also impacted him positively mentally. The Savannah sun and energy that the Bananas fanbase packs in the stadium were reinvigorating for Mason, as he also broke out of his shell and participated in the half-inning dances.

“Going to Savannah was the best thing for me,” Mason said. “I didn’t pitch much in the spring and just going down there was a total mindset shift in terms of going to the ballpark and having fun rather than having to goto the ballpark and ‘do’ baseball.”

Mason was a moderate participant in the dancing and entertainment that the Bananas encouraged players to do but it wasn’t like that from the beginning. According to Bananas assistant coach Adam Moreau, Mason needed time to adapt, but acclimated quickly.

“It probably took a couple weeks for him to realize that there is no comfort, you just have to be comfortable with anything that is getting thrown at you,” Moreau said. “Whether it is being thrown on the field to dance or taking your shirt off for a promotion or chucking Bananas in the stands or signing autographs. 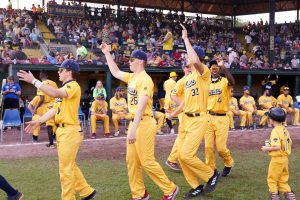 “One of Quinn’s things that he did almost everyday because he was one of the relief pitchers was he was a part of the fan wall. He was in charge of shaking hands, greeting people into the stadium and getting them to sign our right field wall. I think those consistent interactions with people, I think we started to see more and more of what Quinn can be.”

The atmosphere that the Bananas have created allowed for players to break out of their comfort zones. They danced and mingled as teammates during games or practices. They all started to bond with that one main test of being out of their normal routine. They formed experiences together that will last a lifetime and Mason found that in Cunningham.

Similarly to Mason, Cunningham’s love for the game of baseball was dying. After a disappointing season with his former college UAB his baseball career neared an end. As Cunningham packed up his belongings to go home for the summer, the phone rang with an opportunity to play baseball for the Bananas.

“The coaches at the Bananas and all the workers knew that I was burnt out and after the summer I was super fired up about baseball again,” Cunningham said.

Cunningham maximized his opportunity to close for the Bananas. He found a niche in the ninth-inning, and finished the summer with 17.1 innings pitched, 33 strikeouts, allowing a mere 11 hits and a 2.59 ERA.

The following that the team has corralled has grown as the team has played. The social media presence grows by the day. But the collegiate players from the 2021 summer CPL season are all playing for their respective colleges.

Mason off the field said he re-found his love for the game and his skills on the field improved as well. He now takes every chance he can get on the mound and attacks it with no fear and just to have fun with his teammates. Moreau said he saw how Mason transformed across the summer.

“He had some growing pains but by the end of the summer he had gotten himself a start and started getting used earlier in games and that was a thing, if we were able to find that rhythm he was going to be electric.” Moreau said. “So he went from having these fast [velocity] velo ranges to getting more consistent and finding his identity as a pitcher,” 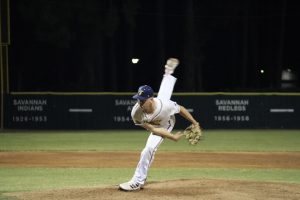 This season Mason said he understood that any opportunity gave him the ability to play more baseball. In his limited appearances on the bump for Nebraska this season, he’s pitched 1.1 innings pitched in three appearances and has not allowed a run.

“Last season I had a lot of pressure on me that I put on myself,” Mason said. “I wanted to prove a point that I was good enough to pitch, I pitched my freshman year and I put so much pressure on myself. And I think going to Savannah really changed my mindset into thinking that I don’t have to do that to myself and no this year it is just go out there and play.”

Mason said he knew the opportunity with the Bananas was a risk. He never imagined a summer in Georgia with an unconventional team would make the game fun and rekindle his love for baseball again.