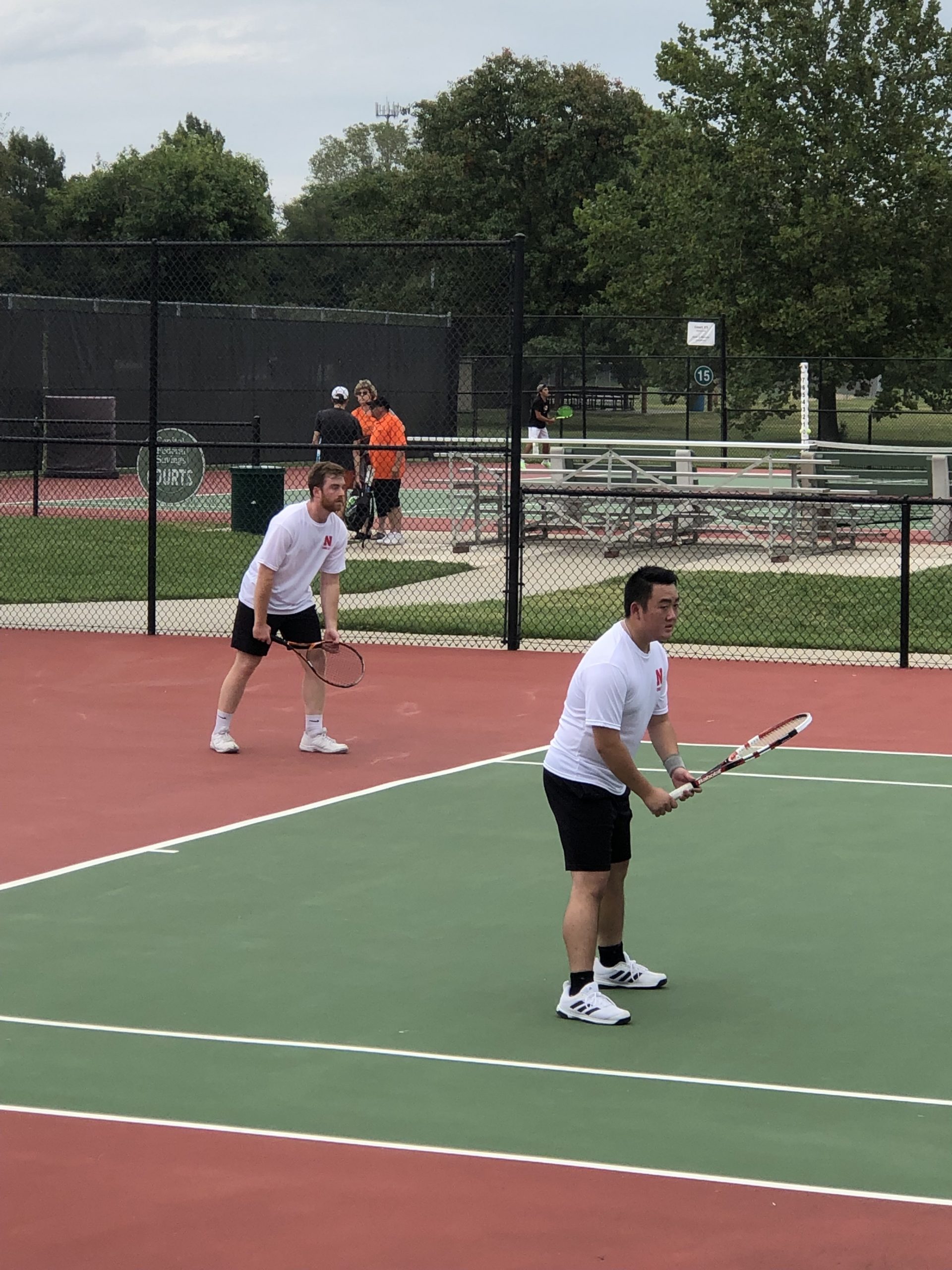 When Tim Duval began attending the University of Nebraska-Lincoln, he didn’t imagine himself participating in club sports. Now, he’s in a leadership role at the tennis club and has no regrets.

Duval, a senior psychology major, has been part of the tennis club since his freshman year. Last spring, he was voted by club members to be their secretary, which involves communicating with all the club members, mainly letting everyone know when and where club meetings will be held. He also helps with recruitment and planning.

“Tim does the work required of him and then some, for sure,” UNL Tennis Club President Jianyu Jia said. “I never hear any complaints from him.”

Recruitment is a critical part of any club sport. There is no club without its members, so Duval said he treats recruiting seriously in order for the best new people to join. UNL holds events every year where many clubs set up booths so they can talk to anyone interested in joining.

“If someone’s interested in joining, they will come up and talk to us,” Duval said. “We will ask them some questions about themselves and their skill level and then get their contact information so we can let them know when practice is.”

The UNL Tennis Club meets every Thursday during the school year from 6:30 to 8:30 and travels to compete against other tennis clubs throughout the school year.

“The trips are my favorite part of tennis club,” Duval said.

The tennis club meets serve a few different purposes, for those looking for a relaxed setting, as well as those who are competitive.

“We balance out fun and competition,” Jia said. “At competitions, we will try our hardest, and train and prepare before them because we want to win. I still make sure people relax and have fun,” he added.

Tennis club competitions are generally played as doubles, meaning there are two people on each team. Duval has played with the same doubles partner, senior Casey Lasater, since he started competing.

“Through practice and competing in tournaments, we discovered that we play really good together,” Lasater said.

Tennis club competitions are team-oriented so it’s essential that partners have good chemistry. Every match is played with a partner, and the final score is based on how well the team does as a whole. By using this tournament style, teams are required to have elite chemistry in order to succeed.

Duval said he understands this and has made the tennis club as team oriented as possible. Many students use club sports as a bridge to simply meet new people. The tennis club is no exception. Its members have formed a tight-knit group. When Duval joined, he said the club aimed its focus on competition and wins. Since then, the club’s leadership has shifted its focus.

“Our leadership has gotten more people-oriented,” Duval said. “We want our members to have good relationships.”

The tennis club is open to beginners. Generally, members play matches with and against each other. A portion of practice involves activities where everyone is involved in the same game competing against each other, which strengthens the entire group’s chemistry.

“Our practices aren’t very intense,” Reid Marco, a member of the tennis club said. “It’s very beginner friendly. We like to have fun and crack jokes.”

Duval has a long history of playing tennis, beginning in the third grade.

“My mom took me to the courts one day and I was instantly hooked,” Duval said. “I found it extremely satisfying to simply hit the ball back to the other side.”

Duval played high school tennis at Shawnee Mission East High School, just outside of Kansas City. He chose the University of Nebraska-Lincoln to further his education, not his tennis career.

“I looked at a lot of Kansas schools, Mizzou, Arkansas, and Drake in Des Moines but I liked this campus and the people here,” Duval said. “Plus this was the best scholarship I got,”

At the start of his time in Lincoln, he said he looked for a way to get involved. While at a club fair, Duval came across the tennis club booth. Having experience and a liking for tennis, he decided to join. Duval has attended ever since, to continue his tennis passion and be part of an inseparable community.

“I was on the fence about joining tennis club, but I just did it and definitely don’t regret that decision,” Duval said.

“Don’t be afraid to jump in. The worst that can happen is they turn you away or you don’t want to go again. It’s worth it to try, because you could meet some lifelong friends.”

Duval said members are able to stay active while being part of a fun community. Club sports can impact students’ lives in several ways. Aside from just playing sports, and hanging out with people, there are valuable lessons to be learned from being part of a club.

“I learned how to work as a team,” Duval said. “I met a really great group of people and we all help each other do better. I want to keep that sort of encouraging mindset throughout life whether it be at work or with friends or family.”