The Brewers and Cubs were playing the first game of a four-game series.  September baseball had just begun. With 25 games left in the season, the Brewers were five games behind the Cubs for the NL Wild Card spot, and 7.5 games behind the Cardinals for the NL Central division lead. The Brewer’s playoff hopes were quickly fading. The Brew Crew would lose again that night, 5-10.  According to FanGraphs, a popular baseball statistic website, the Brewer’s playoff chances were now nearly at a dismal five percent.

The Brewers would win the next three games against the Cubs and traveled to Miami to take on a bad team in the Miami Marlins. Their hopes began to lift as did their playoff odds. They were up to 22.6% to make the playoffs after the series with the Cubs was over. Momentum was high, but their hopes were about to be dashed again.

Christian Yelich suddenly went down in a heap of pain. He fouled a slider onto his kneecap at the top of the first inning during the second game of a series against the Marlins. The crowd and both dugouts were dead silent. Yelich was a former Miami Marlin playing the first five years of his career there. He was also the MVP of last season and a nominee for this year’s MVP. Yelich had transitioned from a teen to a man during his time in Miami’s organization and had gone through events like the tragic death of star teammate Jose Fernandez back in 2016.  Later that night, Yelich was diagnosed with a season-ending injury, a fractured kneecap.

Yelich fractured his kneecap on Sept. 10. The Brewers clinched a playoff spot 15 days later on Sept. 25 with the odds stacked against them. How does this happen?

The 15-day period after Yelich’s injury was full of highlights and smiles, but the people the fans forget? Relief pitching.

Before Yelich’s injury, the Brewers had a relatively weak bullpen outside of all-star closer, Josh Hader. Using xFIP, or Expected Fielding Independent Pitching as our key performance indicator (KPI), Milwaukee’s bullpen was slightly below average when in comparison to the rest of the MLB. Keep in mind xFIP doesn’t resemble actual stats but rather EXPECTED normalized stats given factors like how hard the ball was it. 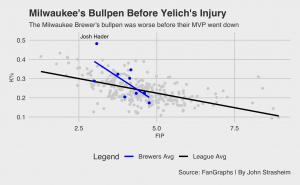 During the 15 days after Yelich’s injury, Milwaukee’s bullpen performed like some of the best pitchers in the league. Drew Pomeranz, a trade deadline acquisition from the San Francisco Giants, didn’t allow a single run. Moreover, his xFIP was NEGATIVE, meaning that our formula expected Drew to allow NEGATIVE runs, which is impossible. Similarly, Freddy Peralta’s xFIP was nearly ZERO. The Brewers also saw the return of starting pitcher Brent Suter who had missed the entire season due to Tommy John surgery from the prior season. In comparison to the rest of the MLB, Milwaukee’s bullpen as a whole grossly outperformed the remainder of the MLB during this 15-day time frame. 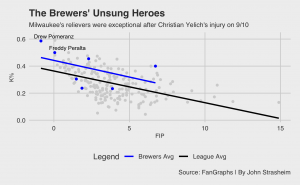 As a whole, Milwaukee’s offense performed worse after Yelich’s injury; this is why the contributions from the relief pitchers were critical in the success of the franchise during this period. Yelich’s stats from the year highlight why he could even win the MVP award for the second straight season. His contributions for the team pulled them to a slightly above average hitting team, using wrC+ and batting averages as the key performance indicators. These contributions were made in spite of Travis Shaw’s historically bad offensive season that pulled Milwaukee’s overall trend line down. More about wRC+ can be read HERE. 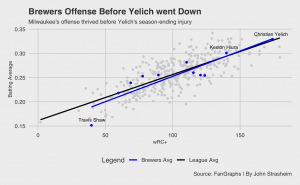 While the Brewers as a whole underperformed on offense without their MVP, they still received increased production from other sources. Rookie Keston Hiura continued to hit the ball well as he did before Yelich’s injury. Meanwhile, Ryan Braun, another former MVP on Milwaukee’s roster, began to hit again like an all-star caliber player. His clutch home runs highlighted his performance during this time frame. Contributions from other unlikely sources like Cory Spangenberg and Trent Grisham from Milwaukee’s AAA team in San Antonio played pivotal roles in the September run as well. 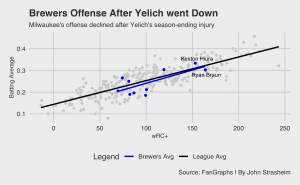 Baseball is a crazy sport. When it’s all said and done, there’s only a certain extent to which stats can predict the game of baseball. After all, the Washington Nationals just won the World Series going through a similar comeback story to the Brewers. The Brewers got eliminated in a one-game wildcard playoff to these same Washington Nationals, despite leading the game 3-1 going into the bottom of the eighth inning with Milwaukee’s star closer, Josh Hader, coming in to pitch.  Hader would later give up three runs in the inning, partially due to losing control of his slider, and the Brewers would lose 4-3. All of the statistics and probabilities gave the Brewers a high chance of winning in that scenario, but that’s the great thing (and not-so-great for Brewer fans) about sports. You never know where a slider down the plate can lead. For the Brewers, that slider led to their MVP fracturing his kneecap. For the Nationals, it led to three runs and an eventual World Series ring.