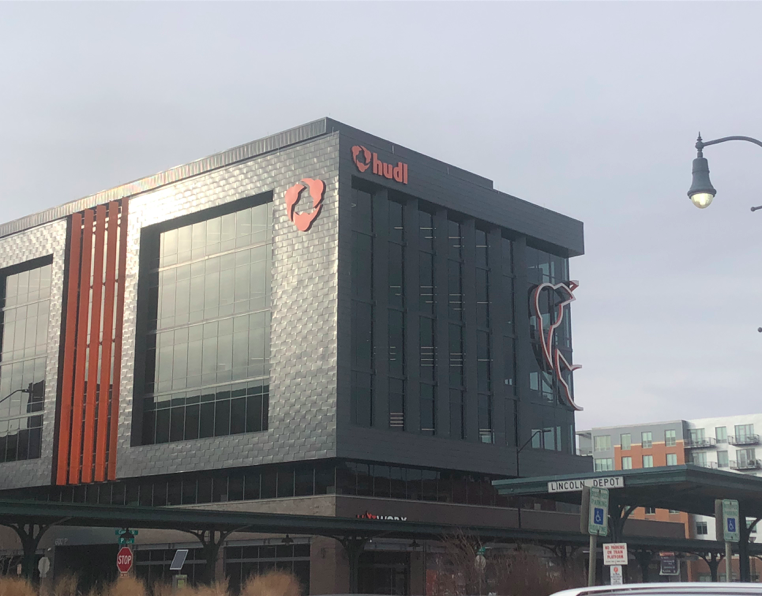 Based in the Haymarket District of Lincoln, Hudl was founded by David Graff, Brian Kaiser, and John Wirtz. Today, over 180,000 sports teams across the world ranging from youth to professional levels use Hudl to elevate their performance. With the use of their products and website, teams are able to review their game footage along with opponents’ footage. Additionally, recruiters are able to review and monitor prospects’ game film.

The Hudl focus camera is a robust, yet simple device that captures high-quality video and uploads it to Hudl’s website instantly for review. It allows teams to capture every game, practice, and scrimmage automatically. Teams can add their upcoming schedule to the app used with the camera. The camera will then begin recording 15 minutes before a scheduled game. It has default recording times based on the sport it’s capturing. Teams can extend or stop the recording via the Hudl Focus app. The camera is completely synced to Hudl uploading the footage to the team’s video library live as it’s recording.

“Automatic capture is one way we can help get our user’s videos uploaded to a library as quick as possible so users can review footage right when they get home,” Hudl tech support representative Jadyn Harding said.

“I like how simple it is. All it takes is the click of a button on my phone,” Pius X basketball coach Ryan Psota said.

The Hudl Focus camera has ball-tracking technology, which allows it to follow the ball the whole game. It’s a feature that works perfectly for high school teams who might not be able to find a reliable cameraman.

“Hudl focus eliminates some of the variables,” Saint Ignatius College Prep athletic director, Tony Harris said. “Shaky cameras, tripods that fall, conversation in the stands that distracts, any of that. It creates a platform that gives us a standard shot that is solid, a good shot all the way through. And we know we’re going to get good footage. To add to that, you eliminate any of the human error, in that you might have a manager who is not as adept at technology or doesn’t know the camera or was home sick, any number of things. It just gives us some reliability.”

Once it’s set up, it doesn’t need to be messed with. This takes away several variables that can destroy footage. Teams no longer need to carry around clunky tripods and cameras to every game or get a 10-year-old kid to record on an iPad. It eliminates human error.

Using the camera comes with a price which will vary. The camera alone costs $3,000 but is typically discounted for schools. Additionally, Hudl requires teams to purchase a yearly package that will allow them to store and review video. For high school teams, price varies from $900-$3,300. It might cost upwards of $400 to install the camera if a school wants to hire someone to do it. However, schools have the option of installing it themselves for free. The Hudl Focus app has videos showing how to install it step by step.

“The only negative part about Hudl is the price,” Psota said. “But if your school district can afford it, it’s worth the cost. Its simplicity makes our jobs easier.”

When Covid-19 hit, fans were unable to attend games so Hudl implemented another feature. The company allowed its focus cameras to livestream events and games.

Schools are even able to make money off of streams. They can charge a fee to watch the stream or make it free. They can also allow donations.  Because of the ongoing pandemic, many schools have not allowed fans to attend games. Now, they’re able to watch the game from home since high school games are rarely televised.

Hudl continues to show why it’s one of the most used sports analytics company in the world. The focus camera adds to its list of products that help teams win.