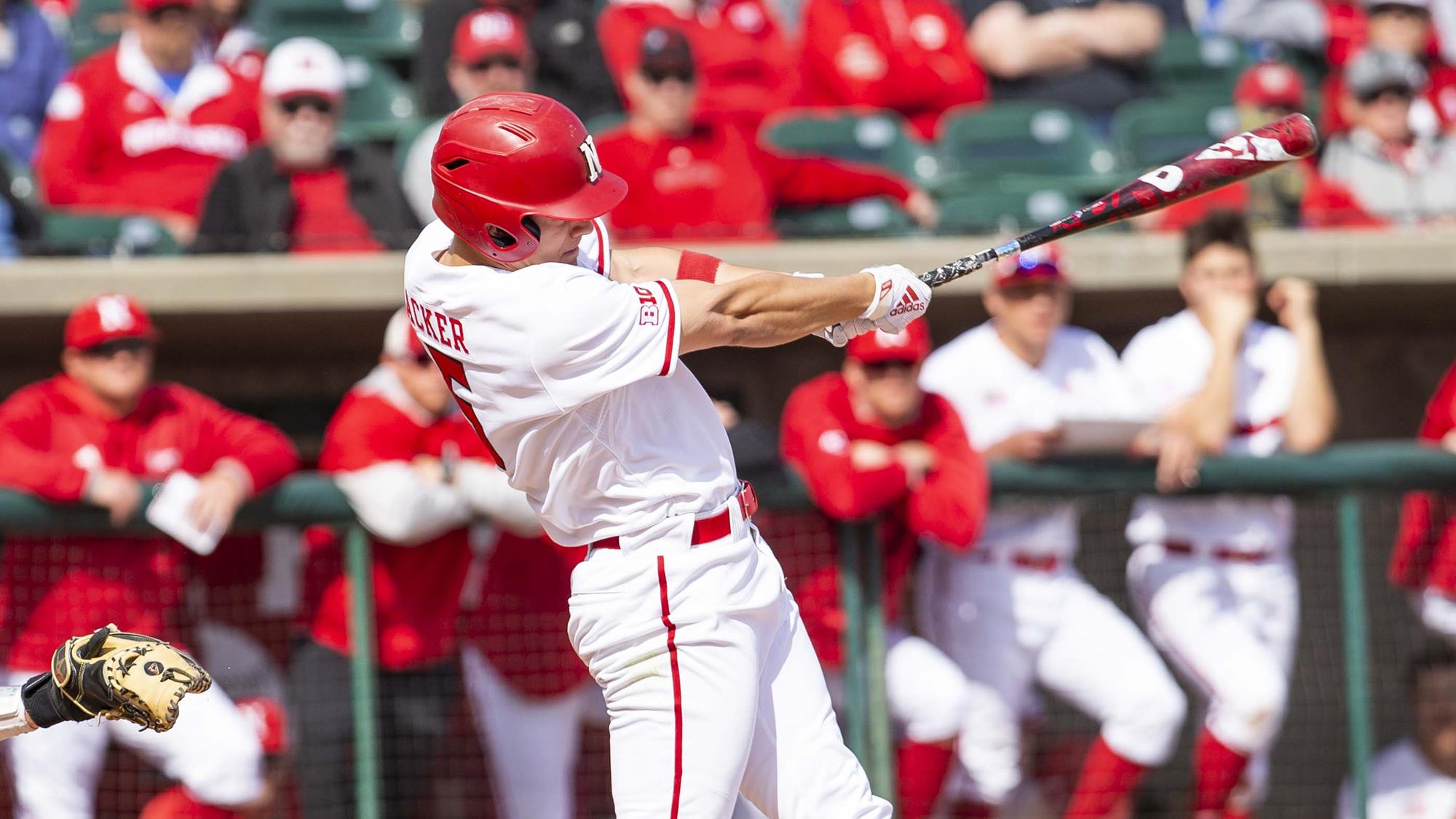 Joe Acker is a senior on the Nebraska baseball team this season and he has seen all the highs and lows that have come with his career over the course of the past three years. From winning the Big Ten regular season title, finishing dead last in the conference to playing in the Big Ten tournament championship, he’s been through it all.

For his last season, though, the most important thing to him is enjoying his time he has left on the field with his teammates.

Acker’s days on the field started early, specifically when he was about three years old playing in an under four YMCA league in his hometown Waukesha, Wisconsin. From there, Acker played baseball every year, but it wasn’t until his freshman year at Marquette high school when he realized he would be playing for even longer.

“It was freshman year of high school when I made varsity,” Acker said. “That was when I realized this was something that I was going to pursue down the road. You don’t even think twice about going to play Division I baseball if you have the chance.”

His chance to play Division I baseball at Nebraska may have begun in the summer of his sophomore year of high school when former Nebraska baseball head coach Darin Erstad saw him play for the first time. However, it wasn’t until his junior year when he actually heard from somebody on Nebraska’s staff.

“They went to see Alex Henwood who was committed at the time and I was playing up in a tournament in Iowa with his team that I did well in. Ted Silva, the old assistant pitching coach, called my cell later that night,” Acker said.

While Nebraska wasn’t necessarily the best baseball program that showed Acker interest in high school, they were definitely the best that offered him. Also, the fact that Acker played in the outfield and Nebraska’s head coach at the time was a star center fielder and World Series champion played a big role in his decision. It also helped that the university in his home state, Wisconsin, didn’t have a Big Ten baseball program.

“Growing up in Wisconsin I wanted to play for them, but obviously they don’t have a Big Ten team and the school I found the most similar to Wisconsin was Nebraska, so it was a no brainer to me,” Acker said.

When he first arrived on campus, Acker soon realized that he wouldn’t be playing much because it’s extremely difficult to play right away for a power five school as freshman. He then learned that what he needed to do was learn as much as he could, and Nebraska had just the starting center fielder to help him do so.

“My freshman year I was behind Jake Meyers and the staff made it clear that I needed to soak up as much information from him as I possibly can,” Acker said. “When they made it clear it was a year for me to learn as much as I possibly could, that’s when I gained a lot of weight in the weight room and developed my swing because I wasn’t so much behind defensively but more the offensive game. Coming from Wisconsin was a big jump from high school to college.”

Meyers was named to the all Big Ten first team in the 2017 season and now is in the Houston Astros organization. Another person that Acker looked up to was fellow Wisconsin native Scott Schreiber because of the way he carried his business on and off the field. Schreiber was named to the second all Big Ten team in 2018.

After sticking it out the first two seasons as a Husker, Acker eventually won the starting spot in center field his junior year. Acker played in 46 games starting in 44 of them and was a big part of the teams success in the 2019 season. Acker finished the season with a .260 batting average, 20 runs batted in and 25 runs scored.

“I was happy that I won the job at the beginning of the year and I was owning my role on the team, at one point hitting close to .360, but once Easter came around I started lining out. Even though I was taking even better swings than I had been earlier in the year, my average was dropping and I started to press a little bit,” Acker said.

Still, Acker said he was able to contribute in big ways to help the Nebraska team make a run at the end of the season during the Big Ten tournament as he started to hit well again. Nebraska made it all the way to the Big Ten tournament championship at the end of the 2019 season against Ohio State, but fell short 3-1. The feeling of being so close didn’t kick in right away for Acker.

“The best way I can describe it is that it was surreal, but after it happened … The season just goes by so fast I couldn’t even process we were in the championship,” Acker said. “I remember sitting down around two weeks after we lost and it sunk in that we came so close and my freshman year we won the Big Ten season regular title so I know what it feels like to kind of hold that hardware.”

After getting over the hard-fought loss in the championship, Acker and the Nebraska team had to be ready to go for the Oklahoma State regional. In the first game, they beat Connecticut and would only need to win one more game against Oklahoma State to play in the regional final.

However, two outs away from the regional final, Nebraska wasn’t able to get it done as Oklahoma State would win the game in the ninth inning and would go on to advance to the super regional. This was especially tough for Acker because he knew what his team could have done if they got that shot in the regional final.

“There is no doubt in my mind we would have beat Connecticut or whoever the next day and gone to a super regional and who knows where we could’ve gone from there,” Acker said. “I’d say it really took a solid month for it to really sink in how close we were but now obviously we’re just thinking about the present.”

The present for Acker includes a .306 average and 12 runs scored already. Also, after the first home series win of the Will Bolt era against Columbia, Acker was named the Big Ten player of the week for the first time in his career.

“Obviously it’s an awesome honor to receive the award because some really talented guys in the past have won the award week to week so it is big, but at this point it really doesn’t mean anything in the game of baseball because I’ve felt it all,” Acker said. “This week I can be the Big Ten Player of the Week, then next week you don’t know what’s gonna happen so it’s just kind of riding the roller coaster.”

Part of his early success is credit to the experience he has as a senior on the Nebraska baseball team, but a lot of it is because of the change he made to his swing and his knowledge of his role in the offense this season.

“I think my swing from last year to this year is completely different because that’s what I worked on in the off season and it’s really transformed completely so I definitely think that has a lot to do with it, but to answer why I’ve had success it’s because I know my role on the team,” Acker said. “It’s not to hit 20 home runs. It’s to do everything like sac bunt, drive a guy in, single and luckily I’ve had the occasional home run this year and a couple doubles.”

Not only has Acker had the occasional home run this year, but he hit his first home run of his career. In the third game of the second road series of the season against top 15 ranked Arizona State, Acker put a charge in one to left-center field in a big win for Nebraska.

“Honestly I knew it was a breaking ball and I knew I hit it pretty good to left center but I had no idea if it was gonna go out or not, so it was a good feeling to say the least,” Acker said. “That goes back to the change I made in my swing to be able to hit home runs on accident almost where as last year my swing was very downhill and there wasn’t a lot of launch angle to it so hopefully there’s more to come.”

Along with more to come from Acker there is more to come from the Nebraska baseball team as a whole as it didn’t get off to the start it was hoping for this season. According to Acker, the team came into this season with the utmost confidence in themselves and started off the season in a dominant fashion beating Baylor 19-9.

After the dominating performance on opening night, Baylor walked Nebraska off in the 10th inning of a game that Acker says they should have won. Instead of leaving Wacco with a 2-1 record and a series win, the Nebraska baseball team went on a seven game losing streak. During this streak, Nebraska lost three straight games by a combined total of four runs, but this came against an extremely tough schedule.

The losing streak didn’t end until the game against Arizona State when Acker hit his first home run.

“It was a gut check that Sunday. We’ve lost like seven in a row at that point so we were like ‘Hey, it’s now or never.’ These games are going to matter come the end of the season when we’re trying to make a regional or trying to bump up our RPI, so we came out guns blazing,” Acker said.

Since the Arizona State win, Nebraska has won six of its last seven games. Acker and his team are looking to keep the winning going and he knows exactly what they need to do as a unit to keep moving forward. That is dominating all three phases of the game, which Acker believes they have not done in most of their games thus far, and just competing for their teammates rather than worrying about their own personal performances.

“When you worry about your teammates and competing, the game becomes a lot easier and it slows down a little bit for you. If we can do that, I know that with the talent on our team we’ll be able to put ourselves in a good position to make the postseason and as we know anything can happen there,” Acker said. “As far as making the supers or to Omaha, none of that is out the door.”