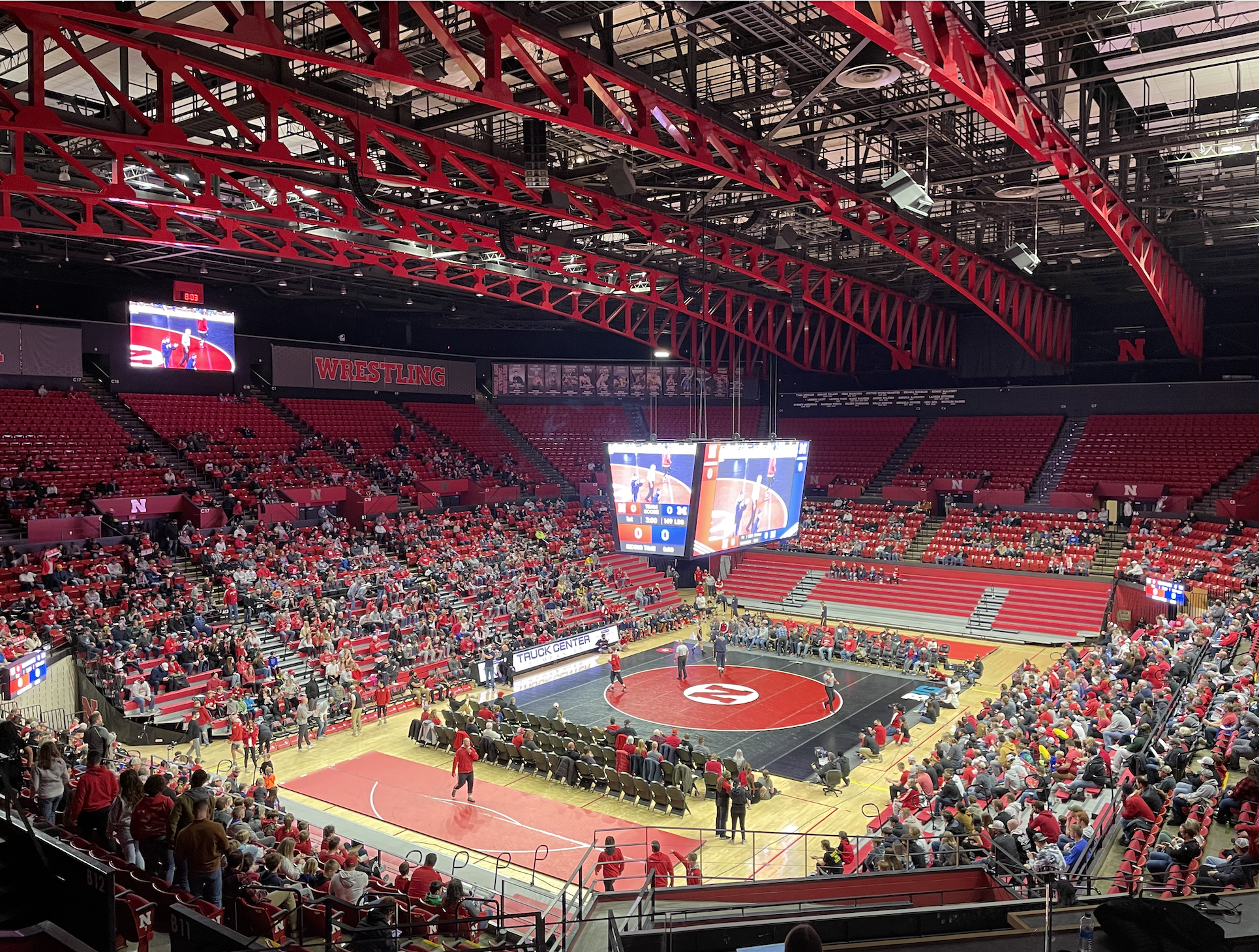 Third-ranked Michigan pulled away in the late stages of its wrestling dual with 8th-rated Nebraska Friday night for a 20-13 win over the Huskers.

It was a back-and-forth battle throughout the match at the Bob Devaney Center in Lincoln. The Wolverines won three of the last four matches.

The dual began with the 149-pound weight class. No. 8 Ridge Lovett, a sophomore from Nebraska, took on junior Pat Nolan of Michigan. With 2:30 left in the first period, Lovett earned a takedown to go up 1-0.

Nolan got two escapes in the 3rd to make it 8-3. With 14 seconds left in the match, Lovett got another takedown and was rewarded a point in the end for riding time to win by major decision 11-3.

Then it was the 157-pound weight class with No. 5 Nebraska sophomore Peyton Robb going up against Michigan’s No. 13 Redshirt Junior Will Lewan. In the second period with 1:53 left, Lewan got the escape to go up 1-0.

After Robb got an escape with 1:55 left in regulation, the match was tied 1-1. It would head into overtime and with 1:11 left, Nebraska threw down a challenge. The Huskers did not get the takedown call, but with just 37 seconds left Lewan did get a takedown to secure the 2-3 victory and cut the Husker lead to 4-3 in the dual.

The 165-pound weight class featured #29 Nebraska freshman Bubba Wilson taking on Michigan’s #12 ranked, sophomore Cameron Amine. With 1:36 left in the first period, Amine got a takedown. Just seconds after Wilson got the escape to make it 2-1.

Just 5 seconds into the final period, Amine got an escape to tie the match at 3-3. Wilson ended the match with 5 seconds left as he got reversal to secure the 5-3 victory that put the Huskers up 7-3 in the dual.

In the 174-pound weight class No. 5 sophomore, Mikey Labriola of Nebraska faced senior Logan Massa of Michigan. In the second period, the first points were scored with 25 seconds left as Labriola got an escape.

When there was 1:47 remaining in the match, Masa got an escape to tie it at 1-1. With Under 20 seconds to go Masa got a takedown and an extra point for riding time to win the match 4-1 and cut the Nebraska lead to 7-6.

Next was the 184-pound weight class with Nebraska senior Taylor Venz against Michigan senior Myles Amine. With 1:54 in the first period, Amine got the takedown to go up 2-0 and gain the only points of the period.

The 197-pound matchup began with No. 3 Nebraska’s senior Eric Schultz and Michigan senior No. 10 ranked senior Patrick Brucki. In the first period, Schutz got a takedown and an escape to go up 3-2.

With one minute left in the match, Schultz got another takedown to make it 8-4. With 41 seconds left Brucki got an escape to make it 8-5 but that would not be enough as Schultz earned the 8-5 victory to put the Huskers up 10-9 in the dual.

Next up was the heavyweight division with Nebraska’s senior, No. 12 Christian Lance taking on Michigan’s senior, No. 3 Mason Parris. After a scoreless first period, with 1:53 left in the second, Parris got the escape to score the first point of the match.

As the third period began the match remained 1-0. With just 37 seconds left in the match, Lance was rewarded with an escape to tie the match 1-1. Just seconds later, Parris got a takedown and an extra point for riding time to get a 4-1 win to put Michigan up 12-10 in the dual.

In the 125-pound match up it was the Husker freshman Jerimiah Reno vs the Wolverine senior, Jack Medley. With 1:52 left in the first period, Medley got the takedown to go up 2-0. With 1:11 left Reno got an escape, but right after Medley got a takedown and a 2 point near fall to make it 6-1.

Medley continued to dominate as he went up 16-5 after two periods. Reno got a quick escape to make it 16-6 just seconds into the 3rd period but Medley ended up winning the match 24-8 with a tech fall to put the Wolverines up 17-10.

In the 133-pound matchup, Nebraska’s freshman Dominick Serrano from Nebraska faced No. 8 freshman Dylan Ragusin from Michigan. In the first period with 1:34 left Ragusin got the takedown to go up 2-0.

Serrano tied the match with his second escape in the second period.

Just 7 seconds into the 3rd, Ragusin got an escape to go up 3-2. With just 5 seconds remaining, Ragusin was rewarded with another takedown and an extra point for riding time to with the match 6-2 to put the Wolverines up 20-10.

In the final matchup of the night, it was the 141-pound weight class with Nebraska’s senior, No. 8 Chad Red Jr. Taking on Michigan’s senior, No. 4 ranked Stevan Micic. With 2:10 left in the first, Red was rewarded with the takedown to go up 2-0. With one minute left, Micic got the takedown to go up 3-2. With 20 seconds left, Red got an escape to tie the match at 3-3 to end the first period.

With just under a minute left in the match, Red got a takedown to go up 6-3. Red also got one point for riding time for the 7-3 victory to make the final score 20-13 to end the dual.

The Huskers took on No. 1 ranked Penn State Sunday.