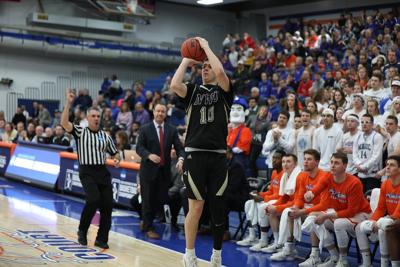 In his senior season, Nate Schimonitz became the sixth Nebraska Wesleyan men’s basketball player to be named a Division III National Association of Basketball Coaches first-team All-American. Schimonitz is third on the all-time scoring list in the team’s history, and in his last game as a Prairie Wolf, he became the university’s third member of the 2,000 point club.

Schimonitz’s college basketball journey began his freshman year after he chose Nebraska Wesleyan over Rockhurst due to its coaches and desire to stay close to his friends and his home in Omaha, Neb. When he arrived at Wesleyan, Schimonitz did not realize he was going to be a four-year starter.

“I didn’t know going in even before our first scrimmage. None of us really knew because coach never told us,” Schimonitz said. “He just ended up starting three of us freshmen, so it ended up being a fun experience, and it definitely helped with our chemistry down the road.”

Schimonitz started in 25 out of 26 games during his freshman campaign, averaging 19.1 points per contest. Becoming Wesleyan’s all-time leading scorer never really crossed his mind, but it became impossible to ignore after his successful freshman season.

“Once you get to sophomore and junior year and start to show up on a couple charts with a year or two left, that’s when you kind of start realizing you have a chance to do it,” Schimonitz said.

However, a torn meniscus in Schimonitz’s sophomore season forced him to miss 10 games. Not only did he miss out on scoring points in these games, but Schimontz said there were also games after he recovered where he did not score as much as before his injury.

Still, Schimonitz overcame his injury through rest and physical rehabilitation and was able to start in 21 of Wesleyan’s 33 games this season.

Winning a national championship wasn’t even on Schimonitz’s mind until an upset win in the Elite Eight of the Division III NCAA men’s basketball tournament that season.

“We beat the number one team in the country by like 30 or 40 to go to the Final Four,” Schimonitz said. “So, at that point, we kind of figured any team we played at that point, we felt pretty confident against.”

While winning a national championship was crazy and fun in itself, what made it so memorable for Schimonitz was that they didn’t play a single tournament game at home, which even became an advantage for them down the stretch.

“The run was crazy and different because we didn’t get any home games the whole way,” Schimonitz said. “That meant there were a lot of trips in a row and all of the games were a lot of fun because we were all in the tournament for the first time,” Schimonitz said. “The whole experience was new, and pretty much going on the road all the time helped us bond a little more and build team chemistry that helped us go to the Final Four and win it.”

Most basketball players play their entire career without winning a national championship, so with Schimonitz winning one with two years left in his career, there was certainly added pressure on him and the team to defend its title. It also made it much more difficult because now everyone throughout the country in Division III knew who Nebraska Wesleyan was.

“We started off really well and I think we had the longest active winning streak in [Division III] until we lost. There was definitely a little more pressure because everyone at that point knows who you are, especially on the non-conference side, because the teams that saw us our freshman year probably didn’t think much, but after that sophomore year everyone had us circled on the calendar,” Schimonitz said.

Unfortunately, Schimonitz’s junior season did not end in another championship because Wesleyan lost at home in the second round to the University of Saint Thomas. It was very disappointing for Schimonitz, but the end of his third season as a Prairie Wolf was not the worst part.

“This year was worse obviously being a senior, but that really hurt a lot especially losing at home,”Schimonitz said. “I definitely feel like our junior year was probably our most talented group because we were all older with our junior and senior classes. I think that was our best team in my four years, so it was definitely disappointing, but seeing the seniors’ career end that I had played with my whole career made it the worst for sure.”

Heading into his senior season, Schimonitz’s expectation for the team was obvious because once you’ve won one national championship, that becomes the goal year in and year out. However, Schimonitz had a personal goal of proving people wrong and doing something he had never done before in his career.

“I’d say for myself, I wanted to be an All-American by the end of the year especially because the [Division III] hoops people didn’t put me on any preseason lists,” Schimonitz said. “I wanted to prove people, like them, wrong and to try to become an All-American for the first time in my career.”

Schimonitz also kept his eye on the Nebraska Wesleyan all-time scoring list, knowing he had to have an incredible season after his injury early in his career set him back. He also had his sights set out for the 2000th career points mark.

“I thought there was a little chance. I would have had to have a heck of a year and we would’ve had to make a deep run in the tournament,” Schimonitz said. “But most likely I knew since I had gotten hurt especially my sophomore year there probably wasn’t a great chance of that but I knew there would be a good chance of me getting to 2,000.”

Schimonitz achieved his goal of becoming Wesleyan’s sixth first-team All-American and was even able to score over 2,000 career points, scoring 2,001, which ended up being third all-time in Wesleyan men’s basketball history. Still, personal records and accolades were not what was important to Schimonitz throughout his career, but his teammates and his team’s success.

With one game left to advance to the NCAA tournament, Schimonitz suffered a hamstring injury in the American Rivers Conference championship and was unsure if he would be able to play in the NCAA tournament and definitely would not be 100 percent in the first few rounds.

“The feeling was disappointment, mainly because the game was over at that point. I mean, we were gonna win,” Schimonitz said. “Also the fact that it was the hamstring … I had dealt with the same thing last year so I knew with the pain right away that it was gonna be a long shot that I would get to play in the first two rounds of the NCAA tournament, at least not at my best.”

Still, with the amount of confidence Schimonitz had in his teammates and a home-court advantage, he still believed he could leave Wesleyan with one more national championship banner to hang in the Weary Center.

“I definitely did think there was still a good chance if we could get through that first weekend at home then I could’ve come back next week and been pretty close to 100 percent. So that was for sure the hope going into the tournament,” Schimonitz said.

After sitting out the first-round victory against Webster University, Schimonitz was needed in the second round game. He made it to the court, but in a different role as he came off the bench playing 18 minutes, 15 less than his season average.

This and a few other reasons caused Wesleyan to come up short in a lopsided game against Washington University in Saint Louis, ending Schimonitz’ career along with a handful of other seniors who played an important role in Wesleyan’s men’s basketball team..

However, there was still something positive that came from this game even though it may not show up on the scoreboard. With one minute and 21 seconds left in the game, Schimonitz stepped to the free-throw line. With “MVP” chants echoing throughout the arena and 1,999 points under his belt, he knocked down both shots as he joined the 2,000 career point club.

“It was definitely a pretty cool moment, especially the way the game had been going because at that point in a blowout you almost start accepting the loss on the court so it doesn’t hurt quite as bad in the moment,” Schimonitz said. “I knew it was gonna be my last time playing basketball so that definitely felt satisfying and it definitely felt good to hear all of the fans still supporting us.”

After four seasons, a few injuries, 2,001 points, becoming a first-team All-American and a national champion, what Schimonitz cherishes most about his career at Nebraska Wesleyan is the people he got to meet and the relationships he built.

“Definitely all the friends I made, you know,” Schimonitz said. “I live with three guys who at some point played basketball with me in the past four years so creating those relationships and meeting all the guys was really special to me because we’ll all probably be friends for years.”