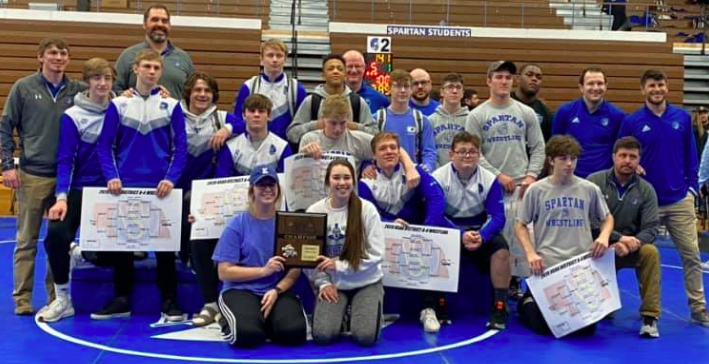 The top four wrestlers in each weight class from every district advanced to the state tournament to battle one another for a shot at the title. That means of the 99 wrestlers at Lincoln East, 43 of the athletes won’t participate.

Keith Smith of Lincoln East defeated Perry Swarm from Kearney High in a major 15-5 decision to lock up the first-place spot in the 106-pound weight class. Tanner Clanton of Millard North beat Kieran McGlynn of Elkhorn South 3-2 by decision to take the third spot. Smith, Swarm, Clanton and McGlynn all advanced to state.

Nic Swift of the 132-pound weight class added another district championship to the list for Lincoln East beating Elkhorn South’s Daniel Schuman in an 8-4 decision. Lincoln Pius X’s Luke Anders punched his ticket into the state tournament with an 18-6 major decision win over Korbin Arnold from Lincoln High.

Lincoln East sents its sixth guy to state and secured its fourth district champion with Breckin Sperling’s win over Kearney’s Gage Ferguson in a 5-2 decision. Elkhorn South’s Nick Groth edged out Brian Petry with a decision of 8-7.

Kearney also sent its sixth guy and locked up its fourth district champion in the 152-pound weight class with Gauge McBride rolling through his bracket and  coming out on top over Elkhorn South’s Ayden Welch in a 10-3 decision. Lincoln East’s Chase Kammerer beat Jackson Okereke of Lincoln High with a major 12-2 decision.

This will be the 4.5-star recruit’s fourth consecutive time in the tournament, and he will be looking to take home his third straight gold medal after taking silver his freshman year.

“Through his career, he has tallied up over 200 wins with a majority of them being pins,” Kammerer added.

Mayfield is nationally ranked 7th overall per The Open Mat. Although Mayfield has officially committed to Northwestern University, he did have Nebraska on the radar as he posted a picture of his top five schools which included Northwestern, Nebraska, North Carolina State, Pitt and Princeton.

The powerhouse of the Lincoln East Spartans wrestling didn’t stop there, either. Grant Lyman just pinned everyone and anyone in his way, including the runner-up out of Kearney High, Joshua Pierson, in the 172-pound weight class.

Spartans chalked up another win as Edward Lankas was Lincoln East’s seventh district champion of the night pinning Millard North’s Lucas Nigh 1:27 into the match. Mateo Benito-Garcia of Omaha South beat Elkhorn South’s Henry Thomsen by decision scored 7-1 in the 182-pound weight class.

In the 220-pound weight class, Mikey Vasquez had a considerable night being the first and only district champ from Omaha South, beating Kearney High Dario Rodriguez in a 2-1 decision.

And if you blinked, you might have missed the 37 seconds it took Lincoln Southeast’s Cody Genetti to pin Ben Uhl of Elkhorn South.

Twelve wrestlers from both Lincoln East and Kearney High qualified for the state tournament, which was the most among the eight schools in the A-4 district that wrestled at East High School on Saturday.

Millard North was next with nine, Lincoln Southeast had eight, Elkhorn South seven, followed by Lincoln High and Pius X, which both had three. Omaha South qualified two wrestlers.

The 56 qualifiers, four from each weight class, traveled to Omaha on Thursday, Feb. 20 to meet with the 56 qualifiers from the other three class A districts to determine the best 16 class A high school wrestlers in the state.