No. 6 Nebraska defeated No. 18 Hawaii, winning three sets (29-27, 25-22, 25-19) in front of 7,052 spectators in the Wisconsin Field House in Madison, Wisconsin. This game marks the twelfth meetup and eighth win between Nebraska and Hawaii. Nebraska’s victory put an end to Hawaii’s 13-match winning streak.

At the postgame press conference, Nebraska head coach John Cook spoke highly of Hawaii and the work they put in this season.

“They’ve done a great job, they have a great team. I was really impressed in just preparing for them, the talent they have and how they’ve used it all year,” Cook said. “They’ve had a great season, and so it was an honor to play Hawaii.”

Nebraska was behind in the first set, trailing with a margin of about two points the majority of the set. Nebraska took the lead for the first time in the set with a score of 25-24 after a service error and kill by junior outside hitter Lexi Sun, then took the final lead of the game with a kill by sophomore setter Nicklin Hames. The first set ended with a Nebraska victory, 29-27.

Cook believes the close first set was a driving factor in the team’s performance the remainder of the night.

“I think winning the close game in game one gave us a lot of momentum that got us game two and then it was a battle in game three, but I thought we made really good adjustments as the match went on,” Cook said.

“We pretty much shut down their middle attack which has been their kind of their bread and butter … I’m not sure those guys even had a kill in game two or three,” Cook said.

Junior middle blocker Lauren Stivrins believes it was the preparation and the risks her team was taking that led them to a strong finish.

“I just think we went back to the basics and we got really into it towards the end,” Stivrins said. “We were kind of slow to get started but I think just the way we’ve been preparing all week, kind of helped us get through that … we were taking big risks.”

When asked about her mentality in the first game going into the second, junior outside hitter Jazz Sweet said she considers her preparation and positive attitude to be her motivation.

“Just trusting my training, trying to give the energy to my team and that was through big reps,” Sweet said. “Just going up there and trying to swing high and get good shots so that was really my goal right there, to push us to the second set, win or lose, with some energy.”

Nebraska started out strong in the second set, taking the lead in the beginning with Hawaii committing several errors. Hawaii ended the game with 23 total errors and Nebraska with 10.

The remainder of the set was back and forth with Nebraska taking a big lead of 21-17 after a series of Hawaii attack errors. The second set ended with a final score of 25-22 after an attack error by Hawaii’s Skyler Williams.

Sun believes her team worked hard in being aggressive and working together to take on Hawaii.

“I think we were just attacking as a team, that was kind of our mindset going into it and we’re working with our serves and passing and hitting especially,” Sun said. “I think that all the hitters were all attacking tonight and I think that that really helped us out.”

Sun led the team with 14 kills, Jazz Sweet following shortly behind with 12 and Lauren Stivrins and Madi Kubik tied with seven. Hawaii led Nebraska in kills with 47 with Brooke Van Sickle’s 14 kills. 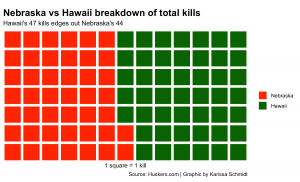 In the final set, Nebraska took the lead at the beginning with two Hawaii errors and a kill by Sun. Nebraska maintained the lead the entire set, with a final set score of 25-19.

Sweet and Stivrins led in blocks, each with three for the match, and Sun and Kubik each had 2 blocks. 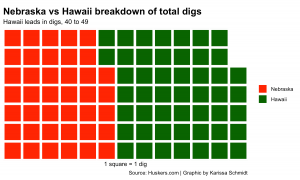 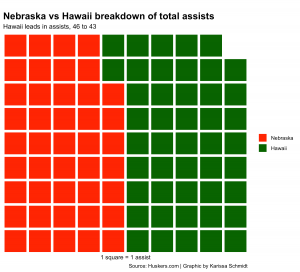 After this win, Nebraska now prepares to take on Wisconsin as they continue into the NCAA Regional Final. Stivrins plans to use previous losses to Wisconsin this season as a lesson for how Nebraska needs to change their play.

“We played them twice before and we’ve been so close both times and I think the reasons we lost in the previous games was because we weren’t attacking,” Stivrins said. “I think we’ve grown so much since then and I’m excited to see what our team can do.”

Going into the match, Cook tries to keep his team level minded and focused on the game at hand. He finds importance in focus on one game at a time due to the pressure of winning. Along with the win, Cook said that they benefited from the experience of playing in the Field House and the freshmen on the team experiencing a regional game.

“It’s over and done with if you lose, and, you know. Hawaii is a great team so this is a big win for us,” Cook said. “We know we’re gonna have to have great effort tomorrow night.”

Nebraska will face off against No. 5 Wisconsin tomorrow night at the Wisconsin Field House. A win will take Nebraska the NCAA Semifinals for the fifth consecutive year and sixteenth appearance in program history.