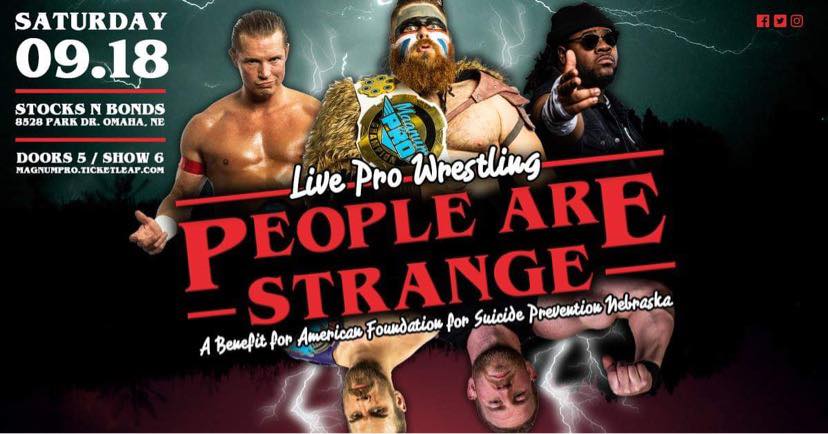 A crowd packed into an event center with energy radiating all around can feel like the best atmosphere imaginable for a professional wrestler.

But it could also feel like the loneliest place on Earth.

As a result, a wrestling promotion that operates largely in Omaha wanted to raise awareness for suicide prevention.

“I know it’s near and dear to a lot of their hearts,” said Magnum Pro Wrestling employee, Shad Moore, when referring to the organization’s feelings toward mental health and suicide prevention advocacy.

Magnum Pro Wrestling, a promotion started in 2011, is preparing for its upcoming fundraiser, “People Are Strange” on Sept. 18, to benefit the the American Foundation for Suicide Prevention Nebraska chapter and the Omaha Walk.

September 10 of this year served as World Suicide Prevention Day, and “People Are Strange” will serve as a reminder of the ongoing suicide trends. According to AFSP.com, 1.38 million suicide attempts were made in 2019.

Events like “People Are Strange” are trying to turn that tide.

Moore said he is appreciative that the organization has been able to develop tight bonds in the Omaha community while also growing its brand and influence.

“Magnum Pro is like a brotherhood,” Moore said. “The guys really want to be out there and send the crowd home happy, that’s what I’ve seen that sets them apart.”

Moore, in his fifth year with Magnum Pro, said he feels a show promoting mental health can provide a unique platform for all involved.

“Just putting the name of the American Foundation for Suicide Prevention out there alone is helpful to where people can get more information,” Moore said. He lost two colleagues in the past year to suicide.

“It’s amazing to be on the production side and see the people’s reactions to the characters that are in front of them,” Moore said.

Magnum Pro comes from humble beginnings, founded and operated by Nathan Blodgett, who goes by the ring name, Jaysin Strife.

“I realized that the Omaha and Council Bluffs area was lacking a quality, business-minded promotion,” Strife said.

Now, almost 10 years later, the promotion continues to expand and see consistent attendance growth. Strife attributes this to the passion from the community but also how he runs the operation internally.

“I’m particular about the people I bring into the locker room because we’ve always had that family atmosphere,” Strife said.

Magnum Pro regularly runs shows that act as fundraisers for various local Omaha organizations. “People Are Strange” will be the first for the benefit of AFSP.

“The community has given a lot to us, so I never have a problem giving back,” Strife said.

Strife is aware that the professional wrestling industry has some negative associations with mental struggles, but he is optimistic about what the industry can do for mental health.

“Wrestling has an unfortunately bad stigma, but when things are done right that isn’t always the case,” Strife said.

The main event will feature Cody Guffey, who goes by the ring name, Brixton Nash, the current No. 1 contender for the Magnum Pro Championship. Nash, a lifelong wrestling fan, attended his first Magnum Pro show in 2015 and spoke briefly with Strife but figured that would be the extent of the interaction. Then, shortly after, he came across a Facebook advertisement for Magnum Pro workouts.

“I asked my wife, ‘Would you care if I did this?’ and the rest is history,” Nash said.

Nash was trained by Strife prior to his debut and has now worked his way to the top of the Magnum Pro card. He, like his fellow wrestlers, realize the magnitude of promoting suicide prevention amid the current world climate.

“It’s something very important to us, with mental health being at the forefront of a lot of things now given the pandemic,” Nash said. “It’s a cool thing to get behind.”

As for his business inside the squared circle, Nash is more than ready for his main event rematch against Redwing, the current Magnum Pro Champion.

“He and I went to war last time,” Nash said. “It’s time for a change at the top of Magnum Pro.”

Strife will also be in action during the show, putting his AIWF Cruiserweight Championship on the line against Kenny Alfonso. The full card can be found on the Magnum Pro social accounts across Twitter, Instagram and Facebook.

The day will begin with a few Magnum Pro wrestlers making an appearance at the Omaha Walk, followed by “People Are Strange” at the Stocks n Bonds event city at 6 p.m., followed by an afterparty.

More information, as well as online ticket purchases, can be found at magnumpro.ticketleap.com/peoplearestrange/ and supporting.afsp.org/index.cfm?fuseaction=donorDrive.event&eventID=7509.