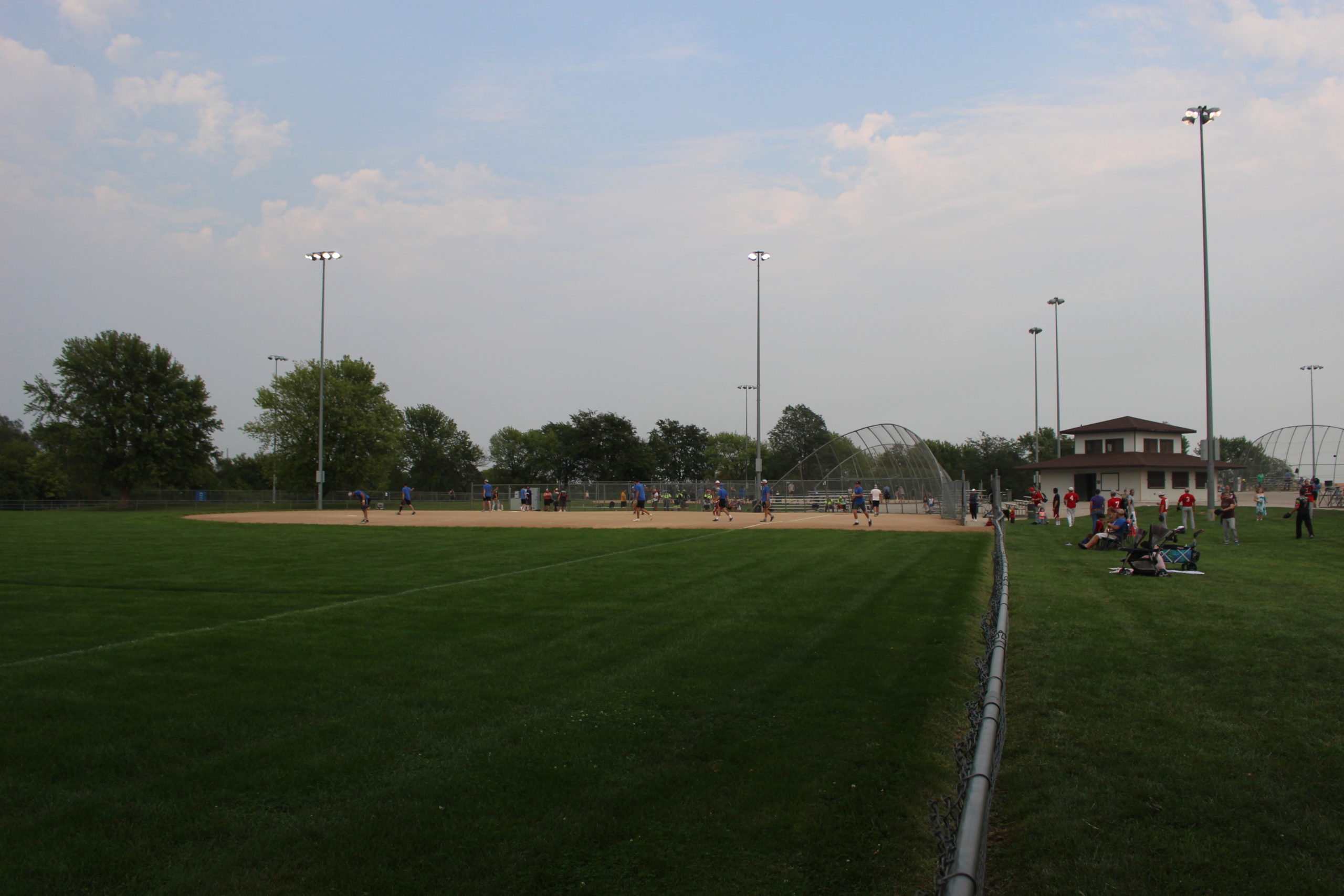 Brian Witt sticks out like a sore thumb standing alongside the decrepit white concessions house that is located in the middle of the Mahoney Parks softball complex. Witt’s Husker red jersey and gray baseball pants are tame in comparison to the many multicolored neon garments worn by other teams walking around on a Sunday evening in the fall.

“I’ve been in this league a whole 27 years and it never gets old,” said Witt, a longstanding member of the recreational softball community in Lincoln.

Witt’s gaze is set to Field Four where he watches the Big Daddies and Lincoln Truckers go back and forth, patiently waiting for his team, the Southview Sandlot Boys, to take the field. Witt and company will be facing Glass Edge, a team full of burly suntanned men in lime green jerseys with nicknames like “Marshmallow” printed in large font on their backs.

“People play because they enjoy the sport, but they also enjoy the community that surrounds the league and the relationships made during their years playing softball,” said Witt.

Around the country, parks and rec softball leagues are all-welcoming communities of diverse amateur-level athletes from an array of different backgrounds who compete on a weekly or even daily basis in hour-long softball games. These recreational athletes balance 40-plus-hour work weeks, social lives and family time all while risking severe injuries to not compete for glory or money but instead for the love of the game. Despite the ever-changing rosters, Witt was able to foster new and meaningful relationships with his teammates.

“We began in the church league 27 years ago, and since then our team has changed a lot as people left and new players joined,” Witt said.

Throughout his career, Witt has sustained many injuries, including a ball to the face that left him in a hospital with nine stitches above his right eye. Now with a family of his own and the wear and tear of a 27-year-career, he decided to play with the Southview Sandlot boys, the team that he started with.

“As I got older, and my family grew larger, it was harder to find time to be on multiple teams and balance time with my family, but I still find time on Sunday night to play some softball,” Witt said.

Down near the bleachers of Field Four, Heather Bayless, a member of the Sunday co-ed team, The Dreamkillers, talks with the fans in the stands waiting for their game against the Dirty Rottens. With nine years in the Lincoln Parks and Rec league, Bayless is one of the forerunners of an all-new female slow pitch softball league beginning next year.

“Give more opportunities for women around Lincoln to play,” she said. “We also just wanted another team to play on.”

Some of Bayless’s favorite memories include traveling to co-ed tournaments in Oklahoma, Texas and Missouri with many of her teammates, including Justin Louis, a five-year veteran of the league, who sits on the bleachers on Field One horsing around with a couple of his fellow “drinking buddies,” as they wait for their game to start.

Louis does not just play for The Dreamkillers, but said, he “plays for everyone” as one of many players who use the free agent portal on the Lincoln Parks and Rec website. Louis plays daily, and sometimes plays up to four games a day. The website allows players to meet new people and get players on teams that need them. Louis is well known around the league as players from opposing teams greet him as they walk by the bleachers.

“I am out here seven days a week, I just love to be out here and love to play. It’s very odd for me to go a week without softball during the summer,” Louis said.

Looming under a set of trees near the left-field of Field Four is Alex Martin, a member of the Ol Dirty and Friends, a name dedicated to the late member of the Wu-Tang Clan. Martin is dressed in his lavender T-shirt with the number “69” and nickname “A-Mart” on the back partly covered by his long black hair. Martin, in the league for three years, created the team on a whim.

“One of my friends, Trey, had suggested we should get together and create a softball team and it’ll be something fun to do during the summers, and so I did,” he said.

Martin and his teammates found out how tough slow-pitch softball can be in the early years of Ol Dirty and Friends when they did not win a single game their first season. Despite this, the team persisted, and with some roster changes and a switch to the Sunday’s Men’s Open league, they began to win more and more games each season.

“As bad as it was getting run-ruled every game, we still saw ourselves improving and the games were getting longer as we began to get the hang of it,” he said.

Slowly but surely, Ol Dirty and Friends were winning games left and right. Martin said he enjoys the competitive aspect of playing parks and rec softball, but in the end, what matters to him is having some fun with his closest friends every Sunday night at Mahoney Park.

“The great part of playing softball is the community, we’ve met a lot of new people in just the couple of years that we have been a team,” said Martin.

Whether you have played three, five, nine, or even 27 years of softball, this league is meant for everyone, said Monica Manning, athletic supervisor for Lincoln Parks and Recreation.

“Everybody can come out and have fun,” she said. “That’s why we offer this recreation program in a multitude of levels of play. So that hopefully we can appeal to them, to whoever wants to sign up and play.”

Manning is in charge of 160 teams and over 1,600 softball athletes for the leagues. Daily tasks include finding umpires to work the many games during the week and creating the schedules for all 18 leagues and their tournaments. Other tasks include updating flyers, sending emails and managing social media.

The biggest struggle, and what takes up a majority of her time, is finding officials after losing veteran officials because of COVID.

“It’s hard to get younger individuals to train and work and become an empire then do it for many years,” she said. “Then become those veterans that can turn around and train others.”

Despite a lot of sports shutting down for most of 2020, Lincoln Parks and Rec softball continued, thanks to Manning and her coworkers who worked with the local health department and other governmental entities so people could still get to play softball.

Changes included a sheet for players to sign up for contact tracing, spreading out fans along the fences and no more shaking hands after the end of a game.

“Coming up with those procedures beforehand where the world was changing on an hourly basis and maneuvering around those challenges was a big thing for us to overcome,” Manning said.

Luckily, the sport of softball is already socially distanced and takes place outdoors. Despite the challenges present, they were able to pull through and have a season. Manning said she felt it was important for people to get a break from life and come play some softball.

At the end of the day, Manning wants to foster a community of like-minded individuals who enjoy the sport of softball. To her, it is all about having fun and letting people get to play the sport.

“It’s nice to be at a ball field on a summer evening and a great way to connect with people while having the physical and social benefits for yourself,” she said. “That’s just what we do, it is what we offer to the community.”