Every year, thousands of high school student-athletes meet with coaches from across the country. Both parties are looking for the same outcome: to sign these athletes to a team. However, how much will the team and the athlete benefit from a signature on signing day?

Some athletes are more coveted than others, garnishing countless offers due to their high athletic abilityies. If they’re good enough, a select few will even grace the Top 25 recruiting lists in their sport.

An interesting trend is looking at where these players come from. While writing a story earlier this semester about 4-star Britt Prince, I realized that from 2012-2020, only one athlete in the state of Nebraska has been a Top 25 athlete in football, boys basketball and girls basketball. Only one athlete out of 675 has been from the Cornhusker state. I began to wonder why this is, so I put it to the test with data.

First, let’s look at the total number of Top 25 recruits by state, including Washington DC. 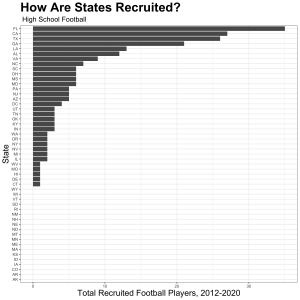 As we can see, Florida is the most recruited state with 35 total Top 25 recruits. California (27), Texas (26), Georgia (21) and Louisiana (13) round out the top five. 19 states have zero recruits over the nine-year time period, including Nebraska. 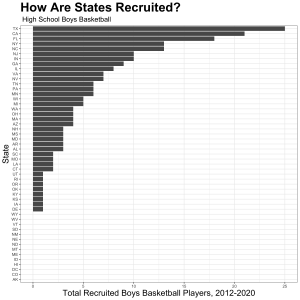 Let’s move on to boys basketball. Texas comes in first with 25 recruits, California is in second with 21 and Florida slides into third with 18. 14 states had no Top 25 boys basketball recruits. 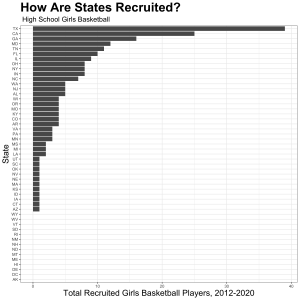 Texas remains on top in girls basketball with 39 recruits with California and Georgia finishing off the top three with 25 and 16, respectively. 14 teams also had no Top 25 girls basketball recruits.

Why are some states recruited so much more than others? My first prediction was due to population. It would make sense that a state like Texas, which boasts 29 million residents, would be recruited more than the state of Rhode Island with a population of 1 million.

For this example, I looked at the Top 25 recruits from 2020 in all three sports. Next, I divided the number of recruits in each state by the total population of male/female 15-19 year olds.* Lastly, I added a red line indicating the average number of students from the 15-19 age range who are recruited in the Top 25. By population, a state to the left of the red line is under-recruited, and a state to the right of the line is over-recruited. 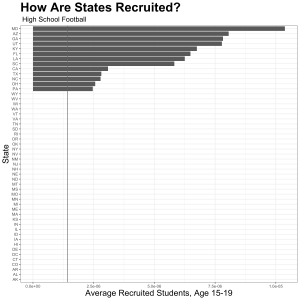 When considering population’s effects on football recruitment, we can see that quite a few states were over-recruited in 2020. For example, New York is the fourth-most populous state in the country with nearly 8.5 million people. However, it had no football recruits in 2020. Utah, the 30th-most populous state, was the fourth-most recruited by population. 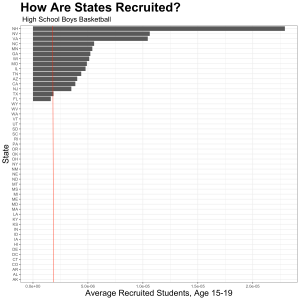 The story is the same in boys basketball. Both Texas and Florida were recruited almost exactly on average. However, most other states were either over or under-recruited. 15 states had a recruit in the Top 25. Again, New York had no recruits, whereas New Hampshire was top-recruited by population when it is 42nd in total population. 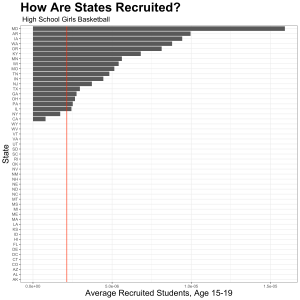 As far as girls basketball, again the story repeats. A few more states were close to average recruiting levels than in other sports (New York, Illinois, Pennsylvania). Maryland, who boasted three recruits in the 2020 Top 25, was by far the most recruited by population. Florida, the third-most populous state, had 0.

All three of these charts tell us that when it comes to recruiting, population isn’t a completely accurate way to explain discrepancies between states. Can it be used to make some predictions? Yes. But, is it completely fool-proof? No.

After I hit this dead end, I had an idea: Does the dominance of Division I programs have a direct effect on the high school recruits coming out of the states they call home? For example, does the state of Alabama produce more football recruits due to the Crimson Tide’s dominance nearly every year?

In order to calculate this, I organized AP’s Top 25 teams at the end of each sport season from 2012-2020. Then, I added up each states’ total number of top 25 teams over the nine-year period, and finally found the average number of teams the state has in the top 25 every year. 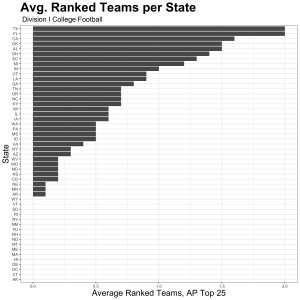 Per the data, this method actually seems to be a pretty accurate way to predict where recruits come from. The top-recruited states in football are Florida, California and Texas. As you can see, the states with the highest average number of ranked teams are Texas, Florida and California. Alabama, Ohio and South Carolina also sit in similar spots on both charts. In football, collegiate success may translate to high school recruiting numbers. 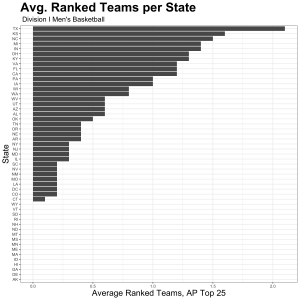 Men’s basketball tells a similar story. Although Kansas and Michigan aren’t as heavily recruited as their DI teams are successful, Texas, North Carolina and Indiana fit the pattern. 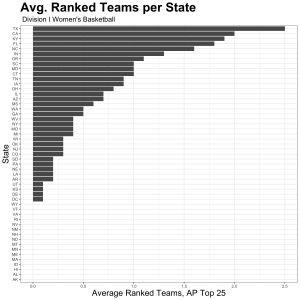 In conclusion, having more successful Division I programs does seem to correlate, at least somewhat, with having more Top 25 recruits.

Both of these data sets produce interesting possible explanations about why some states are recruited more than others. While I think both population and Division I success play a part in recruiting numbers, I predict that there are countless explanations, from weather patterns to socioeconomic status to youth sports popularity, that all work together to create the recruiting environment that exists today. Basically, after my research, I believe that there is no right answer to my question. However, I think this is what makes recruiting what it is: an unpredictable landscape of talent.