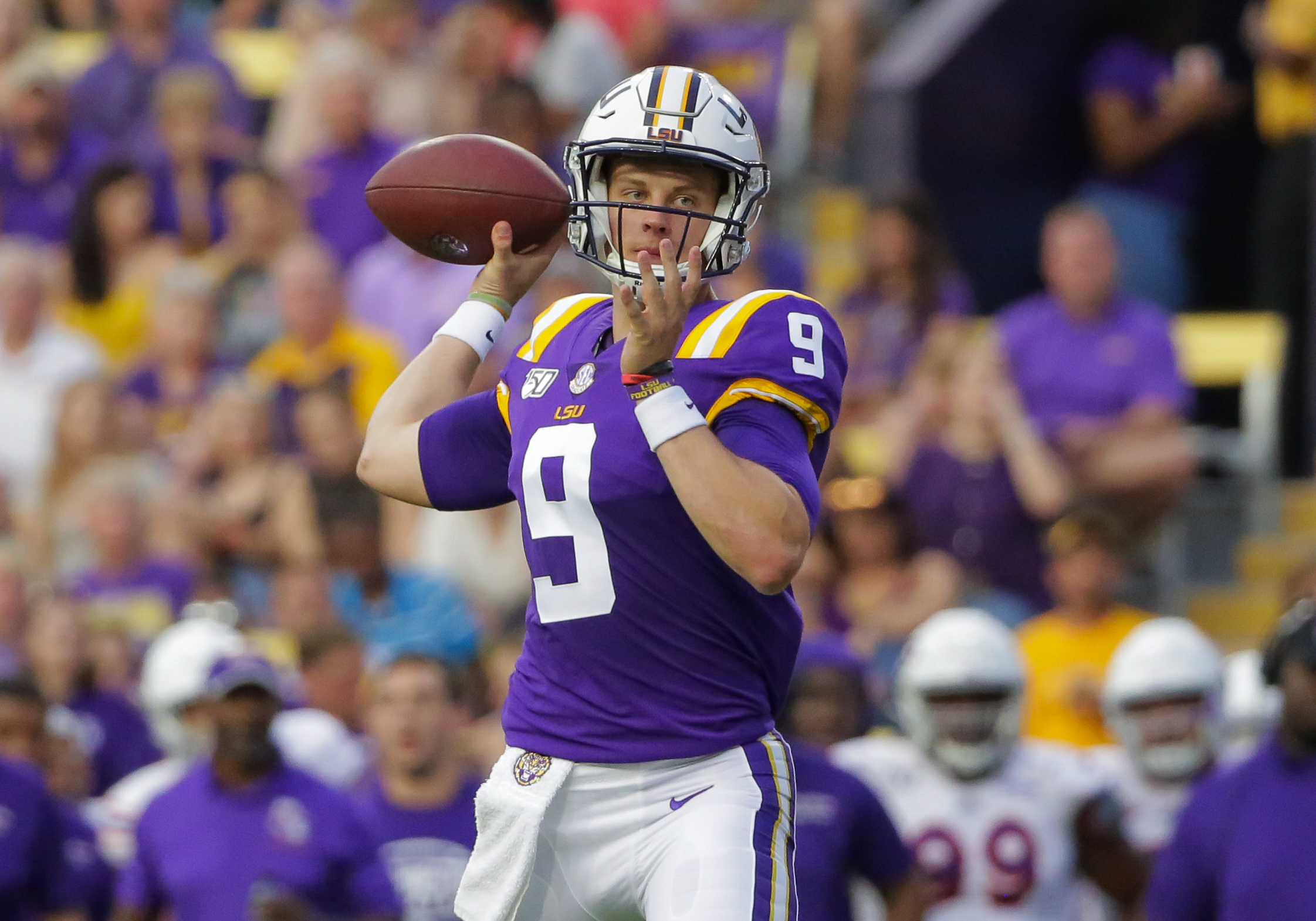 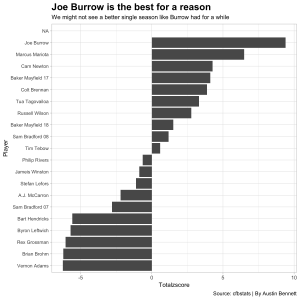 Did the kid from Ohio, that can do it all, have one of the best college football seasons we have seen in a long time? In the ESPN interview with Tom Rinaldi, Burrow wanted to be a Cornhusker and follow in his dad and brother’s footsteps who played at Nebraska but would life go as planned?  Well, for Joe Burrow his next dream took him to Ohio State is what he told Tim Rinaldi. Again, he sat on the bench waiting for his opportunity that never came. Burrow once again chose a new path where he transferred and ended up at Louisiana State University. From there, he started two seasons, leading the Tigers to an undefeated season and National Championship. Burrow also claimed the Heisman trophy in 2019.

The question after Burrow’s Heisman season was is he truly the best quarterback in the last 20 years?  The numbers say yes he is. The graph above is a z-score bar chart. The higher the z-score the better because it means a player is above the average out of the number of players.  This score takes variables like games played, passing yards, passing touchdowns, quarterback rating, interceptions, rushing yards and rushing touchdowns into one score. Using the quarterback rating is also a score within itself, which is what was the deciding factor in which quarterback was the definition of “greatest” in their respective year of playing.  A formula from the dictionary gives you the explanation and why the formula stays true to the numbers of passing statistics only. 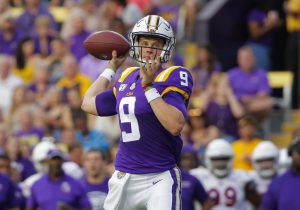 Burrow finished his Heisman season with a z-score of 9.4, which is almost three points higher than the runner up, Marcus Mariota, with a 6.48. Taking a deeper look at Burrow, just by looking at the numbers stands out far more than the rest of the competition.

With the National Football League draft right around the corner, many teams have their chance to draft a future franchise quarterback. Burrow had a 76.3% completion rate, which is second all-time for a single season. That stat alone could be the reason NFL teams are after him but even looking further into the stats he threw for  5,671 yards with 60 passing touchdowns which is video game numbers. He also only had 6 interceptions the entire year, that is one interception every 2.5 games. His passer rating was 202.0, which is the best out of all the quarterbacks in the last 20 years. Not only did Burrow have a phenomenal year passing he ran for 369 yards with 5 rushing touchdowns. He can scramble if needed and it sure helped him in the national championship where he ran for 58 yards and a touchdown to beat Clemson 42-25.

The games have been played and the numbers have been recorded. Joe Burrow by the numbers has been the best quarterback college football fans have seen in the last 20 years and it doesn’t stop here. We will be seeing Burrow on Sundays in the near future.