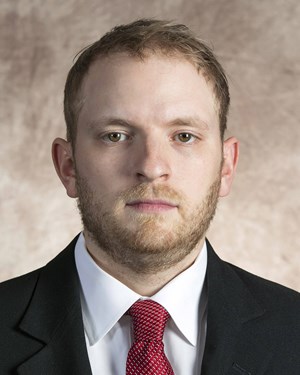 When you think of football, many think of some of the biggest, strongest individuals clashing together at rapid speeds, all while calculating each other’s every move.

These players need to have everything intact to be successful, which means what they do off the football field, needs to be calculated in the same manner.

Getting bigger, stronger and faster is the broadest part, where  the players need to get bigger, how they need to get stronger, and when they need to be faster. The complicated task comes at the utmost importance of a successful Division I football team, and it requires extensive thoughts and planning from particular people before the players put forth the physical effort to enhance their athletic abilities.

One of those people is Andrew Strop, who is in his fourth season as an assistant football strength coach at Nebraska. Strop has worked under Husker head football strength and conditioning coach Zach Duval at every stop of his career.

He worked as an assistant director of sports performance for football at UCF for the previous two seasons. Strop was a key part of the Knights’ greatest two-year turnaround in college football history. That helped Duvall win the College Football Scoop strength and conditioning coach of the year as the Knights moved from an 0-12 season in 2015 to a flawless 13-0 season in 2017, when they were the nation’s only unbeaten team.

“I was blessed to serve the players at UCF,” Duvall told FootballScoop.com. “This award is accepted on their behalf because of the sacrifice and determination they showed over the last two years.

“I want to thank each and everyone of them, from the fourth-string walk-on to the starting quarterback. And lastly, I want to thank my strength staff for showing up everyday and serving the players of UCF with me.”

Strop earned his degree in Allied Health Science from The College of the Ozarks, and he is a certified strength and conditioning specialist.

Strop has a very wide knowledge base when it comes to strength and conditioning, and brings an incredibly unique and scientific skill set regarding athletes improving their crafts. Some may describe Strops approach as ‘analytical’ in a sense, and brings that mindful swagger into the weightroom.

Strop said the key to the success of any strength and conditioning program is the players completely buying into the process. That’s something the Huskers strive to achieve every year with all the new players coming in via the freshman class, and the influx of transfer portal players the NCAA is witnessing amidst the COVID-19 pandemic.

The majority of the time, the players buy in once they start seeing results with their own bodies. Coach Scott Frost credited Strop and Duval for their incredible work regarding the plans to reshape the strength program.

The team has made an attempt to move away from the “old-school testing like we used to do” Frost stated in an interview in March of 2021.

Strop brings that ‘new age’ excellence, and provides a unique understanding of today’s athletes and their bodies, as well as implementing new exercises and workouts tailored towards the new style of play we are seeing in the game today, while keeping that 90’s grit and intensity.

Redshirt freshman running back Isaiah Harris raved about the strength program at Nebraska, and how it is not all based on lifting weights and getting bigger.

“The strength program here is amazing actually,” Harris said. “My first year here I didn’t talk to too many of the coaches, I just kinda stayed out of the way and did my thing, but over the past year I have gotten closer to Strop and the other strength coaches. I think Strop is a great strength coach”

Apart from physical workouts, some tend to forget about another key factor pertaining to player development, the mind. Strop expresses the utmost importance to players that mental stability is just as important as the physical attributes.

“He also loves just making sure everyone succeeds not only in the weight room but in life outside of football,” Harris explained. “ I was in the developmental group until last month and I noticed he really puts an emphasis on all kinds of life skills with that group.”

The developmental group typically includes a lot of freshmen and redshirt freshmen. This allows a lot of the newcomers to gain an understanding of what it takes to be successful at the power five level.

These groups were implemented by Duval, and Strop when they entered the program, and have had increased strength scores all around the board, and even more significant achievements adapting very quickly.

“He definitely is more strict with them because they are freshmen but he wants them to be ready for when they move up to the roster lift group which is what I’m in now” Harris said. “ In the roster lift he’s way more laid back and knows everyone knows the expectations to be successful. It seems like people are a lot more independent compared to the dev group”

Harris said there’s one component that will be most important for the upcoming season.

“The most important thing for training for the next season is just trying to make as much progress with body fat percentage and adding weight to all your lifts as possible,” Harris explained. “They really want us to take advantage before summer starts so they’ll have us do metabolic lifts for six weeks to really put on muscle before we condition.”

That is where the health science background comes into play for coach Strop. With the knowledge gained throughout his education and career thereafter, he strives to utilize that with the football team in hopes for more success each year going forward. Senior defensive lineman Casey Rogers, also praised coach Strop for his efforts outside of the weight room.

“Coach Strop is the man,” Rogers said. “He’s definitely a father figure to a lot of our players. We work with him every day so we see him the most out of any other coach. I could go to him for absolutely anything”

Strop has gotten the ‘buy-in’ from the athletes, now it is a matter of putting it all together into a coherent piece that shows it on the field. Player development scores are released every year at the end of spring ball, the expectation of improvement this year is at an all time high for the program.