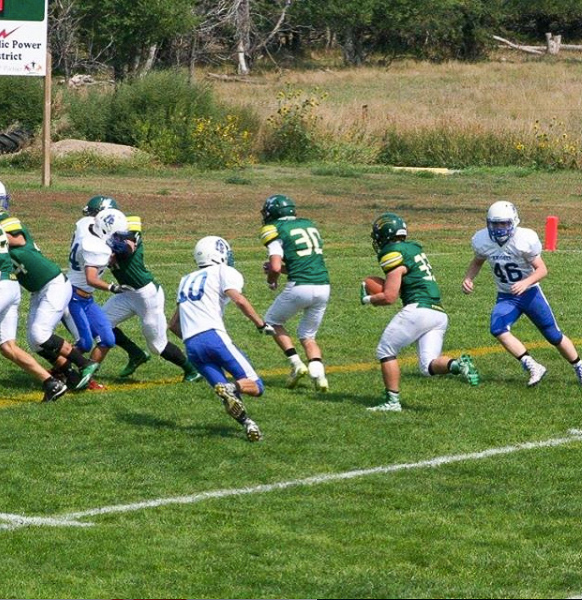 Created during the Great Depression by Stephen Epler from Chester, Neb., six-man football may look like a foreign game to some: Six players on the field instead of 11. Fifteen yards for a first down instead of 10. Every single offensive player is eligible to catch a pass. A field goal is worth four points instead of three, a kicked PAT is worth two points and a run or pass PAT is worth one point. Six-man football is a game of speed playing in space and survival.

“We’ve had teams that only had seven guys; we’d take anybody we could get,” Sioux County High School Coach Barry Swisher said.

Coach Swisher has seen it all over his years at Sioux County, a small high school located in Harrison, Neb.

“The big challenge right away when we dropped down to six-man was travel. We had to travel up to seven hours and stay in a hotel for one trip,” Coach Swisher said. “Now with a lot more teams dropping down, our longest trip is around two hours.

As of this year, the six-man high school football class in Nebraska has more teams than Class B does. The upswing in teams in six-man has brought more talented players to six-man football. One of those players being former Hay Springs High School running back, Trent Reed.

Reed had quite the career at Hay Springs. One memorable performance of Reed’s career happened during week one of his junior year when he rushed for 437 yards and seven touchdowns on 24 carries. This performance earned him MaxPreps player of the week.

“It was crazy. I averaged about 18 yards per carry that night, it felt like I only got tackled two or three times,” Reed said recently in a phone interview.

That’s the type of game six-man is. It’s incredibly high scoring even described by some as “basketball on grass.” Teams constantly score in the 50s, 60s, 70s and sometimes even the 80s. It’s about getting your athletes the ball in space and seeing what they can do.

“I played a little of every position. Most plays on offense, I got the ball and had the option to run or throw it,” Reed said.

Some view six-man as a game of trickery because every player is an eligible receiver, meaning even offensive linemen can catch a pass. Kids get a chance to do everything. At one point, Sioux County had a 6-foot-1, 260-pound lineman returning punts.

It is the type of game the small towns rally around. Bob Jensen, a publisher for HuskerlandPreps, sees exactly that.

“I go to games for all classes, you go to the big games in Omaha and the crowd is big and exciting, but with six-man, you get that same excited environment every single night,” Jensen said.

The old joke around small towns is always, “What is there to do there?” This is a valid question, but the Sioux County community has something to do every single Friday.

“We have afternoon games because we don’t have lights, so the whole town and community rallies around it,” Coach Swisher said.