A shrill high-pitched whistle cut through the cool, fall night air in Lawrence, Kansas, as the Jayhawk soccer team played under the lights of Rock Chalk Park. The white lighting flickered as the massive stadium lights lining the edges of the field, swayed.

Another whistle sounded off. This one, signifying the end of the women’s soccer match.

Within minutes, fans lined the path off the field, eager to give the players hugs and get autographs. The sound of cleats padding on the soft grass as they approached the small crowd of people that had gathered, got louder, but was soon swallowed up by cheers and words of congratulations.

One small child in the crowd was quiet. Her large hazel eyes were filled with determination as she clutched her poster of the team that would soon be filled with autographs.

Sinclaire Miramontez can’t remember how old she was, but she can remember the feeling she had. Soccer was in her blood, and as a young girl she attended all of her sister Sierra’s Big 12 soccer matches. 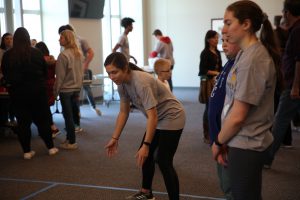 The now-senior soccer star came to Nebraska in 2016, and like most athletes who choose the Big Ten university that sits in the capital city of Lincoln, Nebraska, Miramontez was sold as soon as she stepped on campus. She was drawn to the facilities, the coaching staff and the overall strength of the program that excelled on a national scale.

But Lincoln had another draw that made Miramontez feel at home: her sister, Sydney played soccer at Nebraska from 2013 to 2016, and helped recruit Miramontez just as much as the coaching staff did. On her breaks from school, she would tell her younger sister about all the opportunities Nebraska presented.

“I just saw how much Sydney matured throughout her time here,” Miramontez said. “Especially during her freshman and sophomore years.”

Soon it was her chance, and upon arriving to campus in June before her freshman year, Miramontez found the key to her sister’s growth and development, herself.

It was because of a component of the athletic department called Life Skills.

Senior Associate Athletic Director Keith Zimmer started the program in 1987 as an addition to the athletic department because he saw a need that was not being met.

“As I would talk with collegiate athletes and I would ask them ‘What are your goals, what are your dreams, what do you want to do?’ and typically it was ‘I want to be a pro athlete,’ or ‘I simply don’t know,” he said.

Out of the athletes’ need for guidance came Life Skills. The program is dedicated to serving current and former student athletes through three-pronged model including development, service and leadership.

When Zimmer began it, he was the only one on staff. In 2019, it is managed by six full-time staffers, who help student-athletes acclimate to campus, grow during their time there, and prepare for post-college life.

One of these staffers is Stacey Burling, a former intern for UNL’s athletic department, who now helps advise soccer, men’s basketball, bowling, and some football athletes.

Working in the department for 11 years now, Burling has seen the impact the events make on the students’  lives during their time at Nebraska.

“People have said it just was kind of a constant within their experience here,” Burling said. “Something they looked forward to, that they got a lot out of.”

“One time, they taught my sister how to balance a checkbook,” Miramontez said, “and I think they taught them how to change tires, too.”

Despite the useful topics which Life Skills teaches the student athletes, Miramontez’s favorite is one where she gets to learn in a nontraditional way: by giving back to the community.

She does this by working with Special Olympics, an area that has always been near to her heart. And now, through Life Skills, she’s been given a unique platform.

“It’s just knowing that as a student-athlete, you can impact this community in more ways than another,” Miramontez said.

But the impact of the volunteer opportunities and events affect student athletes’ lives far after their time at Nebraska.

“It’s easy for us to see the importance of the events that we’re doing just because we’ve seen people graduate and move on and then come back and say ‘I’m so glad you guys did that with me,’ or ‘Because of that, I was able to do this,’” Burling said.

When Zimmer created the program more than 30 years ago, this was exactly what he had hoped for.

With roughly 1 percent of college athletes going on to play professional sports he wanted to ensure Husker student athletes would find a niche in college they loved. Not only this but find success when their playing careers would end.

“We’re not doing justice to those athletes if we’re not exposing them to more and preparing them for something with better odds,” Zimmer said, “[and] the idea was it wasn’t happening here.”

But presenting the students with the opportunities and encouraging them to get involved are all the staff can do. Aside from the four to five scheduled events a year, it’s up to the students themselves to make the most of their time at the university. 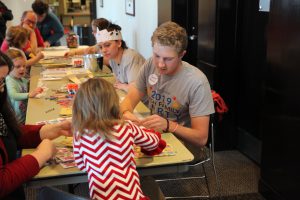 The junior golfer from Longmont, Colorado, was sold not only on Nebraska’s athletic facilities, but the way their support programs prepares athletes for the future.

“It’s definitely important to have a plan B, and I think they recognize that at Nebraska and they provide you as much opportunity as you could get, better than anywhere else I visited,” Pearson said.

And these opportunities are arguably the best in the country, with services that set it apart from other programs at universities across the United States.

“This program is a separator, and not every Division I school has a program like this,” Zimmer said. “Often times they may not even have a life skills program.”

Because of the program’s success in building well-rounded athletes, other schools use Nebraska’s as a model for their own.

Miramontez and Pearson are at the forefront of this. Both students hold leadership positions on the Student Athlete Advisory Committee. While its main goal is to enhance the student-athlete experience at Nebraska, it also meets with representatives of other Big Ten Conference schools and shares experiences and advice about programs like Life Skills.

“A lot of them ask us about what to do to get some of the things that we have, so that’s kind of really cool to see that,” Pearson said.

While this type of involvement is important, it’s only one pillar of the renowned support program that Nebraska has spent decades evolving and refining. For Miramontez, the young girls waiting after games to get autographs remind her of herself, and show her why her time at Nebraska has been so important.

“It’s been amazing to see it come full circle,” she said, “that Nebraska has given me the opportunity to be in the role that I wanted to be, that now I also get to impact the young girls that look and me and say, ‘I want to be a college soccer player one day.’”