Fans are rarely happy, especially in Nebraska, but in December 2017, Nebraska fans were happy. It was all rainbows and sunshine because Scott Frost was going to bring back Nebraska to glory.

His first year wasn’t great, but it ended well with a 4-2 record with single digit losses at Ohio State and Iowa. What does media do to a coach who previously went 13-0 in his second season at UCF and showed some improvement at the end of his first season as a power five head coach?

They pick a 4-8 Nebraska team to win the Big Ten West.

Well, Nebraska is 5-6, and the local media has now resorted to the notion that Nebraska needs to be better and a year and a half in the season things should be on the upswing. Let’s look at the data to see if Power Five head coaches in a similar situation to Frost actually made big jumps in year two.

Let’s look at three separate teams in the Power Five conferences who have had similar paths to Nebraska: historically very good and have struggled in the last 10 years. Three teams that came to mind: Tennessee, Texas and Michigan.

One thing was very clear when looking at the graph: each head coach took over a very low point of the program based on the standardized scores.

There is also another glaring similarity: not many coaches make a big jump in year two.

Both Texas coach Tom Herman and Scott Frost were once a coordinator at a powerhouse — Frost at Oregon and Herman at Ohio State — and had success in an AAC school. Both were then hired at historically powerhouse program. The graph shows that neither made large jumps in points per game and points allowed. Each improved some but only by a slim margin. 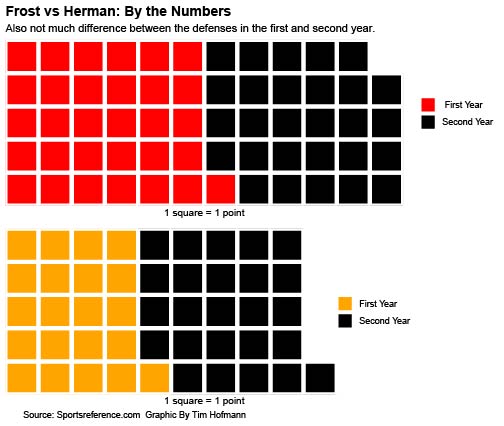 Tom Herman won a few more games than Frost, but many would argue that there were none of those four teams that were in worse shape than what Nebraska was under Mike Riley. This chart may have been helpful in the beginning of the season. Many coaches don’t make really big jumps in year one to year two, so maybe media and fans should have pumped the brakes on expectations.