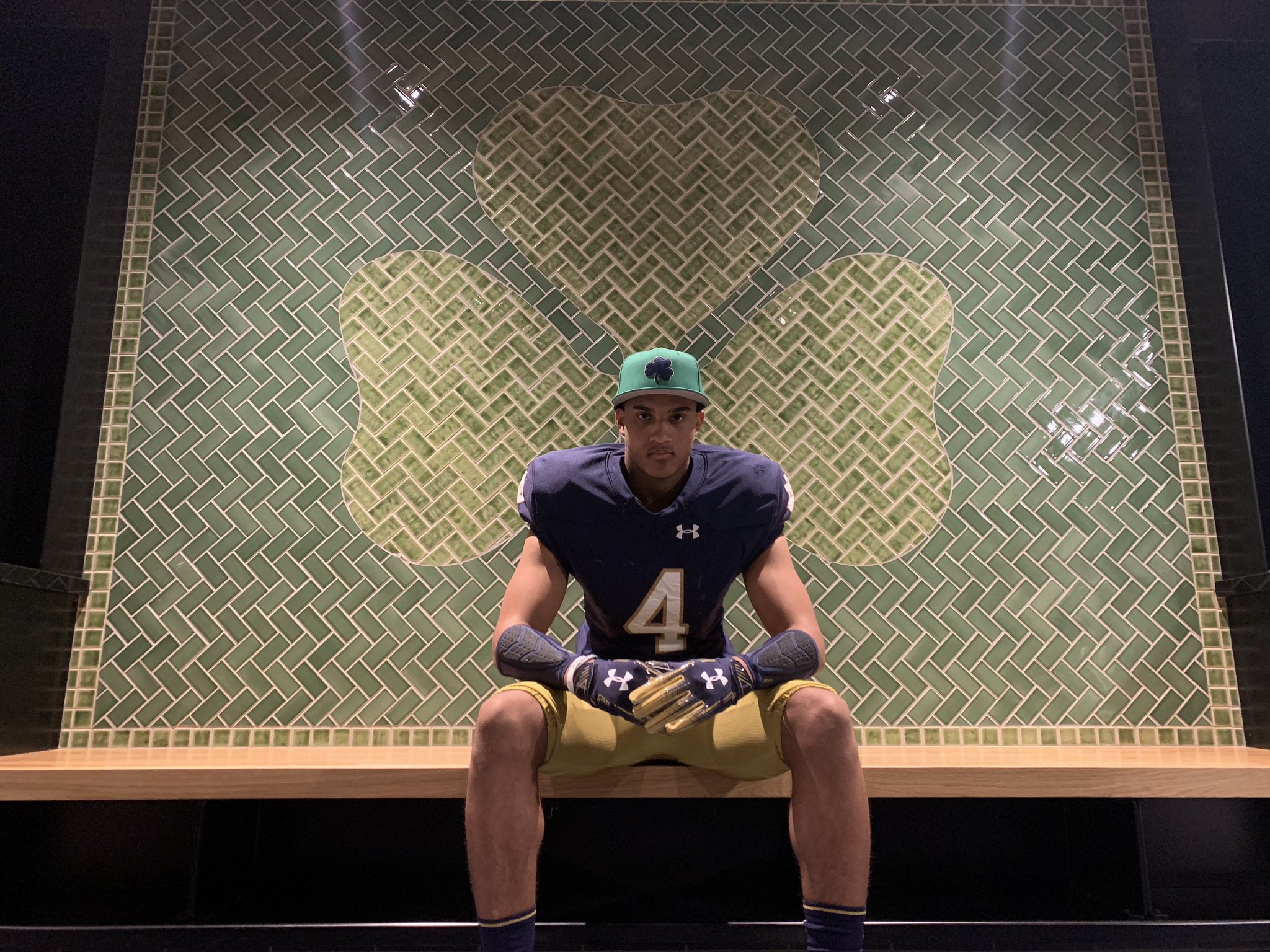 For Xavier Watts, it all started his sophomore year at Burke High School in Omaha, Nebraska when he caught his first pass as a varsity football player against Omaha Central.

However, catching passes isn’t all Watts can do.

“I knew eventually I was going to play both sides of the ball after my freshman year. I like offense better, but defense is just as fun,” early enrollee college freshman Watts said.

Watts believes his versatility, work ethic, personality, and skill level is what makes him such an important recruit for Notre Dame this recruiting cycle.

Throughout his three-year varsity career, Watts accumulated 2,978 receiving yards to go along with 36 touchdowns. He also added 136 total tackles, 90 of them solo, and nine interceptions on the defensive side of the ball.

Watts is the second player from Nebraska to commit to Notre Dame in the past 24 years and only 21 players from Nebraska have ever seen action for the Fighting Irish. Once Watts knew that Notre Dame was interested in adding him to its roster, he was immediately intrigued.

“It’s not as easy to get recruited in Nebraska, especially by a school like Notre Dame,” Watts said.

Watts took an official visit to Notre Dame on June 21, 2019, just before his senior year of high school began. Soon after on July 5, Watts verbally committed to Notre Dame and remained committed until the day he arrived on campus at the beginning of the new year.

Even though Watts never strayed from his commitment to Notre Dame, Nebraska tried its best to recruit him. Watts visited Nebraska once in March of 2019 and then again in April. He also attended multiple games in the 2019 season.

“I didn’t really want to decommit, but I was always thinking about Nebraska and it was really close between the two,” Watts said.

One area Notre Dame had a leg up on Nebraska is the recent success of its football program. In the 2018 and 2019 seasons, the Fighting Irish had a record of 23-3 including a trip to the College Football Playoff. Nebraska, on the other hand, won 13 games in the last three seasons, with no bowl game appearances.

However, this reason was not at the top of the list of reasons why Watts ultimately decided to play for Notre Dame.

“I got along with the players and coaches well, and you can’t pass up the great education and a really good football program,” Watts said. “Also, I wanted to challenge myself with big-time talent.”

Part of challenging himself included graduating high school early and getting to Notre Dame’s campus as soon as possible. This way, he can start to get used to his college classes and begin to compete for a spot in the starting lineup.

“I was excited to get up early and it’s been fun, but tough so far,” Watts said.

Early in the offseason at Notre Dame, the Fighting Irish have Watts lining up at wide receiver, but that doesn’t mean the two-way player in high school is scared to do the same in college. In fact, he’s confident he could be at the top of either depth chart for this year.

“Right now I’m on offense, but I would be willing to play defense too if needed,” Watts said. “The depth chart isn’t too deep for either side, I think.”

Still, Watts believes Notre Dame will return enough talent this coming football season to put themselves in the same position they were in two years ago when they faced Clemson in the national semi-final.

“I expect to get into the playoffs,” Watts said. “We have great pieces coming back.”

Notre Dame will face Clemson again this season to redeem the 30-3 loss it suffered in the 2018 Cotton Bowl Classic. Clemson has been to four of the last five College Football Playoff National Championship games and is just one of the teams Watts is looking forward to seeing on the field this season.

While Watts will be in uniform against Clemson, Wisconsin and USC, it is still not for certain if he will see the field. In his freshman year, Watts could be given a redshirt, meaning he can only play in four games during the season in order to save an extra year of eligibility.

However, redshirting isn’t in Watts’ plans at the moment, but getting on the field to make an immediate impact is. To do so, he knows exactly what needs to be done.

“I plan on playing more than four games but if the red shirt is needed I can’t really do anything about it,” Watts said. “I just have to make plays so they have no choice but to play me.”