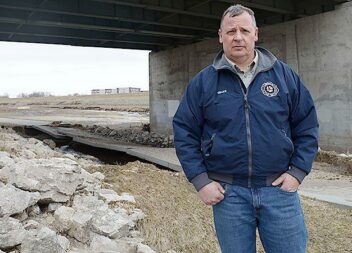 For Shane Weidner, making the call to evacuate more than 1,000 citizens on the morning of March 14 was not an easy one.

He hadn’t had much sleep, and he knew he could face criticism whatever he decided.

“There is a balance between crying wolf and calling the shot,” he said.

But in the end, the decision was one Weidner, as Norfolk’s public safety director, said he felt he needed to make.

“If something happened on a breach, you don’t have time to evacuate, so we wanted to be proactive with that and better be safe than sorry,” he said. “I really didn’t feel in my heart that we were going to have a breach, but I had no idea for sure. And I had no idea how much more water was coming exactly, and we were close to the top of the levee already. So it was a precautionary decision but a needed one.”

Essentially, Weidner’s role became a combination of meteorologist, structural engineer and crystal ball reader. Weidner said he had many factors to consider: the weather, the effectiveness of the levee system and citizen safety.

The decision to evacuate was days in the making and started earlier in the week when weather reports indicated that the Norfolk watershed would see a lot of incoming water.

Weidner said city officials were monitoring the water gauge for Pierce County that projected historical flood levels of about 17.6 feet. The highest flood level the city had on record was 15.1 feet in 1971, which had caused some damage to the levee, so there was concern about how would the levee fare if the city received the expected amount of water from rain and snow melt.

On Tuesday, March 12, Weidner toured Antelope, Pierce and Madison counties to get a close look at the snow accumulations and to evaluate water flow. At the time, Weidner said he wasn’t too concerned.

But on Wednesday, after the area received two inches of rain, the situation quickly changed.

“That was really the scariest part of it all — the river’s ability to jam with ice,” he said.

Norfolk’s problems began with the ice jams that caused water to back up. That puts pressure on the levee system, and everything fills up faster because of the backflow, he said.

Ice also was a problem in the city. A storm sewer that drains out to the east had been plugged with 125 feet of ice from the earlier cold spell, Weidner said. As a result, rain runoff that couldn’t get through the ice plug, cut its own channel into the city’s sanitary sewer system. The surge of water into the system caused pipes to burst and basements to flood in a few homes, he said.

From that point, the situation continued to escalate as water levels continued to rise along the Elkhorn River and the North Fork River.

On Wednesday afternoon, Lutheran High Northeast opened its doors to take in people who were affected by the flooding and had needed to leave their homes.

That’s when it was clear to Weidner that sleep would be a thing of the past. He was able to grab a quick nap at 1 a.m. Thursday but was awakened three hours later by a phone call from the Emergency Operations Center saying a person was missing after falling into the levee near the intersection of First Street and Benjamin Avenue.

The missing person was subsequently identified as 30-year-old Scott Goodman of Norfolk. After several attempts, rescue crews had to abandon the search because of weather and flooding concerns.

After evaluating the situation in the area of First Street and Benjamin Avenue, Weidner met with the Emergency Operations Center officials and the public works street superintendent to discuss the levee and to decide if the water levels were going to be an issue.

“We thought we better evacuate because if it continues to rise, and we get overtopping on the levee, I don’t know what will happen. We’ve never had that happen before. But then you can get some breakdown of the levee itself, which is the berming protection,” he said. “If that happens, and we get a massive opening in the levee, we will really be in trouble. We would start to see massive water coming in through town and a lot of flooding and life safety issues.”

Sometime between 5:30 and 6 a.m. on March 14, Weidner called City Administrator Andy Colvin and Mayor Josh Moenning to explain that the city needed to be evacuated and why. The order was then given to the police department, which had officers working double shifts at the time.

By 6:30 a.m., Weidner was working with local media outlets to explain the evacuations and the locations of the shelters.

The evacuation went smoothly, thanks to the mutual faith and trust between city officials and the citizens, Weidner said.

The city’s history of smooth evacuations made his call easier, Weidner said. He cited the 2009 evacuation when a 30,000-gallon propane tank caught fire and authorities feared it might explode.

And knowing what could happen was also on his mind, Weidner said. He compared a levee break to a bomb going off.

The water would burst forth and flood parts of the town.

But the city recently conducted a drill on the levee system and found that the system was in good shape, Weidner said. Without Norfolk’s levee system, there would be significant problems because the system diverts all the water around town to the east.

“When the levee water levels went down Friday morning, everybody took a sigh of relief and the city could then demobilize,” he said.

And Weidner could catch up on sleep.