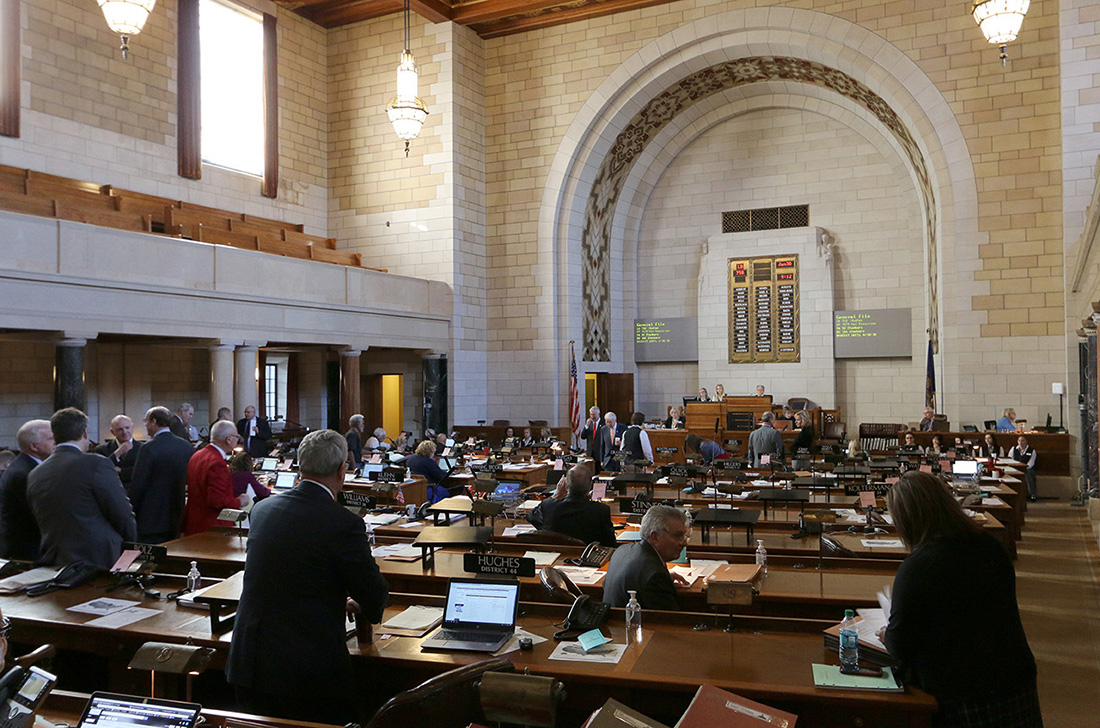 As a former student journalist, Sen. Adam Morfeld of Lincoln passionately advocated for the advancement of his bill, which creates the Student Protection Journalism Act.

On March 18, after three days of heated legislative debate, LB88 advanced with a 28-15 vote.

His bill would designate public high schools and post-secondary school publications as public forums not subject to article prior review. The bill also prevents student disciplinary action for exercising freedom of speech and press rights.

Student media advisers who are school employees are also protected from retaliation or dismissal for protecting students’ rights under the bill.

“What I see here is the learning that comes from students being empowered with the same rights that they have in society, and doing it under the roof of the school house…They are learning and they go on to do great things in life…” said Sen. Mike Flood of Norfolk, in support of the bill.

The bill had bipartisan support and is co-sponsored by several senators: Sens. Mike Flood of Norfolk, Julie Slama of Peru, Carol Blood of Bellevue, Michaela Cavanaugh of Omaha, Megan Hunt of Omaha and Mike McDonnell of Omaha.

Supporter of the amendments, Sen. Steve Erdman of Bayard, was concerned about loss of administrative control in public high schools if the bill passed.

Sen. Ben Hansen of Blair was also concerned about the loss of needed supervision in high schools.

“I feel with this bill we’re losing some of that regulatory supervision…to guide students in a safe manner,” he said. “I don’t feel like students are journalists. They are students learning about journalism.”

Opposing senators discussed the 1988 Hazelwood v. Kuhlmeier Supreme Court decision. The court ruled that schools can prevent the school-sponsored publication of articles that are inappropriate or inconsistent with school values. The decision also said the paper was not a forum for public expression because articles were for academic purposes.

“The point of this bill is to provide expanded rights for students,” Morfeld said. “If they violate these limitations…the school can still stop publication. They must adhere to all the standards and limitations to have protection.”

Slama said the bill provides a “great framework” for student expression under the supervision of a faculty adviser.

The bill would not protect student journalist expression that:

Flood was a high school journalist and said it teaches students how to question authority and talk about difficult and important topics. He supports the bill and said the pros far outweigh the cons.

Sen. John Lowe of Kearney did not support the inclusion of high school student journalist protection in the bill.

“Sometimes when you’re in high school you need to keep your mouth shut…Learn what the people in authority are trying to teach you,” Lowe said. “I’m not trying to stifle free speech, but I do want speech that’s right.”

After Halloran’s amendment failed, Sen. Joni Albrecht of Thurston introduced her own after receiving concerned letters about possible Planned Parenthood advertisements in publications. Her amendment would not allow students to be responsible for the advertising content of publications.

“The purpose for K-12 education is to prepare our young leaders for the real world…one of the ways we do that is through real-life experiences,” Morfeld said. “The point of this bill is to provide expanded rights to student journalists to be able to express their opinion with limitations and guardrails.”

Morfeld invoked cloture after a full eight hours of debate, which is a legislative motion used to stop debate and have senators vote on the bill and any amendments.

After the cloture motion passed with a 33-12 vote, Albrecht’s amendment failed and the bill advanced to the next round of debates.