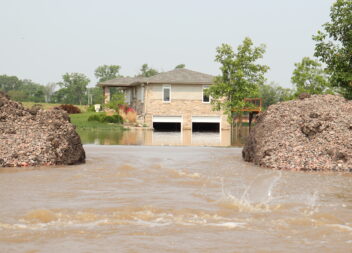 Two months after the historic flooding of March 2019, Cass and Sarpy counties in eastern Nebraska are being flooded by the Platte and Missouri rivers again, causing damage to and forcing people out of their homes.

The Plattsmouth Emergency Services Department released a warning through their twitter account for those in previously flooded areas to evacuate last Tuesday. Roads and bridges in the area were closed, and sandbags were put in place to protect homes and infrastructure.

Cass County Emergency Services Director Sandy Weyers said the county was making efforts to mitigate the flooding and recommended people leave the affected area, but there was little they could do to stop the river’s rising.

Weyers said she attributed the rising river to heavy rainfall this spring and an increased amount of water being released from Gavins Point Dam near Yankton, South Dakota, by the Army Corps of Engineers.

Because of the uncertainty surrounding the flooded river’s future, Weyers said she couldn’t say what to expect.

Weyers said most of the work to stop flooding was preventative and done before the flood season. During the floods, her department does its best to stay out of the way.

Weyers said those near the river should watch the water level and be prepared to get away at a moment’s notice.

When interviewed on May 31, Weyers said Gavin’s Point was scheduled to increase the amount of water released by 5,000 cubic feet per second to a total of 75,000 cfs. While it was a substantial increase, Weyers said she did not expect the effects to be catastrophic.

Weyers said the most difficult part of floods was the inability to predict just how bad the damage would be.

“Floods are just so unpredictable,” she said. “I can’t tell you that it’s going to be ok today and not tomorrow.”

In Sarpy County’s Hansen Lake area, Frank Lebedz and his family had several lake houses harmed by the flooding of the Platte. Of their eight structures on the Platte, six of them are too damaged to repair by the floods in March.

Because of the recent flooding, Labedz and his family members were forced to work to salvage the two remaining structures. Of the six destroyed structures, only one of them was insured.

The Labedz family owns ten acres on the Platte that has been in their family since 1954. Along with the cabins, the family also lost a waterfall and two small ponds due to the flooding.

Labedz said some flooding was normal for them to experience, but this year the water reached up to seven feet high in their main cabin, and trees washed into the property, breaking windows and destroying the homes.

People in the Hansen’s Lake area were dissatisfied with the Army Corps of Engineers handling of the flood waters, Labedz said. They felt the Corps prioritized other things above the safety of them and their homes. Weyers said she heard similar complaints from the residents of Cass county.

For Lebedz and his family, the only option now is to move forward and salvage what can be fixed.

“It’s a pretty sad thing, when you grow up here, so you’ve just gotta move on the best you can,” he said.