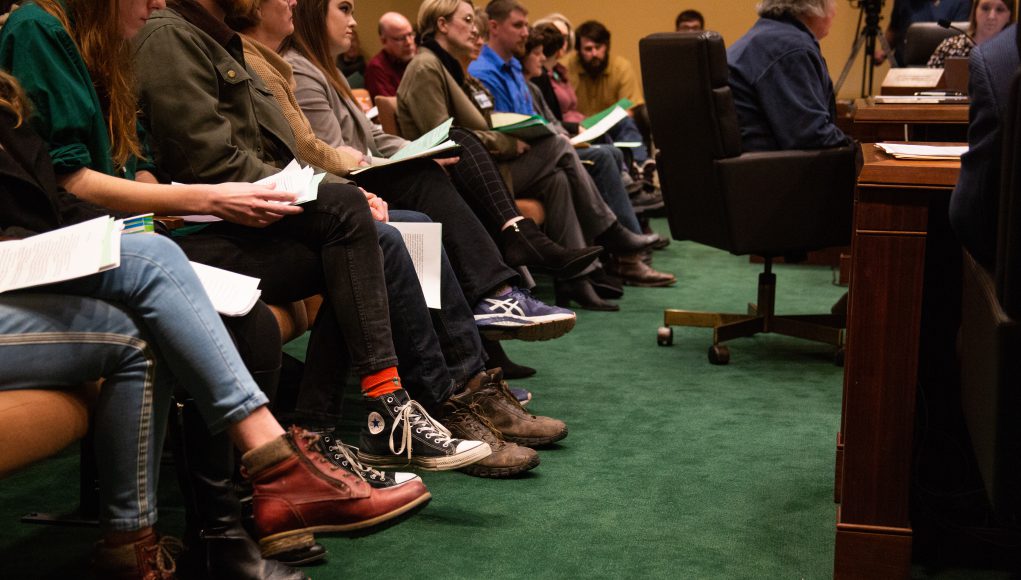 Sen. Dan Hughes of Venango sipped a can of soda and scanned the filling room of climate change resolution testifiers in the Nebraska State Capitol Feb. 20. Testifiers and those there only to observe- old, young, and every age in-between- filled the seats and quietly waited through the agenda for the day until it was time to begin the hearing for LR 294, a bill that would address climate change.

“Our resolution is not a big step, but it is a step,” said sixth-grader Clio Baird. “The climate is changing, so why aren’t we?”

Baird, Albrecht and other students in the Prairie Hill Learning Center Adolescent Community drafted a resolution stating that the Nebraska Legislature has a moral obligation to take steps to combat the climate crisis. More than 40 people testified in support of the resolution. Students, teachers, mothers, farmers, religious leaders, citizens, and retired senators testified on the issue.

Adah Wisnicki, 11, also in the Adolescent Community, had a part in writing the resolution that asks for Nebraska Legislature to acknowledge that climate change is happening, that it is driven by human action, and that something must be done about it.

“My class is asking for the bare minimum. It is not making any drastic changes, requests or proposals although those will be necessary in the near future,” Wisnicki said. “People like me in my class don’t have time to wait around to be adults to make a change.”

The adolescent students described the events they were learning about in their classes such as the recent fires in Australia, expansion of deserts, and extreme weather like what Nebraska experienced with the flooding last spring.

“Why does it take a catastrophe to make us realize we need to be mitigating climate change?” Anica Brown, a science teacher for Lincoln Public Schools said during her testimony.

Brown said she was there not to speak on behalf of her school district, but to stand with students around the world and in support of her grandchildren who, she said, “deserve to have a future that is sustainable.”

Smith said he was worried that the Amazon rainforest, Australian Bush, and California redwoods would be thought of more as a fantastical landscape to future generations, and that future kids would see pandas, polar bears and tigers the same way he saw dinosaurs as a child.

Smith also said that he was aware his generation is often made fun of for their connectivity through the internet. He said it’s that same connectivity that gives so many of them such a keen awareness of the development of the climate crisis.

“If you still won’t listen to me, or listen to us, listen to the evidence- to the facts,” said Archer Noordhoek, another student at Prairie Hill Learning Center.

“I want you to tell me that I can’t have an equal opportunity for the future as you did,” Noordhoek said during the hearing.

Teachers and parents were not the only adults testifying in support of the youth. Organizations and programs such as Nebraska Interfaith Power and Light, Nebraska Conservation Voters, Spring Creek Prairie Audubon Center, and League of Women Voters of Nebraska representatives testified in support of LR294 as well.

University of Nebraska-Lincoln junior and president of Sustain UNL Brittni McGuire spoke directly to Hughes, expressing her disappointment in comments he had made previously about treating the hearing as little more than a learning experience for the youth.

McGuire said she believes the senators can learn what being a good leader looks like by watching the youth as they act with empathy and fight through adversity.

“No one is here doing this today to hear you all say, ‘Good job.’ We’re here today because this is serious and you cannot silence us,” McGuire said.

Prairie Hill Learning Center and University of Nebraska- Lincoln students both said they are not there for a field trip or to learn how the legislature works. They were there to speak as citizens of the state. Many said sitting in classes and learning about the topic of climate change doesn’t feel like enough.

“What is the point in sitting in a room a mile away when there are people sitting in this room who aren’t doing anything with the information I am learning? It’s hard to focus knowing that,” said Kat Warner, a sophomore at UNL who chose to skip classes to testify at the hearing.

“Let these children, the leaders in the back of the room, lead us,” Executive Director of Prairie Hill Learning Center Jordan Hope said during her testimony.

More than 100 letters were also submitted by the Natural Resources Committee in support of LR294.