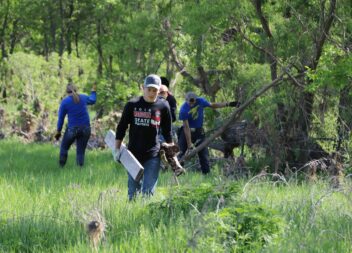 Eight Future Farmers of America students traveled to a ranch on the Loup River near Columbus on May 23 to rebuild fences and clean up debris from the devastating flooding last March.

The students were connected to the service project by the University of Nebraska-Lincoln’s Extension office, a branch of the University that focuses on education and service to all Nebraskans. Extension has been particularly active in flood recovery efforts, and they are working hard to help farmers and business owners through the flooding aftermath.

The junior high and high school students traveled nearly 100 miles to help an affected ranch rebuild by moving downed tree limbs and debris into piles and cleaning up the pasture land.

They also walked along over a mile of barbed wire fence that had been damaged by the flooding, removing debris and repairing the fence as they went. Armed with wire cutters, rakes, gloves and a skid loader, the crew worked from 9:30 a.m. to about 3:30 p.m.

Despite the hard work and the scale of the disaster, the students worked cheerfully, playing music and joking around with one another throughout the day.

Zachariah Kerwood, a student at Meridian High School and president of the Tobias-Meridian FFA chapter, said the group had just formed earlier this year. The group is working on increasing their role in their school and they have done a few other events in their community.

Kerwood said being from an agricultural background made him understand how flooding affects a community because his community was flooded a few years ago. That experience helped him realize the importance of coming together to help those affected by natural disasters.

“I like doing good, even if its not in my community, and if anything like this would ever impact me I’d want someone to come help me too,” Kerwood said.

Sarah Wollenburg, an agriculture teacher and FFA advisor at Meridian High School, said she heard about the project through the Saline County Extension office. She was proud to see her students working on such an important project and learning the importance of helping others.

Wollenburg said she hoped students learned the importance of giving back, and that the impact of their actions mattered greatly to the people they were helping through a tough time.

“It’s unfortunate that this happened,” she said, “but it’s cool for these kids to see that this stuff does happen, and if you’re able to come out and help, do it.”

Extension Educator for Saline County, Randy Pryor, helped to connect the students to the project. Pryor said the help the students were giving the ranchers was likely to be an emotional lift to them as well as a physical task.

“I think something positive like this can really help the psyche of the owners,” he said “ I think it helps them take a step in a positive direction.”