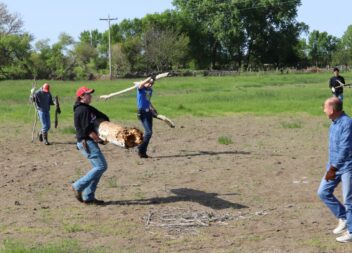 The day began by pulling up in our University of Nebraska-Lincoln minivan to an old, unused gas station called T-Bone Truck Stop. There we met smiling faces of the students from the Tobias-Meridian Future Farmers of America chapter who were preparing for the long day of cleaning up and repairing fences. Rita, the ranch owner, was briefing the students on what the day would consist of. She even warned of the common sight of snakes in the corn stalks that warranted a random scream.

Three of the eight UNL College of Journalism and Mass Communications students working on flood recovery coverage were led through potholes and washouts to a pasture near Duncan where the FFA chapter immediately got to work moving fallen limbs and digging through corn stalks to find the remnants of the fence. The ground was soggy in most places, but along the fence it seemed to be puddles. It didn’t take long for the students to be splattered up to their necks in mud.

The mud wasn’t a deterrent for these eight individuals who seemed to be working circles around us. The only sounds we heard were the crashing of logs on designated burn piles and the occasional laugh. The commitment to serving farmers affected by the flood was apparent and louder than any laugh we heard.

We were especially moved by the moments spent connecting with some of the high schoolers. This was one of their first days out of school for the summer, and it was spent giving back to a Nebraska community.

“It really just hits home. You really can’t fathom what these farmers are going through, but we all have a tie to agriculture. If it’s anything about agriculture, we’re all one big community,” said Sarah Wollenburg, the agriculture teacher and FFA advisor of the Tobias-Meridian chapter. “What other industry in the world would do that? Agriculture is so closely related to everyone that we’re so willing to drop what we’re doing to help out.”

This agricultural industry is the foundation of Nebraska and our community here. Whether it’s lending a cup of sugar or rebuilding someone’s home, Nebraskans help each other out and make sure no one gets left behind and washed away. Watching these students dig in and volunteer their time and energy was extremely telling of our state and its future. There will be a hardworking generation to come, and they will be ready to assist in any way they know how.