As COVID-19 continues to take its toll across the country, Nebraska may just now be facing the worst of it.

New numbers from the U.S. Centers for Disease Control and Prevention show that nearly 600 workers across 12 meatpacking plants in Nebraska tested positive for the coronavirus in April, with at least one death, and as of May 5, things are getting even more serious.

The newest numbers from the CDC show that six of the nine most infected counties in the state are: Dawson (Tyson Foods), Dakota (Tyson Foods), Saline (Smithfield), Hall (JBS), Colfax (Cargill) and Adams (Western Reserve), all of which house a major meatpacking plant.

For Dakota County, it’s Tyson Foods’ largest plant in the United States that is being hit.

The plant, seeing a spike in positive cases in its workers, sidelined some 4,300 workers recently, by temporarily halting production.

The plant had been scheduled to restart production Tuesday, but Tyson postponed the reopening to await results of COVID-19 tests for its workers.

For Madison County, the plant that is raising concerns is a Tyson plant as well.

South of Norfolk, the plant changed operations to a reduced schedule Friday and Saturday so all of its estimated 1,500 workers, vendors and contractors could be tested, a Tyson spokeswoman said.

On Thursday, 96 workers had tested positive, according to the Elkhorn Logan Valley Public Health Department.

In Schuyler, The Cargill beef plant is shutting down temporarily as well, and in Fremont, it gets even worse.

The Lincoln Premium Poultry plant in Fremont, which carves up and churns out more than 1 million chickens a week, announced the death of a worker who had contracted the coronavirus, with others testing positive as well.

For those still working in these and other plants around the state, the situation has been received with much caution, according to Eric Reeder, president of the United Food & Commercial Workers Local 293, an organization that represents meatpacking throughout the state.

These comments come after about 50 workers at the Smithfield Foods pork plant in Crete walked off the job after company officials announced that the facility would remain open, just hours after they had said it would close to contain the outbreak and maintain a high priority of safety for the workers.

The walkout wasn’t union-sanctioned, but a local union representative said the walkout does highlight the stress many workers are beginning to feel as they continue to work as their coworkers become sick, and as the continuous news of plants around the state becomes more severe.

“They’re scared,” Reeder said. “They want the company to be more transparent.”

Reeder said employees are worried that they’ll catch the virus from a co-worker and bring it home to their families, and that they were caught off-guard by Smithfield’s sudden change of direction just before their walkout.

He said plant officials have taken some preliminary steps to address some of the concerns, including reduced work hours while still providing a full day’s wages, and putting up barriers on the processing line and in the plant’s cafeteria.

He also said he would be working with plants around the state to tackle the issue and hopefully stop it before it becomes more serious.

However, Nebraska has remained one of only five to have no stay-at-home order and has begun further relaxing restrictions throughout the state.

Douglas County Health Director Adi Pour said that regardless of these newest relaxations however, the plants that are seeing continuous spikes in cases are trying their best.

“It could be that these individuals are bringing it into the plant from their home and community environment,” Pour said. “So we need to protect both sides of it; it’s not only the meatpacking plant. The meatpacking plants, I can tell you, we have been on phone calls with them, they are really trying to do the best thing they can.” 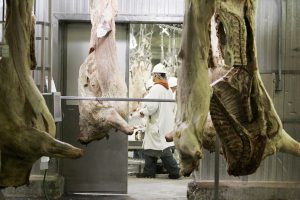