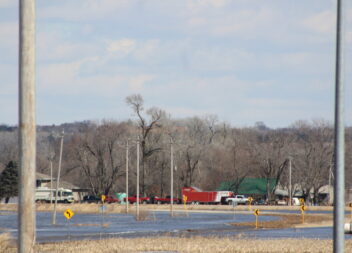 Since a rare blend of winter weather, ice-clogged waterways and a “bomb cyclone” led to major flooding along the Platte, Niobrara, Elkhorn and Missouri rivers in mid-March, thousands of Nebraskans have lost access to water, more than 1,000 miles of Nebraska roads have been closed and the state has suffered approximately $1.4 billion in damage.

Floodwaters began receding around March 19 in most parts of the state after the rivers reached historic levels, but many rivers are still at heights considered to be flood levels, according to Mike Wight, a spokesperson with the Nebraska Emergency Management Agency.

“What that means is that the water that’s out on the field and out at people’s homes still can’t go anywhere,” he said. “It’s going to sit there, but it’s not going to go away completely.”

Though water will remain standing in fields, the situation won’t get worse any time soon, Wight said, unless heavy rains hit the state in the next few weeks. But because the flooding was caused by the collision of winter and spring climate weather, flooding on that magnitude isn’t expected. The worst of the damage has been done.

“We’re probably still going to get rain and thunderstorms and, hopefully not, but probably tornadoes in the next two or three months,” Wight said. “And we just hope that it isn’t too bad.”

David Pearson, a hydrologist with the National Weather Service in Valley, said contrary to concerns that runoff from the Rocky Mountains would create further flooding, the mountain snowpack is actually lower than in recent years. The main concern is a new wave of rainfall coming in early April, which could drive floodwaters up again. Heavy rains are not in the forecast, however.

“It will all depend on how much rain we get,” Pearson said.

But the bulk of the recovery process is still ahead for Nebraskans who were affected by the flood. At the time of publication, four communities — Peru, Boyd, Lynch and Spencer — are still without drinking water and have been depending on NEMA-provided bottled water since the flood. Plattsmouth’s wastewater treatment facility is also completely waterlogged, and the city has issued a water emergency order to ask residents to conserve as much water as possible.

At the height of the flood, over 1,000 miles of roads were closed, but that number has since dropped to around 200 miles of road closures. Major remaining closures include Highway 12 and Highway 14 near Verdigre and Crofton, Highway 22 and Highway 14 near Fullerton, Highway 39 near Silver Creek, Highway 275 in western Douglas County and I-680 in Omaha near the Iowa border. Call 511 or go to 511.nebraska.gov for more road closure information.

More than 200 FEMA responders have been deployed to Nebraska, as of March 31. FEMA registry sites are or will be set up in each of the counties eligible for aid, where flood survivors can sign up for assistance for uninsured or underinsured losses. FEMA staff go door to door to meet with survivors at their homes to explain how they can help.

Wight advised that survivors who sign up for FEMA assistance make certain that the people at their front door are credentialed FEMA employees, as there is the potential for scammers to take advantage of people in need. FEMA responders display their badges when introducing themselves.

“The fear is that you will find someone who doesn’t understand the system, they’re in desperate need of help to get their home fixed back up, and someone shows up at the door and says, ‘Well, for $100 we’ll help you out,’” Wight said. “People need to be aware of that.”

FEMA won’t be able to provide a cure-all for flood victims, Wight said, but they can help people get back on their feet. The American Red Cross is providing assistance in affected communities, as is the Small Business Administration, which is offering low-interest loans.

FEMA’s presence in Nebraska also means NEMA will take on a smaller role after all hands were on deck for close to three weeks. FEMA will take it from here, Wight said.

“Historically, it’s just about as big an event as we’ve ever had to experience,” Wight said.