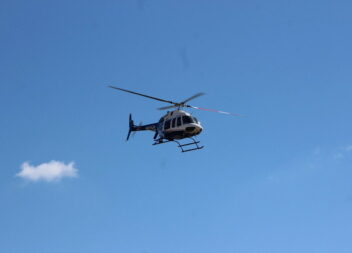 Most wake up for an early morning coffee, some prepare their gardens for the upcoming Spring, some sit on their back deck watching a few cars drive by per hours as they talk with family and other stroll through the neighborhood up to the local park.

However, this March began much different than most.

Experiencing what some called a “500 year flood,” much of the Midwest was devastated as snowmelt and rain reached levels too high for many dikes, levees and dams to hold.

Valley was no exception.

Normally the home of just over 2,200, Valley, Nebraska grew in size the day of the floods. Becoming refuge to dozens of individuals and animals from the surrounding King Lake and rural landscapes that encompass the town, Valley was a hotspot for ensuing water rescues around the state.

Lying just miles from both the Platte and Elkhorn river, Valley was the perfect place to search, by helicopter and water-specific vehicles, for those in need.

Witnessing the water rescue vehicles and helicopters up close all day long in town gave me a great scope of just how dangerous these waters were.

Watching women, men, children and animals being rescued all day was a humbling experience. After all, these were my neighbors, the people I wave to when I drive up and down my street.

These people, now desperate for help from oncoming water, were my friends.

The photos below are an attempt to invite you all into my town and meet the people who helped those closest to me during their most dire time of need.