Stopping mid-conversation to put on his facemask and grab the door, Matthew Smith welcomes crew members, in full hazmat suits to his room, as they hand over the Coca-Cola he ordered to have delivered to his room. 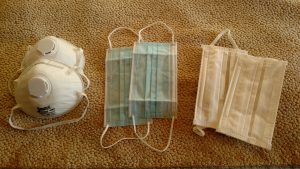 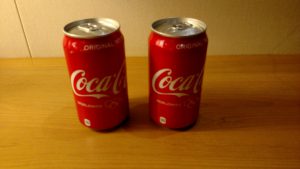 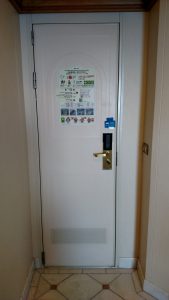 Smith, a lawyer from Sacramento, California, locks his door, takes off his mask and returns to his phone to explain what it’s been like to be confined to his room on board the Diamond Princess, a cruise ship docked off the coast of Yokohama, Japan, for the past week.

The ship has been quarantined ever since a passenger from Hong Kong, who embarked in Yokohama on Jan. 20, and disembarked in Hong Kong on Jan. 25, was diagnosed with the 2019-nCoV coronavirus upon his departure.

Since then, a total of approximately 219 people have been confirmed with the virus on board, making the ship the place with the highest number of infected people on Earth outside of mainland China.

Because of this, Smith said, this trip is one he will never forget.

He and his wife, Katherine, have been on Princess cruises in the past and have experienced a much different adventure than the one they had anticipated.

Instead of partaking in the ship’s “freshly prepared sashimi, street performances, lavish production shows and its Izumi Japanese Bath,” he and his wife now faced quarantine instead.

Confined now solely to their room, a suite-style space that is “approximately 460 to 932 square feet,” according to Princess, Smith was now in for a unique experience. 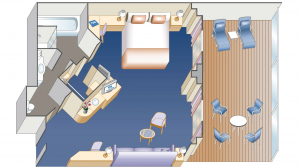 “It’s surreal because you’re on a nice cruise and suddenly you’re still on it, but now stuck in your room and the ship’s not going anywhere,” Smith said.

As the rumors and murmuring within the ship swirled, the reports from the rest of the world began coming in quickly as well, Smith said.

“We hadn’t even started hearing about the virus until we were on the cruise,” Smith said. “The CDC hadn’t warned to cease all travel to mainland China until we were already in Taiwan.”

In the meantime, more than 6,000 miles away, Tyler Shepherd, an American from California, was facing roughly the same situation. 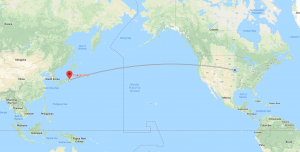 Shepherd, his wife, and their one-year-old, Neal, were in Wuhan, China when the 2019-nCoV coronavirus first broke out.

Fighting to catch a flight out of the region, Shepherd and his family were evacuated and brought to the United States with fears that they may have the virus.

Arriving at Eppley Airfield in Omaha, Nebraska, the three of them, and 54 others were being taken to quarantine as a precautionary measure at Camp Ashland, an Army National Guard facility located near Ashland, Nebraska, along the Platte River.

Like Smith and the roughly 3,000 people on board the Diamond Princess, Shepherd, his family, and the other 54 Americans in Nebraska now faced many of the same obstacles, according to Lisa Kort-Butler, an associate professor of sociology at the University of Nebraska-Lincoln.

Kort-Butler, who specializes in people’s experiences with stress, coping, physical well-being, mental health, substance use, and law violation, saw many similarities between the two situations.

“I think the distinction between the folks who are just kind of stuck on a ship versus the people who are stuck at our military bases right now, like Camp Ashland, is that they are both confined to, essentially, military quarters,” she said.

Being quarantined like that, she said, can potentially cause someone to feel very trapped and vulnerable.

“When we talk about stress and people trying to cope with stress, not knowing, especially when it comes to health conditions in general, can be stressful,” she said

However, both individuals have been coping with their situations in different ways and making the most out of their confinement.

Opening up an account on Twitter that he hadn’t used for years, Smith has begun tweeting to pass his time.

Setting out with a goal to stop the spread of misinformation surrounding his situation, he said, he began sending out updates on everything he experienced, ranging from daily meals to news. 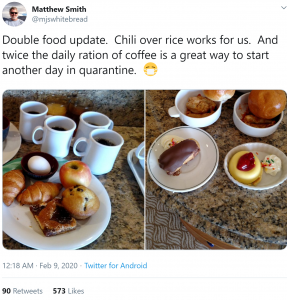 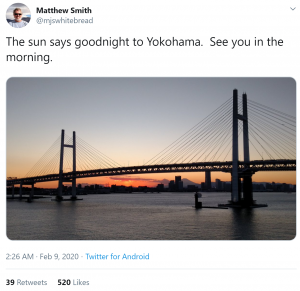 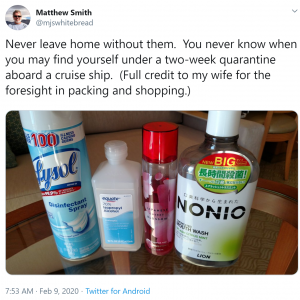 He also began to spread positivity and words of encouragement about his situation as well, and he said when faced with something like this, you can’t let it get to you.

“Its international travel, stuff happens but what’re you gonna do, stay home and not go, not see the world because you’re scared,” Smith said. “That’s just not the way we’re living.”

He also said a reason he is remaining positive is due to his stoic outlook on life.

On the other side of the North Pacific, Shepherd said he and his family have been passing the time in a different way.

He and his wife have been helping Neal learn how to walk and have been exploring the little bit of outdoors they’re allowed to venture into within their confinement.

Positivity, in both cases, waivers at times.

“We’re still nervous and everything because anything could happen,” Shepherd said.

Smith reiterates this. “Thinking about the rest of the days can get overwhelming,” Smith said.

And this is normal for people in these situations, according to Kort-Butler.

For all those in quarantine around the world, and for both Smith and Shepherd, Kort-Butler said, the impact of confinement can become daunting.

“The longer it extends, in addition to sort of the compromised physical health, I think that they’d have to start worrying about the sort of overall mental well-being,” Kort-Butler said.

In the meantime, as they wait out their quarantine, both are receiving constant updates from the outside world.

Shepherd is in constant contact with officials at Camp Ashland, while Smith said he is receiving regular updates from the U.S. embassy in Tokyo.

“The first thing we are going to do when we get back to the U.S., is we’re going to go find some tacos,” Smith said. “My wife is having taco withdrawals.”