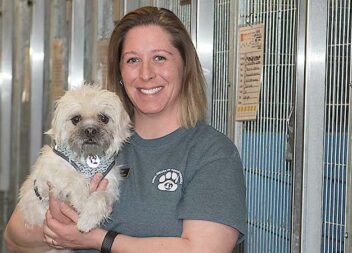 With goosebumps up and down her arms and a lump in her throat, Lisa Doescher put it succinctly: “Everybody was concerned that at any minute something could happen.”

On March 14, as city officials asked one-third of Norfolk to evacuate due to water in the levee system nearing its top, the Animal Shelter of Northeast Nebraska — where Doescher works as its manager — found itself in the evacuation zone.

What to do with the more than 50 animals, including dogs, cats, a bird and a ferret, that were at the shelter?

Doescher, who lives in Beemer, was unable to lend a hand because of sleeting rain and dangerous road closures. But she worked with her staff who were able to make it to the shelter and they all agreed: community members were the reason all the animals were evacuated safely.

“Initially, the staff put all the dogs and the cats in kennels and placed them in our loft area,” Doescher said recently while sitting at her desk in between duties at the shelter. “We thought that, at the very least, they would be safe from the water. … We would’ve had to have 12 feet of water in here. But then we were able to locate enough places to move the animals to.”

Doescher said the shelter’s van was put to good use, and many community members volunteered their own vehicles, which allowed the animals to be transported to new locations.

Although she cautioned against any volunteers putting themselves at risk, everyone made sure all animals were displaced to Madison County Veterinary Clinic, volunteers’ homes and Happy Trails Boarding.

“And I tell you what, they did it because it’s more important to them,” Doescher said. “I have the best team.”

Like many other places, the flood could’ve destroyed the animal shelter, but because the levee held, there wasn’t any property damage. Water came all the way up to the building and up to the front entry, but stopped there.

Doescher explained how she never thought of something like this happening.

“It’s historic,” she said. “The fact that the levee was so close to the top? How could you ever imagine that there would be that much water? That’s scary. I mean the water came clear up here. We had dead fish in our grass. I hope I never see that again.” At the same time, she said, “I’ve never been so proud of anything in my life.”

The shelter’s mission to give animals homes had started in the mid-1990s as a foster program. Those involved quickly realized that they needed a building, and the shelter opened in March 2016.

“The scary thing is, we’re run completely off donations,” she said. “We have no guaranteed funding. So, obviously it’s always a nip and tuck when you’re a nonprofit, and the fact that the flood could’ve taken this all away? That’s what gets me.”

Apart from a loss of a lot of hard work, Doescher said such a loss would’ve been harder on the community.

“We’re finally known by a lot of the community as a place that they can use whether it’s for boarding … a place where you can find quality animals that are fully vetted, and a safe place to take any animals,” she said.

When asked if there were prior evacuation plans established, Doescher shook her head.

“Because who would’ve thought? You know it actually went very, very smooth. The staff here are wonderful, and they’re all very dependable. They just took it on, and they handled it,” she said.

Having a disaster or evacuation plan set in stone would’ve made the situation easier, she said, so it’s a consideration for the future.

Although many believe they can only help financially, there are various opportunities for community involvement at the shelter.

Adopting an animal will always be the biggest form of help, she said. Volunteering at the shelter is another opportunity. Doescher emphasized that there are several different things that people can do at the shelter, and for any ability. Lastly, advocating for the shelter is also helpful.

Doescher said she is very grateful that her prayers were answered in protecting the shelter and its animals. It’s because the shelter holds such an importance in so many people’s lives, including hers.

“I’m glad that we were spared,” she said, “It was like there was an invisible fence that God put there.”